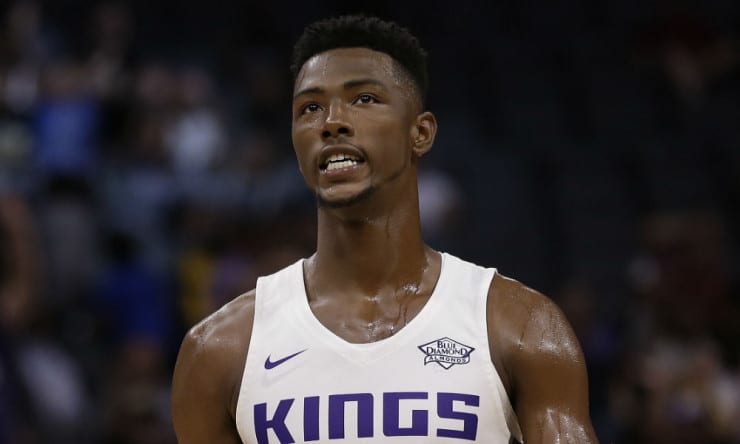 The Sacramento Kings are in an interesting position. Behind a buzzer-beating three-point shot from Bogdan Bogdanovic, the Kings were able to secure a win over the Los Angeles Lakers. Bogdanovic’s shot capped a huge comeback for the Kings. The win also placed the team back into the top eight in the Western Conference. The night before, the Kings came close to completing a huge comeback over the Clippers in Los Angeles.

While there might be some temptation in Sacramento to use this opportunity to make a move to further cement their playoff chances, Kings vice president of basketball operations Vlade Divac spoke recently to the Athletic, discussing the need to have restraint.

“If I have to do something to help them, yeah I will do it. But not just from desperation and to sacrifice everything that we’ve built,” Divac said.

Charging the Kings turnaround this season has been, in large part, the strong play of secondary players like Willie Cauley-Stein and Bogdanovic. Guards De’Aaron Fox and Buddy Hield have both hit new heights as franchise leaders. Rookie big man Marvin Bagley, recently slowed by injury, has been a significant contributor and has shown flashes of the potential that made him a top draft pick last summer.

While Bagley has garnered more national attention, Kings fans have been eagerly watching the development of 20-year-old big man Harry Giles III, the 20th pick of the 2017 NBA Draft. The Kings have a habit of overstocking their roster with big men, which has placed Giles in a situation where he has to fight for frontcourt minutes. This season, Giles has bounced back and forth with the Kings G-League affiliate, the Stockton Kings. Basketball Insiders spoke exclusively with Giles recently about his development and his time in the G-League.

When asked who has been most supportive of his development, Giles named a few mentors.

“[The] bigs, just taking me under, teaching me the way and let me know I got next,” Giles said. “Kosta Koufus, Willy Cauley-Stein, Zach Randolph for bigs. Iman Shumpert too, for guards.”

Kings fans had hoped that after sitting out what would have been his rookie season, Giles would be more likely to have a breakout rookie season. Instead, Giles is averaging 5.3 points and 2.7 rebounds on less than 50 percent shooting in 10.1 minutes per game. While his numbers and impact haven’t been dynamic necessarily, his teammates made it clear they see a bright future for him.

“I love him. I love his heart. I have a soft spot for anybody that can match the energy of a game or change the energy of a game,” Shumpert said. “I feel like Harry’s heart is so big. He plays ball with good intentions. When you do that you, you always put yourself in a position to be successful.”

Koufus sees a bright future and strong character in Giles as well.

“Not only is he a tremendous player on the court, he’s a tremendous person off the court,” Koufos said. “He’s a hard worker, he’s super talented, he can pass the ball, he can score, he’s athletic. The sky is the limit for him. For him, he understands that it’s going to be a little bit of a process but when he gets the opportunity to play, he’s been tremendous for us.”

Of course, the opportunity to play has been the most difficult part. Giles has made less obvious contributions, such as helping to push the pace, which has been such an important part of the turnaround this season for the Kings. Giles has also expressed confidence in his ability to do more when he does get the chance to play.

“It’s on the way. Once I get out there and earn more minutes. Just come into my game and be free, have some fun, it’ll all come out,” Giles said.

Giles emphasized that he has been putting a lot of work into different areas to try and round out his game.

“Probably just defending. It’s not difficult but it’s a lot of different things. You got to put together with calling out the screens, the way you want to cover it and so many different things you have to do, positioning to get the rebound too. You got to be smart with things like that. It comes with time, it comes with experience. It comes with guarding different players. I think you guard every player in the league, it’ll change up. But for the most part, it’s great,” Giles said.

The Kings have once again sent Giles back to the G-League allowing him more playing time. With Giles not currently in the rotation, he will have to continue to wait for and earn his next opportunity. To the credit of Divac, it appears the team won’t be making any drastic moves, such as trading Giles, in order to boost their playoff chances.

“I’m just hoping that he gets that opportunity to play more and more and get that experience he needs to transform into what I know he could be,” Shumpert said.