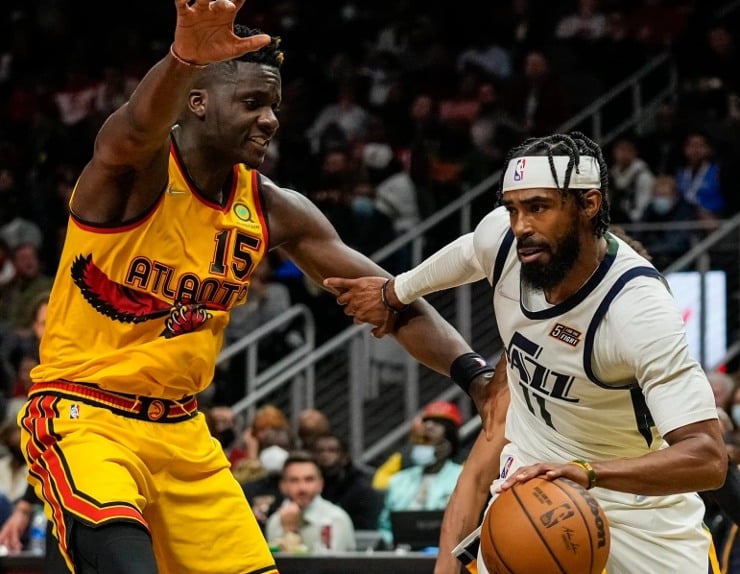 ESPN’s Basketball Power Index: Jazz have a 80.8% probability of winning

Referencing Land of Basketball’s database, these two teams have played one another 107 times in the regular season. The Jazz are 56-51 all-time versus the Hawks. In the past three head-to-head meetings, Utah is also 3-0 against Atlanta. On Nov. 4, 2021, the Jazz won 116-98 on the road. Besides recent performances, the Jazz are 7-3 versus the Hawks in the last 10 head-to-head contests. With all things considered, the information above explains why Utah is heavily favored for tonight’s game.

Leading into Tuesday night’s intraconference matchup, Hawks forward John Collins is having a great season. He scored 12 points in the first quarter of the team’s 127-113 road loss versus the Warriors. Of course, the last time the forward scored at least 10 points in the first quarter was against the Lakers during the 2020-21 season. That game was played on Mar. 20, 2021. For the Jazz, their top story is the organization assigning shooting guard Jared Butler to the Salt Lake City Stars, the team’s NBA G League affiliate.

Additionally, in the Hawks’ 127-113 road loss versus the Warriors, guard Trae Young scored a team-high 28 points in 32 minutes played. Forward John Collins ended his performance with 19 points, 6.0 rebounds and 1.0 assist in 31 minutes of action as well. Atlanta had a season-high 65 points in the first half. Though, their shortcomings caught up with them. The Hawks were outscored 44 to 30 in the paint. And, Atlanta was outscored 41 to 20 in the third quarter.

In their fourteen-point loss, the Hawks shot 38-for-82 (46.3%) from the field and 17-for-43 (39.5%) from three-point range. Plus, the Hawks’ losing streak is now extended to four games. After their sixth road loss of the season, they are 1-6 away and 0-7 ATS away. This will entice gamblers to pick their opponent to cover the spread in road matches.

Furthermore, on Sunday, in Utah’s 107-100 upset loss against the Magic, center Rudy Gobert and Donovan Mitchell led their team in scoring, finishing their performances with 21 points each. Gobert also closed out his showing with 15 rebounds and 1.0 assist in 34 minutes played. For a simple, unbiased analysis, the Jazz had no business losing this game.

Moreover, the total for tonight’s intraconference contest is set at 222. According to the spread consensus, 56% of gamblers are expecting the Jazz to cover the spread. This percentage should be higher, but the team lost on the road against Orlando. Regarding the point total consensus, 54% of bettors are hoping the total will go under 222. As of yet, Atlanta is 4-2 as a selected favorite, 0-5 as an underdog and 0-7 ATS away, whereas Utah is 7-3 as a favorite, 0-0 as an underdog and 2-1 ATS at home.

Likewise, for the Jazz, they are 2-4 ATS in their past six games. Also, the total has gone under in five of their last seven performances. And, the team is 13-5 SU in their previous 18 games played versus Southeast Division opponents. Lastly, Utah is 2-4 ATS in the team’s last six contests when playing as the selected favorite.

Pick the Jazz to win at home, they will cover the spread and the total will go under 222. Utah is an eight-point favorite with BetUS.