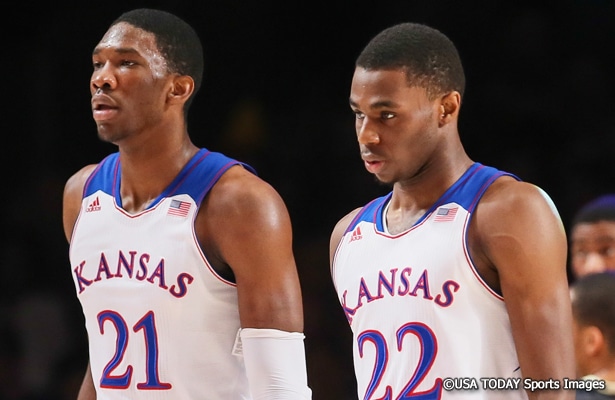 As we get closer to the 2014 NBA Draft, the debate over who should be the top overall pick continues to heat up. We asked Basketball Insiders’ Joel Brigham, Alex Kennedy Jessica Camerato and Jabari Davis who they felt should be the first player picked this June.

Prior to Jabari Parker’s offensive explosion, and before teammate Joel Embiid burst onto everyone’s radar as a potential defensive force, Andrew Wiggins was the consensus (presumed) No. 1 pick of the upcoming 2014 NBA Draft.

Not that Parker and Embiid, among others, haven’t been perhaps even better than advertised, but Wiggins may very well end up recapturing the momentum he once had when all is said and done. With Embiid out with a fracture in his back, reportedly until the second week of March Madness, helping Kansas make an impressive tournament run as the world watches would likely do just that.

What has been unfortunate and even unfair to Wiggins is the fact that he has been somehow criticized for not standing out as enough of an individual talent. In essence, he has been penalized for adopting coach Bill Self’s team-oriented style.

In what alternate, “Twitter sports logic” universe do we live in where a young player with superstar potential is actually punished in terms of public opinion for approaching the game in the right way while giving maximum effort at both ends of the floor? If you’ve been paying attention to his game rather than simply analyzing the box scores, you’d see that not only has Wiggins still managed to lead a very talented and balanced group of Jayhawks in scoring (17.1 PPG), he is also routinely matched up against the opposing team’s best scoring threats from the wing.

The 6’8 swingman utilizes his 7’0 wingspan to wreak havoc on the defensive end. From posting seven multi-block performances to the six games of three steals or better, Wiggins has shown the potential to be an absolute defensive stopper on the perimeter at the next level.

Not to mention the fact that he’s easily one of the best athletes of all the draft prospects, and can also shoot from the perimeter. As with most 19-year-olds in his position, he’ll have to continue to work on his frame and strength over the next few years, but there’s a chance he hasn’t even finished growing yet. The scariest thing about him is that even with all he’s shown to this point, you get the sense that he’s barely scratched the surface when it comes to his ultimate potential.

There’s certainly nothing wrong with selecting Embiid, Parker or any other prospect with the top pick, but if you want the player with the most complete package and highest potential ceiling, you’re taking Wiggins.

If Joel Embiid wasn’t dealing with a stress fracture in his back right now, this might not even be a debate. After entering the season without much hype, Embiid put together a monster season and won over NBA decision-makers.

He had a number of dominant performances this year, including 16 points, nine rebounds, five blocks and two steals in a win over Iowa State as well as 13 points, 11 rebounds and eight blocks against Oklahoma State.

When Embiid entered the season, he was described as very raw since he had only been playing organized basketball since 2011. However, he has made huge strides in a short period of time and displayed a jaw-dropping package of versatility, athleticism and fundamentals.

Star centers are extremely hard to find, which makes Embiid even more valuable. If Embiid is able to realize his full potential, he may become the best center in the NBA – capable of dominating on both ends of the floor.

I recently talked with an NBA scout, who raved about Embiid.

“He has had the biggest impact on this draft so far,” the scout said of Embiid. “Entering the season, the conversation was about Andrew Wiggins, Jabari Parker and Julius Randle, and then scouts starting falling for Embiid. Scouts were falling in love with him and then looking over their shoulder hoping that no other teams were noticing how great he looked. Obviously, he kept improving and the secret got out.

“He’s able to do so many things at his size that nobody else can. He has amazing footwork, great athleticism, nice touch and a beautiful stroke on his shot. He may have the highest upside in the draft because he still has so much room to grow. … His footwork reminds me of Hakeem Olajuwon and his power, outside shot and skills remind me a little of Patrick Ewing. He could be really, really good.”

If a team has a chance to land the next Olajuwon or Ewing, you don’t pass on him. There are a lot of great players in this draft class, but Embiid has the chance to be very special. Assuming his injury isn’t serious and the top pick doesn’t go to a team that already has a long-term answer at center (such as the Sacramento Kings), Embiid should go first overall.

If the Milwaukee Bucks or Philadelphia 76ers (or whoever) draft Andrew Wiggins with the first overall pick this June, there’s no way to call that selection incorrect or idiotic.  It’s not common to see college players drop 41 points in a game and Wiggins’ athleticism, offensive chops and potential are arguably better than anybody else’s in the draft.  It’s why there was a time earlier this season when he was called the biggest can’t-miss No. 1 overall pick since LeBron James.

So why are we having this debate?  Because Jabari Parker.  That’s why.

Call it a gut feeling, but Parker just looks like a more NBA-ready player than some of the other top prospects in his class.  Not only is he more polished and more consistent than his contemporaries (his 18.8 PPG and 9.0 RPG led Duke this season and topped Wiggins and Joel Embiid in both categories), but he also has a more mature, muscular frame that should make him more physically prepared to take on the league.

Defensively, he has a lot of work to do, but he’s easily among the best scorers in the college game.  Comparisons to Carmelo Anthony aren’t unfounded at all, as he’s exactly the kind of big small forward that could spend a lot of time in the NBA at the four.  Anthony, for example, has been owning defenders the last few years in exactly that role.

The fact that he can rebound as well as he can is a bonus, but the thing about Parker is that he’s not only willing but excited to learn more about the game and be coached.  He puts in a ton of time in the gym, and when a player is that devoted to the game and that motivated, it very often equates to a very good NBA player.  Mix in all that talent, and there’s absolutely no way this kid misses as a future NBA All-Star.

Wiggins can alter a franchise, but he may be a couple years further away from doing so.  Embiid’s injury issues are a bit disconcerting, especially if we’re talking about a year in which equally (or arguably better) options at the No. 1 pick exist.  Dante Exum, Julius Randle and Marcus Smart all are good, but not on par with the top three guys available in this draft.

If the team with the top pick wants a savior, and they want him to start saving right away, it would very difficult to build a team around a better player than Jabari Parker.

In a season when NBA Draft talk has been dominated by the likes of Andrew Wiggins and Jabari Parker for months, that leaves several players overshadowed by the buzz. But just like in 2007 when all eyes were on Greg Oden and Kevin Durant and players such as Al Horford and Mike Conley Jr. deserved attention too, there are others in the mix who will be contributors in the pros next season.

So let’s go against the grain here for a moment and consider a prospect who will travel thousands of miles to begin his NBA career: 18-year-old Australian guard Dante Exum. Given his age and the fact he plays overseas leaves a lot of unknowns. Those circumstances also lend themselves to the potential for a high-risk, high-reward situation.

The 6’6, 188-pound Exum has been lauded for his athleticism, which includes his ability to get to the rim. He has proven his power to drive the basket to both finish and create for his teammates. Exum has a high basketball IQ and also isn’t afraid to crash the boards to fight for rebounds on the defensive end. It’s not surprising he lists Derrick Rose as one of his favorite players to watch.

Like with all players, there are areas to improve in as well. Exum’s shooting, both the mechanics and selection, will have to develop in the NBA. At less than 200 pounds, he would benefit from bulking up and adding muscle to his frame to be able to still attack the paint against the bigs in the league. Then there is the age and experience factor; he will have a learning curve transitioning to the NBA.

“I have seen him play live a limited number of times, but I have to say that he’s really intriguing. He has a legitimate chance to go No. 1 in this draft. He’s that good. His upside is enormous. I won’t be surprised if he goes No. 1 on draft night. If we land the No. 1 pick, he’s a guy who we’re seriously going to look at.

“There is nothing that suggests that he won’t be a great player. He’s athletic, he can shoot and he can handle the ball. He’s incredibly versatile. He really can play three positions, which is attractive to a lot of teams. I’m excited to watch him develop and see what kind of player he becomes.”

Taking all those factors into consideration, Exum is poised to grab attention when it comes time for the draft. He is a player who could turn heads when the first selections are announced.

Who should be the top pick in the 2014 NBA Draft? Leave your thoughts in the comment section below.