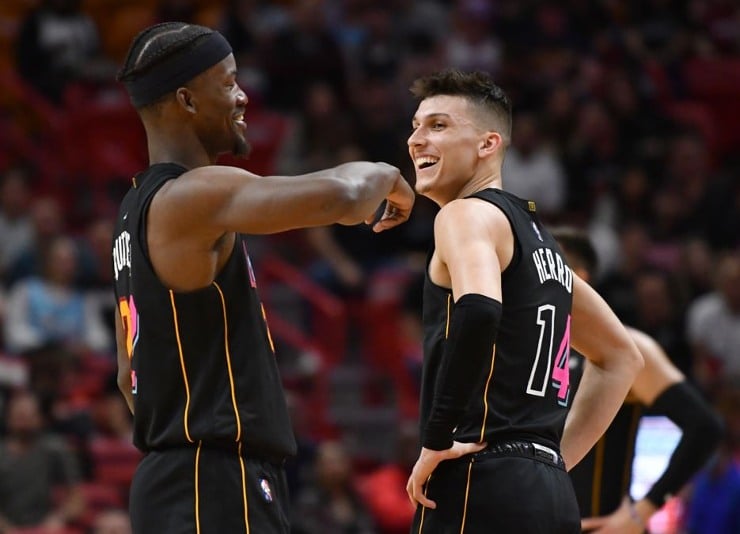 The Miami Heat are plagued by injuries at the moment, with Jimmy Butler (knee), Udonis Haslem (personal), Tyler Herro (ankle), Victor Oladipo (knee), Duncan Robinson (ankle), and Omer Yurtseven (ankle) all out against the Minnesota Timberwolves.

According to the rest of Miami’s injury report, Bam Adebayo (knee), Dewayne Dedmon (foot), and Gabe Vincent (knee) are listed as questionable for Monday night’s interconference matchup as well.

Per a few NBA betting sites, the Heat possess the 12th-best odds to win the championship in 2023. Some sportsbooks are giving the Philadelphia 76ers and Cleveland Cavaliers higher odds.

In addition to the injuries piling on, the Heat are 7-10 and rank 11th overall in the Eastern Conference standings. They’re also on a three-game skid and are 3-7 versus conference opponents.

However, their two most notable losses due to injuries are Butler and Herro. Of course, Butler hasn’t played since last Wednesday, when the Heat lost 112-104 to the Toronto Raptors.

Not to mention, Butler’s posting a career-high true shooting percentage of 61.7%.

Jimmy Butler, Tyler Herro, and Udonis Haslem are among Heat players out against Timberwolves

Meanwhile, Herro hasn’t played since Miami’s 101-99 loss to the Indiana Pacers on Nov. 4. Last season’s Sixth Man of the Year is still recovering from an ankle injury.

In October, Herro signed a four-year, $130 million contract extension with the team. His deal includes a Poison Pill restriction, which will remain in effect until July 1, 2023. Herro will earn $27 million in the 2023-24 season.

Since Herro has appeared in at least 50 regular-season games each year of his NBA career, Heat fans are hoping the Kentucky product will return to the court soon. In the 2021-22 season, the guard averaged a career-high 22.9 points in 66 games.

To save the season, coach Erik Spoelstra needs Butler and Herro back on the floor. Even then, the Heat won only two of their first seven games with two of their top stars healthy.

An in-season trade could be in the works.

At 8 p.m. ET, the Heat take on the Timberwolves at Target Center. This contest will air live on Bally Sports Sun. Miami enters tonight’s road game as a 9-point underdog.