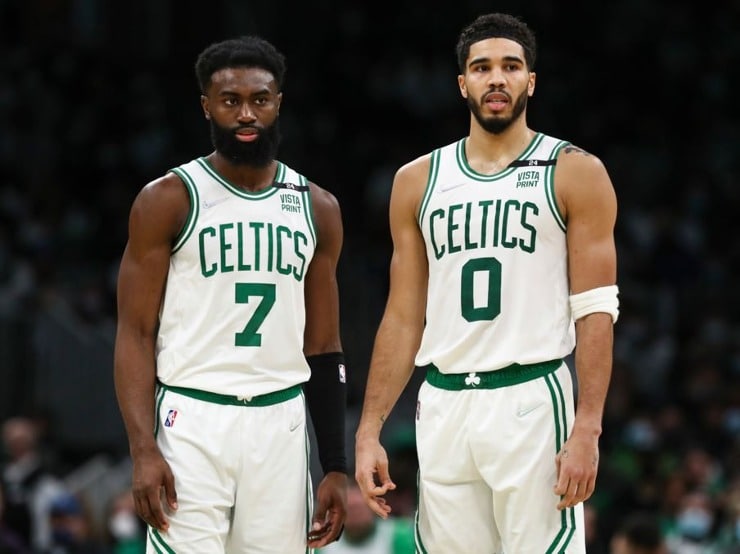 The Boston Celtics sit at the top of the Eastern Conference with a 20-5 record, and the Jayson Tatum-Jaylen Brown duo should receive most of the credit for dominating their competition.

In an interview with Brandon “Scoop B” Robinson of Bally Sports, Brown praised his teammate and the rest of the Celtics. “I don’t subscribe to what’s being said. I try to stay as even-keeled as I possibly can,” Brown told Robinson.

Per a few NBA betting sites, Jaylen Brown and the Celtics are the favorite to win the championship in 2023. Of course, a number of sportsbooks are not counting out the Milwaukee Bucks or Golden State Warriors.

There isn’t a better duo in the NBA today. pic.twitter.com/gql2sNjEBw

In addition to logging a career-best 26.7 points per game, the Celtics wing is averaging a career-high true shooting percentage of 60.7%. And his player efficiency rating is an impressive 20.7.

“Experience, chemistry, camaraderie,” added Jaylen Brown when asked what he believes is the biggest difference between this season and last season. “And we’ve been able to figure a lot of stuff out and we’re still growing. [Last season] we were younger.”

Not enough people are talking about this.

At the quarter point of the 2022-23 season, the Celtics lead the NBA in scoring, averaging 120.6 points per game. Their offensive efficiency rating (1.173) is the best as well.

Besides Jaylen Brown exceeding expectations, Jayson Tatum is having an MVP season. The three-time All-Star is averaging career highs of 30.8 points, 8.3 boards, and 1.0 block per game.

Nonetheless, Boston is not among the teams that rank top 10 in both offense and defense. The C’s are allowing 112.6 points per game, which ranks 13th overall.

Last season, the Celtics allowed the fewest points per game (103.9). Right now, their opponents are shooting 46.9% from the floor. They are not the same defensively. But that’s just a side note. As stated many times, winning is all that matters in the end.