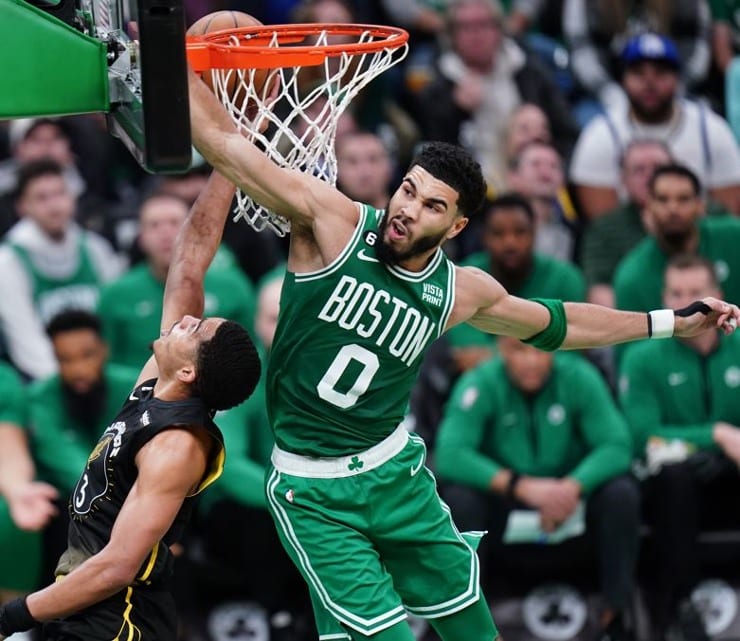 On Thursday night, Boston Celtics forward Jayson Tatum became the 10th player in NBA history to reach 9,000 points before turning 25, in a 121-118 overtime win against the Golden State Warriors.

According to a few NBA betting sites, Jayson Tatum has third-best odds to win MVP in the coming months. Check out which sportsbooks are showing more favorable odds for Nikola Jokic and Luka Doncic.

“The fact of the matter is we lost. We lost the championship,” Jayson Tatum said on whether or not it felt like a revenge game. “No one win — we can’t bring that back. We can’t go back in time and change that. So we didn’t look at this as a rematch of the finals. It’s just one game.”

Tatum is the first Celtics player to record at least 30 points, 15 rebounds, and five assists in a single game since Paul Pierce in 2002. The sixth-year wing is also the fifth player in franchise history to log at least 34 points and 19 boards in a contest, joining Bill Russell, Larry Bird, Dave Cowens, and Robert Parish.

Celtics forward Jayson Tatum is the 10th player in NBA history to reach 9,000 points before turning 25, fifth player in franchise history to record at least 34 points and 19 rebounds in a game

Additionally, this win eliminated Boston’s four-game skid versus Golden State. The Celtics lost their last three games of the 2022 NBA Finals and first regular-season matchup against the Warriors.

Of course, it was the two-time All-NBA member’s best offensive outing versus the Dubs since Boston’s 104-94 loss in Game 5 of the Finals. In the Bay Area, Jayson Tatum logged 27 points, 10 boards, and four assists in 45 minutes played.

Jayson Tatum is just the 5th player in Celtics history to record at least 34 points and 19 rebounds in a game.

On MLK Day, in the Celtics’ 130-118 victory versus the Charlotte Hornets, the 24-year-old scored a season-high 51 points in 41 minutes spent on the court. In addition to grabbing nine boards, Tatum shot 15-of-23 (65.2%) from the floor and knocked down seven 3-pointers.

At least the Celtics finally earned another win against the Warriors.