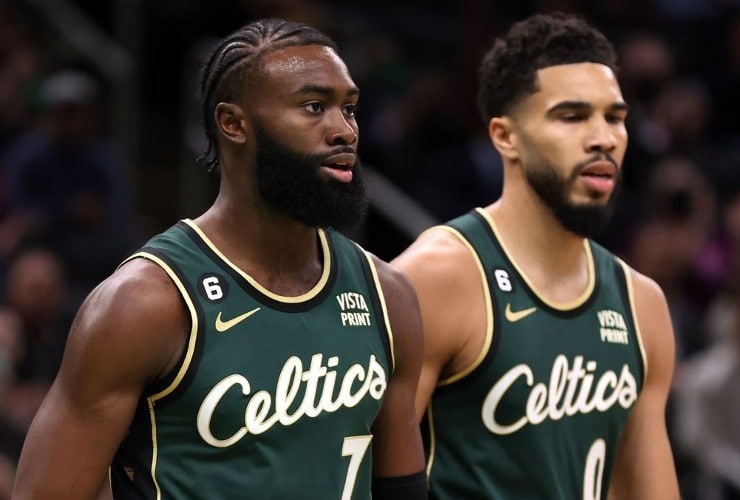 Jayson Tatum and Jaylen Brown of the Boston Celtics are the first pair of teammates in NBA history to post 30 25-point games each before February since Pete Maravich and Lou Hudson in the 1973-74 season.

Tatum has logged 24 30-point games in his sixth season as well. The soon to be four-time All-Star has also registered seven 40-point performances. As for Brown, the 26-year-old has recorded at least 30 points in 14 contests so far this season.

Per a few NBA betting sites, Jayson Tatum has third-best odds to win MVP in the coming months. Some sportsbooks are showing greater odds for Nikola Jokic and Luka Doncic.

Jaylen Brown and Jayson Tatum each have 30 25-point games this season.

They are the first pair of teammates to do that before February since Pete Maravich and Lou Hudson in 1973-74. pic.twitter.com/M8J2BVrp9o

In Boston’s 113-98 loss against the Orlando Magic on Monday night, Jayson Tatum and Jaylen Brown led the Celtics in scoring with 26 points. Tatum contributed six rebounds, seven assists, and one steal while shooting 9-of-19 (47.4%) from the floor and 4-of-10 (40%) beyond the arc.

Brown ended his outing with five boards, three assists, and one steal in 37 minutes of action. Plus, he shot 10-of-22 (45.5%) from the field and knocked down five 3-pointers. However, this loss eliminated Boston’s nine-game win streak. It was the team’s first loss since Jan. 3 versus the Oklahoma City Thunder.

Celtics forwards Jayson Tatum, Jaylen Brown are the first pair of players to each record 30 25-point games since Pete Maravich, Lou Hudson in the 1973-74 season

“I think it says more about Orlando and how they played tonight,” said Celtics interim coach Joe Mazzulla. “They were physical, they had an edge about them, and I thought they played really well.”

Through 45 starts this season, Jayson Tatum is averaging career highs of 31 points and 8.4 boards per game. The two-time All-NBA member is also shooting 46.8% from the floor and 35.2% outside the arc.

Last Monday, in Boston’s 130-118 win over the Charlotte Hornets, the Duke product logged a season-high 51 points in 41 minutes played. Jayson Tatum is the seventh player in NBA history to post five 50-point career games before the age of 25, tying Kobe Bryant.

Meanwhile, Brown recorded a season-high 41 points in a 125-114 victory against the New Orleans Pelicans on Jan. 11. Brown is averaging career highs of 26.9 points and 7.1 rebounds through 43 starts this season. Not to mention, the wing is shooting career bests of 49.2% from the field and 78.7% at the foul line.