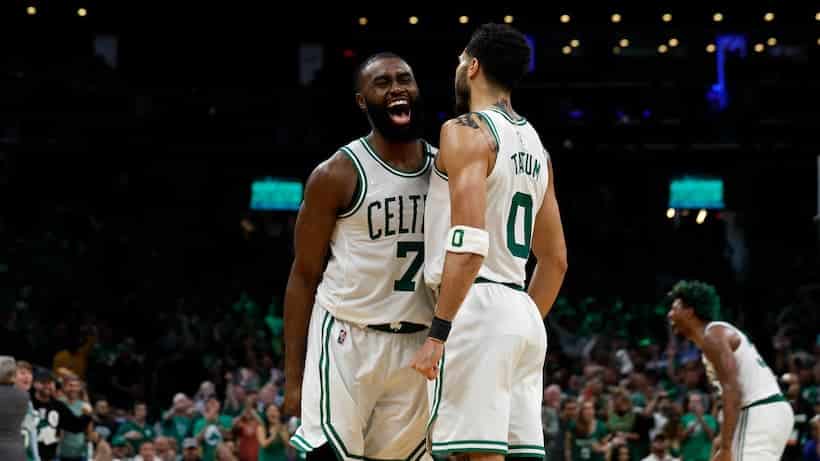 The Boston Celtics hit a rough patch in the beginning of December, but have since then bounced back to first place in the Eastern Conference once again. Boston also have the best record in the NBA at 25-10 and the Celtics are on a three-game win streak. Leading the way for Boston both offensively and defensively are the duo of Jayson Tatum and Jaylen Brown. Tatum was not a fan of the comparison’s that he and his teammate were getting.

Despite a few bumps along the way, the Boston Celtics have looked like the most complete team in the NBA this season. Their suffocating defense leads to easy points on offense and their superstars can score with the best of them. Tatum and Brown account for 49 percent of the points scored by Boston each game. Both are invaluable to the team and will be pivotal parts in their teams success for the rest of the season.

NBA betting sites have Boston as the favorites (+350) to win the Finals this season.

Our one-two punch of Brown and Tatum helped us grab our third consecutive win tonight over the Rockets. pic.twitter.com/mI8joSsX8p

Jayson Tatum not a fan of the MJ and Scottie comparisons

Jaylen Brown lead the Celtics with 39 points last night and Jayson Tatum finished the game with 38. With the duo both having 30 points in a game yet again, they passed the legendary Michael Jordan and Scottie Pippen (18) for most 30-point games by a duo in league history. Tatum did not like the comparisons that the media were drawing from the in regards to himself and Brown being compared to MJ and Scottie and had this to say.

It’s hard to argue against his logic here. Before Boston turned their season around last year, the media were calling for Jaylen Brown to be traded. Now they wouldn’t dare say a thing like that if they want to be taken seriously in their profession. For the 2022-23 season Tatum averages 31/8/4 and his partner Brown averages 27/7/3 per game.