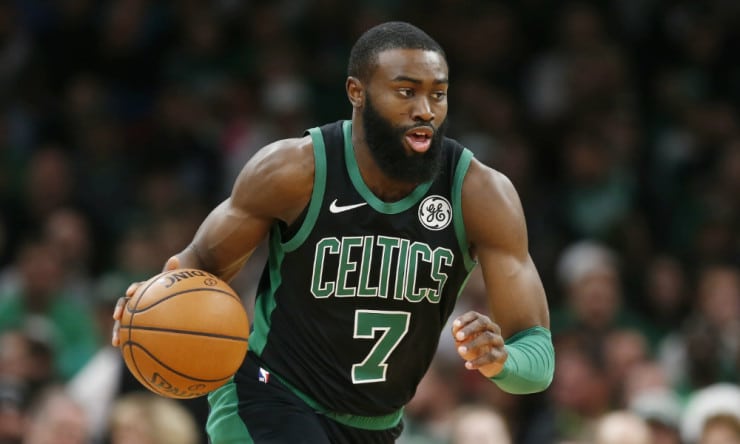 The Boston Celtics have been rolling this season and hold the leagues best record at 21-7. Jayson Tatum and the Celtics are 7-3 in their last ten games, but are on a two-game losing streak for just the second time this season. Their last time losing two games in a row was the stretch of 10/24-10/28. Last night, the Celtics lost 113-93 to the Clippers. Jaylen Brown led all Boston players with 21 points, but Brown had some choice words for the referees after the game.

Boston had an off night shooting the ball vs the Clippers. As a team the Celtics shot 23 percent from behind the arc, going 9-39 as a team. Their two best scorers, Tatum and Brown went a combined 3-14 from deep. Struggles offensively knocked the Celtics out of their rhythm and it affected how Jaylen Brown was playing.

NBA betting sites have the Celtics at (+325) to win the Finals this season.

Jaylen Brown's midrange is the filthiest in the league good lawdy! pic.twitter.com/AlMKhOese8

Jaylen Brown sounds off on refs after Celtics loss to Clippers

Boston will finish a six-game road trip tonight when they face the LA Lakers at 10:00pm, being nationally televised on TNT. After last night’s loss, Jaylen Brown spoke to the media on how he is trying to be more conscious of when it comes to complaining to refs.

“Going into this year, I made an emphasis for me that I’m not about to complain to the refs,”… “I’m not about to change nothing. If I see something that I think can be something for them to look out for, then I’ll let them know. But I don’t do too much complaining to the officials and the referees and I gotta be better on picking and choosing when I can be aggressive.” – Jaylen Brown

Whether blown calls really did effect the game, Boston lost in the areas where they had the control over. They were outrebounded 46-36 by the Clippers. Three of the five starters for Boston finished the game with five points or less, two of them finishing with three points each. The Celtics are averaging (119.3) points per game this season and only (108.3) over the last three games.