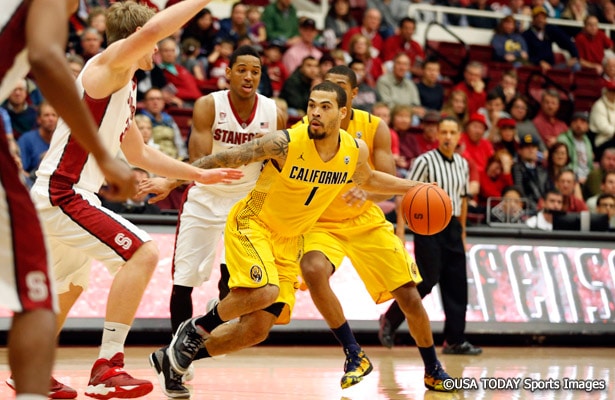 With three games left in the regular season, the California Golden Bears (18-10, 9-6) find themselves firmly on the NCAA Tournament bubble. They could have secured their ticket with a win against Arizona on Wednesday night, but the Wildcats avenged a February 1 loss with a dominant 87-59 victory. Now how the Golden Bears fare against Arizona State, Utah and Colorado to close out the regular season and in the Pac-12 Postseason Tournament will determine whether they are celebrating or sulking on Selection Sunday.

The Golden Bears have only missed the big dance once under head coach Mike Montgomery’s watch over the last five years. In order to keep that streak intact, much of the onus falls on senior point guard Justin Cobbs.

Cobbs has helped guide the Golden Bears to consecutive tourney appearances. They have a 66 percent win percentage since he joined the program in 2011-12 after playing his freshman season at Minnesota. He’s putting up career-best numbers this season, averaging 15.8 points and six assists a contest. There’s still a lot of work to be done, though, as he gets set to play some of the final college games of his career.

“It’s kind of shocking,” Cobbs said to Basketball Insiders of his collegiate career nearly being complete. “I’m just going to try to make these last [three] games the best of it and leave everything on the floor and at the end of the day we’ll assess where we are at. Hopefully that’s a NCAA Tournament bid and a high bid in the Pac-12 tournament.

For Cobbs, this season has already been quite rewarding. He recently moved into fourth place all-time on California’s career assist chart, tying him with future NBA Hall of Famer Jason Kidd. He was also the hero in Cal’s upset of top-ranked Arizona, scoring their last 12 points, including the game winner with .9 seconds left. His play has made him a finalist for the Bob Cousy award and put him firmly on the 2014 NBA Draft radar.

“I think it will translate a lot,” Oklahoma City Thunder point guard Russell Westbrook, Cobbs’ close friend and offseason training partner, said of his game at the NBA level. “I think Justin’s a real physical, strong point guard at Cal and he’s done a great job of helping his team win some games and he’s going continue to get better.”

Despite turning 23 years old in over two weeks, which is on the high end for a draft prospect, Cobbs agrees with Westbrook’s assessment that his best days are ahead of him.

“I think age doesn’t have anything to do with it,” Cobbs said. “I’m never satisfied and I always want to get better. I’m always looking for ways to get better, looking at film and always in the gym getting better. If you have work ethic, you’re strong-minded and you’re always willing to take in knowledge from other great players and other great coaches, I think the sky is the limit. There’s never a reason why you can’t get better. You have guys like LeBron [James]; he’s 29 and coming back every season and getting better and better.”

There’s a lot to like about Cobbs when projecting his ability to play at the next level, most notably his size at 6’4. He makes good use of his size and length on the defensive end especially and has become a well-rounded player offensively who is a serious threat with the ball in his hands.

The one area that he really wants to improve in is his effectiveness off the ball.

“I think one [area I need to improve] is just my shooting,” Cobbs said. “I think I worked on a lot of shooting, my whole life I’ve been bigger than a lot of guards and I’ve been faster than a lot of guards. I would say my strength is getting to the basket. This year, I’ve been conscious on staying in the gym and get a lot of shots and trying to stay confident and taking these shots and knocking them down. The one thing I should get better at is my three-point shooting and extending my range.

“My dad always told me if you don’t work hard there’s another player around the country that’s doing it. My whole life I’ve been a gym rat and I’ve been a guy that’s always loved to play basketball and stay in the gym and get better. I think my dad instilled that in me and then my high school coach, Coach Mitchell. If you’re in the gym and doing things, guys will follow you. I’m a guy that people will follow by more action, I’m not really a rah-rah guy that talks to guys and gets them going, I’m more of a lead by action. I think those two guys helped me a lot just to understand it’s not just going to be pure talent that’s going to get you across the board. It’s going to be your work ethic and then with that that’s how I’ve gotten better and been able to separate myself from these other players in the country.”

Because of what he’s already accomplished, the next step in Cobbs’ basketball journey has already been determined. Regardless of when the season comes to an end, he will embark on the pre-draft process afterward. There will be opportunities for him to increase his stock, like the Portsmouth Invitational, combine and private workouts. However, Cobbs knows it’s in the coming weeks where he stands to further increase his value the most.

“I think I am underrated, but that’s what the NCAA Tournament is for and hopefully we keep getting better and we can make it,” Cobbs said.

Cobbs and the Golden Bears will be back in action on Saturday at Arizona State.