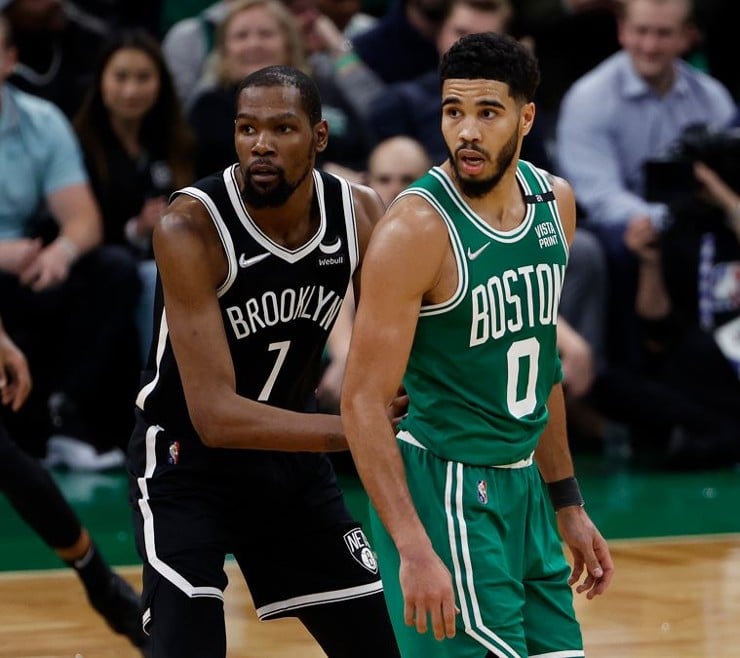 Sportsbooks released NBA odds after news stories surfaced that Durant is reportedly now interested in playing for the Boston Celtics.

Will Kevin Durant get traded before the start of the 2022-23 NBA regular season?

According to BetOnline oddsmakers, Durant has unfavorable odds of getting traded before the start of the 2022-23 regular season. The two-time Finals MVP possesses -200 odds of staying put in Brooklyn.

On the other hand, the 12-time All-Star has +200 odds of playing for a new team before the start of the regular season. Nonetheless, trade negotiations are stalled with the Miami Heat. And Durant has a slim chance of ending up on the Phoenix Suns. Therefore, he will likely remain in the Eastern Conference.

When will KD get traded by the Nets?

Moreover, if a gambler is willing to place a bet on Durant getting traded by the Nets, the question now is when? An in-season trade is probable. One of the top news stories in the NBA last season pertained to whether or not the Philadelphia 76ers would trade Ben Simmons.

Additionally, for Kevin Durant, the 14-year veteran has the highest odds (+175) of getting traded between Sept. 1 and the start of the 2022 regular season.

Meanwhile, sportsbooks are not expecting the Nets to move Durant after the start of the 2022 regular season and before New Year’s Day in 2023.

If Durantula gets traded by Brooklyn next season, it will either happen right before the 2023 trade deadline or before the season opener. Needless to say, the history of NBA trades proves this theory correct.

Equally important, reported by Ian Begley of SNY.TV, the Celtics are one of Durant’s most preferred teams. “Durant sees Boston as a desirable landing, per people familiar with the matter,” explains Begley.

“Durant also would like to play with Boston’s Marcus Smart if he is traded to the Celtics, per people familiar with the matter…”

“It is unknown if Boston and Brooklyn have made progress on a deal,” continued Begley. “SNY reported last week that there had been pessimism about a Durant trade being completed in the near future.”

Taking everything into account, Begley’s report seems accurate. Though, fans have to question the reporter’s ‘people familiar with the matter’ source. That could mean anything.

Per BetOnline oddsmakers, if Durant gets traded, the Celtics have the most favorable odds (-140) of landing the Slim Reaper.

During the 2016 offseason, there was also a time when then New England Patriots quarterback Tom Brady advocated for Durant to sign with the Celtics. Not to mention, Kevin Garnett tried convincing him to play there as well. Other news rumors related to Kevin Durant odds are on the main page.