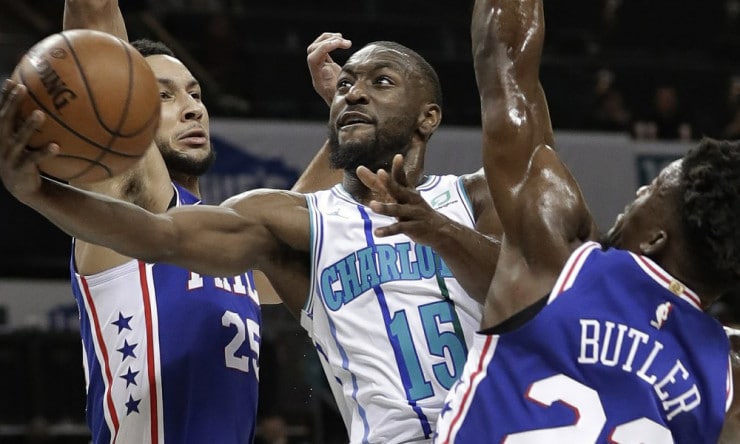 If you asked the casual hoops fan to list the best players in the game, names like LeBron, Steph, Anthony Davis, and Kyrie Irving might be among the first to be uttered. But there is a force in Charlotte whose name should be whispered whenever the elites of the game are mentioned. Kemba Walker has been a destroyer of late, as evidenced by his most recent outings where he shredded the 76ers for 60 points in an overtime loss and then followed up that gem with 43 in a winning effort over the Celtics on Monday night.

Oddsmakers at some of the most trusted and best online sportsbooks were dealing Boston as 3 ½ point favorites in that game but clearly, they had the wrong favorite and didn’t prepare for another stellar performance from the two-time NBA All-Star. Walker has now eclipsed Steph Curry as the NBA’s scoring leader, averaging 29.6 points per game, and has contributed mightily to a Hornets season record that wouldn’t be sniffing .500 without him.

Celtics forward Gordon Hayward had this to say after Monday’s game, “He’s been unbelievable, especially when your whole game plan is to stop him and he is still going off and doing what he does. He’s an unbelievable player.”

The seven-year veteran has come into his own over the past three seasons, averaging 23.2, 22.1, and currently 29.6 points per game. Walker and the Hornets will close out the week with a game at home against the Pacers on Wednesday and then hit the highway for a date with the Thunder on Friday and then an early evening affair against the Hawks in Atlanta.

The Celtics are completely out of sync and lost their following two games to Utah and Charlotte after a huge win over Eastern Conference big shot Toronto. Kyrie Irving, Jayson Tatum, Jaylen Brown, and the entire lot appear to be disjointed but there is one name that keeps popping up as the one many perceive to be the culprit – Gordon Hayward.

The former member of the Utah Jazz, who was wooed to Boston as a prized free agent before last season, suffered a gruesome broken leg in the opening game and has returned this season to much fanfare. However, the euphoria of a healthy Celtics roster has dissipated into utter disappointment and head coach Brad Stevens even pulled him from the starting unit to open their game against the Hornets with Aron Baynes getting the start. It made little difference as Baynes went 1-for-4 from the field and Haywood contributed another clunker on 1-of-6 shooting.

The Celtics have an ideal opportunity to get back on track with games against the Knicks at home before they travel to Atlanta and Dallas to close out the week. If the Shamrocks continue to struggle against those teams then the reality that this team simply isn’t as good as it looks on paper will begin to set in, and for the first time since he’s been coaching the Celtics, Brad Stevens could be nearing the hot seat. But before panic ensues in Celtics Nation, the head coach had this to say about his charges, “We have to build a tougher team mindset than we have. We just don’t have that mindset yet that we need.”

Many believe that it is only a matter of time before the C’s get well but in the interim, they are now slipping down the Eastern Conference standings where they sit tied with Orlando and Charlotte for sixth through eighth place. It’s basement playoff real estate that has been unfamiliar to Boston over the past few seasons and if change is gonna come, it better start soon.