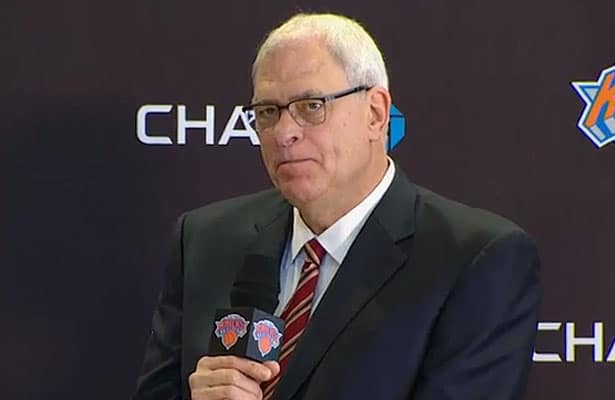 The New York Knicks officially named Phil Jackson, who has 13 NBA championship rings, as president of the team and control of the front office on Tuesday.

The news first broke more than a week ago when it was reported that the Knicks wanted Jackson to help bring the franchise back to its championship days and would pay him $12 million per year. Jackson said his contract is for five years.

“Today is an historic day for the Knicks as we announce that Phil Jackson has been named our team preesident. One of the most admired and successful basketball minds in the league,” Dolan said.

Jackson will be in charge of the Knicks’ basketball operations. General manager Steve Mills will continue to have a significant role in the team’s front office.

Jackson, who said he will move to New York to run the team, won a record 11 NBA championships as coach of the Chicago Bulls and Los Angeles Lakers in the 1990s and 2000s.

While the Lakers had significant interest in bringing Jackson back in some capacity, formal talks never materialized. Reportedly, the Lakers did not contact Jackson’s representatives and the team was not prepared to offer him a role similar to the one the Knicks are giving him.

One of Jackson’s biggest challenges will be making a decision on pending free agent Carmelo Anthony. The star forward plans to opt out of the final year of his contract this summer. Anthony said he would like to meet with Jackson to talk about the team’s future plans before deciding whether to stay or leave.

Jackson is also likely to hire a new coach. It has been widely speculated that Mike Woodson will be dismissed at the end of the season. Steve Kerr, Brian Shaw and Kurt Rambis are considered possible candidates.

Jackson’s role will be an integral one for the Knicks, unlike when he acted as a consultant for the Detroit Pistons. He will make all basketball decisions for the Knicks, although Dolan is expected to have a say.

Michael Jordan believes his former coach can succeed in the front office with the Knicks.

Despite Jackson having never been an executive before, Jordan says his old Bulls coach’s methods and strengths can work even from a front-office position.

“Phil can do some good things with them because he’s gifted,” Jordan told ESPN’s Stephen A. Smith on Monday. “Phil is fantastic at managing egos and personalities, getting everyone on the same page and maxing out whatever potential is there for what should be the common and ultimate goal.

“Just because he’s never been an executive before doesn’t mean he can’t do that. He’s wanted to do it for a while now, and I know he can do it … so long as he has the necessary pieces in place.”

Jordan, the chairman of the Charlotte Bobcats, said Jackson will learn the landscape of the NBA as an executive quickly.

“Phil is great,” Jordan said. “He’s very smart. He’ll figure out pretty quickly what needs to get done, and he’ll have plenty of guys in the league willing to help him, myself included.

“The only problem is none of us will be willing to give up great players or draft picks to do that. That’s the part of the job all of us have found pretty difficult, me included. But I wish him luck. I believe in him, and I’m confident anything he does will work eventually.”

Anthony said he will change his game if Jackson believes it will give the Knicks a better chance to win a championship.

“I’m not sold or stuck on my play. What I’ve been able to do these past 10, 11 years has gotten me at where I am right now. If Phil wants to come in and change that this late in my career, if it’s going to help me win a championship, I’m with it.”