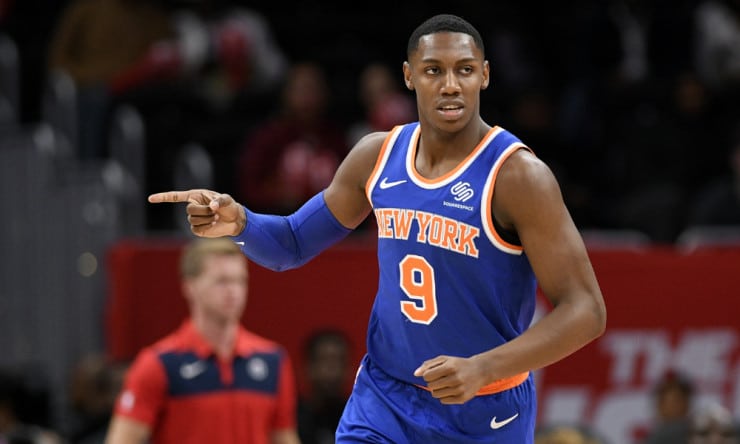 The New York Knicks are 5-5 in their last ten games and are on a small three-game win streak. Back on 12/27, the New York Knicks were playing the Dallas Mavericks and Luka Doncic tried stealing the ball from RJ Barrett. In the process, Donic bumped into Barrett and dislocated his finger. New York has been without him since the injury, but he did give an important update to the media about his finger.

On top of the dislocated finger, it cut through his hand and it started bleeding. Without Barrett, the Knicks have gone 3-2 and that’s in large part because of Julius Randle and Jalen Brunson. Right behind that duo, Barrett (19.7) is the next highest scorer per game on the team. New York Sports Betting sites have the Knicks at (+12500) to win the Finals this season.

Barrett knows that this was a complete accident by Doncic and that nothing was intentional. He explained how it was his own hand that caused the laceration in his finger. Fred Katz of The Athletic had this to report after speaking to Barrett earlier today.

“Spoke with RJ Barrett this morning in Toronto. RJ said Luka’s hand isn’t what caused his laceration. RJ’s left hand knocked into his right one, which dislocated a finger in his right hand. When it dislocated, the bone cut through his hand. He got six stitches, which are still in.” – Fred Katz

The 22 year old says the only thing holding him back at this point is the stitches and he’s been working out and shooting in the meantime. Barrett said he is going to see a doctor “later this week” and said when the stitches are out that he will not need a lot of time in the ramp-up process. After their game tonight, the Knicks have a game on this coming Monday and Wednesday, leaving one of those two games to possibly have Barrett return to the lineup.