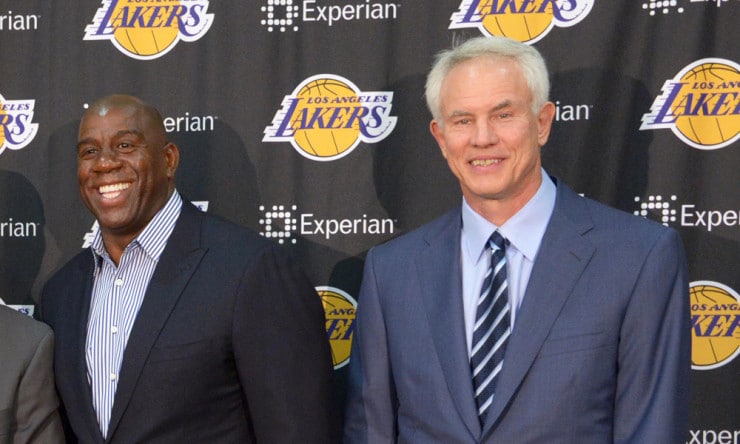 Clearly, last summer’s tactic of attempting to lure a big name free agent (or two) simply didn’t pan-out for the Los Angeles Lakers. In fact, if we’re being honest, the Lakers have endured a few summers of disappointing results due to myriad things. From the ‘Dikembe finger’ of former-commissioner David Stern, to an unprecedented amount of injuries to a significant percentage of the roster over the past few seasons, to the loss of their own free agents seeking greener pastures elsewhere, their front office is certainly due for a reversal of their recent misfortunes.

This summer, the Lakers are in the rare position of having multiple options and routes that could lead them back to a more successful and familiar path. While the debate about whether Jahlil Okafor or D’Angelo Russell would be the best choice with the No. 2 pick in Thursday’s draft rages on, it comes as no surprise that preliminary discussions between the Lakers and Kings regarding a DeMarcus Cousins deal have apparently taken place.

According to Marc Stein of ESPN, the Lakers have been actively pursuing trade scenarios for the 24-year-old former fifth-overall pick over the past few weeks, and have at least engaged in “exploratory dialogue” about a three-team deal that would also include the Orlando Magic. All of this comes amidst seemingly conflicting factions in Sacramento as a wide variety of sources report George Karl’s desire for the franchise to move Cousins while Kings’ ownership and VP of Basketball Operations Vlade Divac have united in making it clear they do not intend to move him.

Our Cody Taylor broke down the potential and realities of the hypothetical three-team deal, but even if that or a similar deal for established talent were not to materialize, the Lakers know the likely choice between Okafor and Russell still leaves them in a good position to continue this rebuilding effort.

What must feel nice to this front office and, quite frankly, this fan base alike is the fact the the Lakers finally appear to have some viable and even attainable options before them. For a front office that was accused of “not having a plan” by a former free agent, Mitch Kupchak and Jim Buss certainly appear to have their fingers at the pulse of this year’s draft as well as the upcoming free agency process. It’ll be interesting to see what they’ve got in store for this summer.