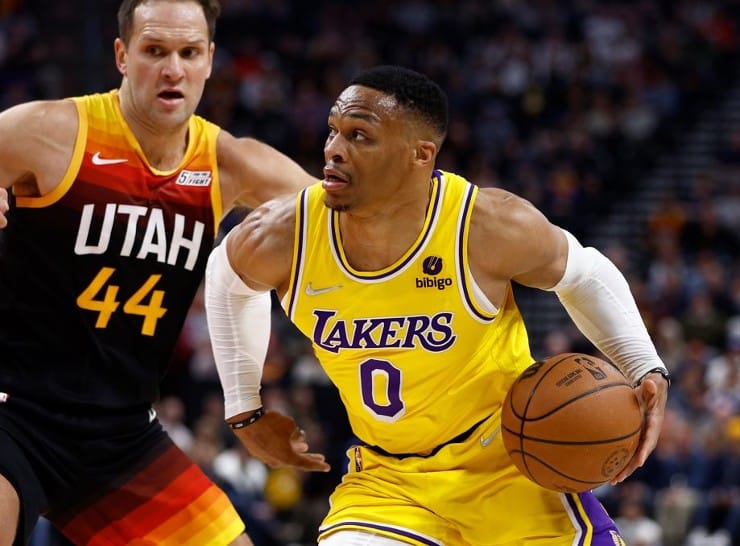 The Los Angeles Lakers key decision makers have seriously considered a blockbuster trade including Russell Westbrook, according to a report.

Westbrook, 33, is a former MVP and nine-time NBA All-Star alongside nine All-NBA honors, but has been a shadow of the player he once was since teaming up with LeBron James and Anthony Davis in LA.

The Lakers key decision makers have ‘seriously considered’ trading Russell Westbrook and unprotected first-round picks in 2027 and 2029 to the Pacers for Myles Turner and Buddy Hield, per @ShamsCharania

According to Shams Charania of The Athletic, the Lakers have considered trading their point guard plus unprotected first-round picks to the Indiana Pacers for big man Myles Turner and sharpshooter Buddy Hield.

Westbrook is +15000 to win the MVP award for a second time in NBA betting, however those odds may slash if a trade occurs before the start of the regular season on October 18.

The former Oklahoma City Thunder star averaged 18.5 points, 7.4 rebounds, and 7.1 assists per game in 78 regular season appearances last year for the Lakers, missing the playoffs entirely which lead to the firing of head coach Frank Vogel.

Under new guidance from former Milwaukee Bucks assistant Darvin Ham, Westbrook is likely to play a different role in a lineup alongside Kendrick Nunn in the backcourt behind James, Davis, and Damian Jones.

The 17-time NBA champions begin their quest for an 18th ring in just over two weeks, paying a visit to the reigning champions Golden State Warriors at Oracle Arena.