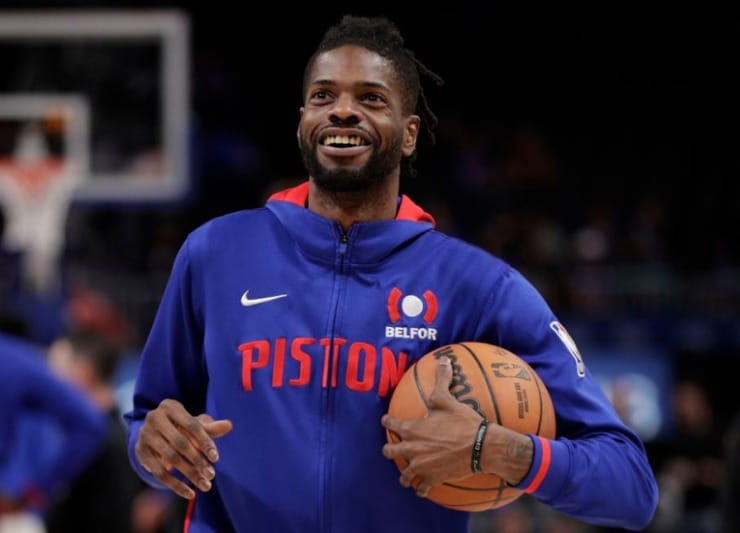 The Miami Heat, Portland Trail Blazers, Dallas Mavericks, and Sacramento King are interested in trading for Detroit Pistons center Nerlens Noel, according to sources. Noel is ready to move on from the Motor City.

“Both sides have agreed that a deal is best for both parties, and Detroit has already had talks with rival teams about Noel,” reported James L. Edwards of The Athletic.

Per multiple NBA betting sites, the Heat have the 14th-best odds to win the championship in 2023. However, some sportsbooks are giving the Mavericks top-10 odds in the Western Conference.

The Trail Blazers, Kings, Heat and Mavericks have been the teams most engaged when it comes to acquiring the veteran big man.

“Portland, Sacramento, Miami and Dallas have been the teams most engaged when it comes to acquiring the 28-year-old,” added Edwards.

Through six games off the bench with the Pistons, the center is averaging career-low numbers. Noel is logging 1.8 points and 3.2 rebounds per game this season. Plus, he’s shooting 30.8% from the floor.

Noel was selected sixth overall by the Charlotte Hornets in the 2013 NBA Draft. He was then traded to the Philadelphia 76ers, along with a 2014 first-round draft pick, for Jrue Holiday and Pierre Jackson.

Noel has never played a full season in his entire nine-year career. The Kentucky product has dealt with a number of injuries over the course of his NBA playing career.

During his freshman 2012-13 season at Kentucky, the center tore his left ACL. This led to Noel missing his entire NBA rookie season with the Sixers.

He also missed the 2016 Rising Stars Challenge because of tendinitis in his right knee. Later the same year, Noel underwent surgery to repair an inflamed plica above his left knee, which caused him to miss the first 23 games of the 2016-17 season.

The Mavs touched base with the Pistons regarding a trade, Nerlens Noel was a name that came up in the talks, per @IanBegley pic.twitter.com/q5Nc91ymmA

Although Noel signed a one-year, $4.19 million qualifying offer deal with the Mavs, the center went on to appear in just 30 games during the 2017-18 season. While logging 15.7 minutes per game, the former Sixer averaged 4.4 points, 5.6 rebounds, and 1.0 steal per contest.

Out of the four interested teams, Noel might prefer either the Mavericks or Kings. Since Sacramento is aiming to end its 16-year playoff drought this season, he could help add depth to the contender’s young roster.

As for the Mavericks, they appeared in the Western Conference Finals last season. Among the interested teams, Dallas has the best odds to win the championship. Noel would compete with Dwight Powell and JaVale McGee for starting center.