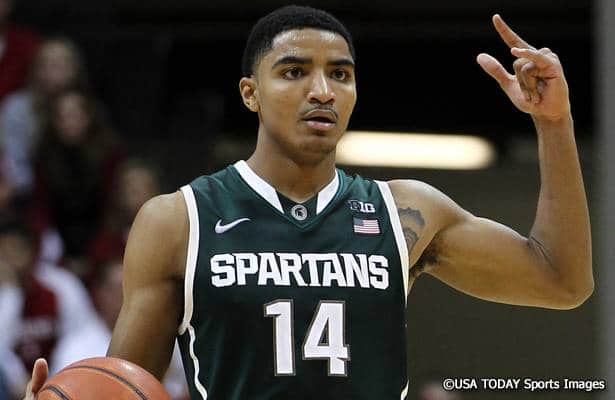 Harris made a career-best six 3-pointers — his previous best was five last season against the Boilermakers — and he finished with 25 points on a night when the Spartans made a season-high 17 shots from beyond the arc.

Michigan State (22-5, 11-3 Big Ten) was coming off a shocking 60-51 loss to Nebraska on Sunday. In that game, the Spartans made only five of 24 attempts from beyond the arc. They bounced back Thursday to take a half-game lead on No. 20 Michigan for first place in the conference heading into a Sunday showdown at Ann Arbor.

The Spartans were dialed in at Purdue’s Mackey Arena, finishing 17 of 32 from 3-point range. Center Adreian Payne added 23 for Michigan State, which trailed only once, 5-3 early in the game.

Harris, Payne and guard Travis Trice combined to make 14 of 23 attempts from beyond the arc.

Purdue (15-11, 5-8 Big Ten) got a career-best 19 points from freshman guard Kendall Stephens and 17 from sophomore point guard Ronnie Johnson. Sophomore guard Rapheal Davis came off the bench to score 13 points for the Boilermakers.

Purdue shot a respectable 49 percent from the field (24 of 49), but the Spartans hit a blistering 57.7 percent (30 of 52). Michigan State won in Mackey Arena for the third consecutive season.

Michigan State sank 10 of its first 14 field-goal attempts, including nine of 12 from 3-point range, on its way to a 49-38 halftime lead. The Spartans finished the half 14 of 22 from the floor, including 13 of 19 from long distance.

At one point in the first half, the Spartans had 12 field goals, 11 of them from beyond the arc.

Payne set the tone by making a trey on the game’s first possession, and the Spartans added to their perimeter assault with six players making at least one 3-pointer during the first 20 minutes.

Purdue, which was coming off an 82-64 victory on Saturday against rival Indiana in Mackey Arena, led 5-3 after a 3-pointer by guard Sterling Carter. Michigan State countered quickly with a 10-2 run, fueled by 3-pointers from Payne and Harris for a 13-7 advantage.

Harris finished the half with 19 points in 19 minutes. Payne added 13 first-half points.

While Stephens kept the Boilermakers within striking distance with 15 first-half points, Michigan State was relentless from 3-point range.

The Boilermakers began the game with 7-footer A.J. Hammons and 6-10 Jay Simpson in the starting lineup together for the first time in their careers, but Hammons got his second foul with 11:08 left in the half, and Simpson was whistled for his second with 9:50 to go before the break.

The Boilermakers avoided an even worse first-half fate by making 14 of 20 free throws before intermission when seven Spartans were called for two fouls each. Michigan State was called for 16 fouls in all before halftime.

NOTES: The Spartans’ previous best 3-point total this season was 14 in a November 22, 2013 victory against Virginia Tech. … Before playing at Purdue, Michigan State lost four of seven, beginning with a Jan. 25 defeat against Michigan in the Breslin Center. … Former Purdue All-America F Glenn Robinson, the 1994 Wooden Award winner, was honored during a halftime ceremony. Fans received a Robinson bobblehead doll when entering Mackey Arena. … The teams combined to make 17 of 27 shots from 3-point range during the first half.