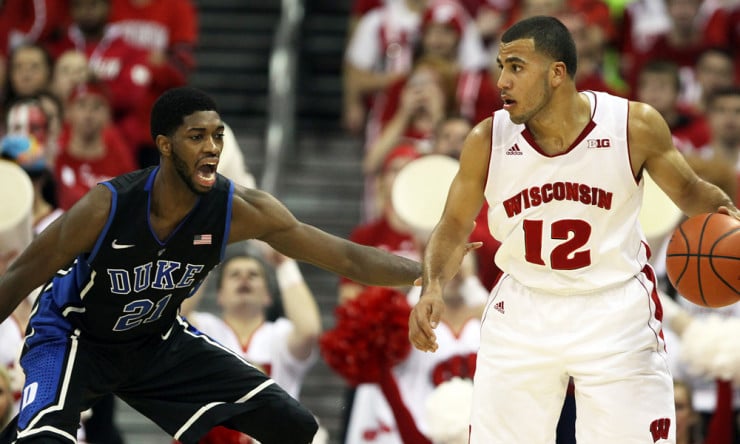 Perhaps they were fazed by the moment, or over confident from their November win against Michigan State. Whatever it was that had the Blue Devils out of sync to start the Final Four against the Spartans, it didn’t take long for them to shake it off. In fact, it only took five minutes, as after that point it was clear that Michigan State’s surprising run had reached its expiration date, as the Blue Devils ran away from them, 81-61, to advance to the national championship game. Justise Winslow, who has had a heck of a tournament, led the way once again with 19 points, nine rebounds, two assists and two steals. Jahlil Okafor was a force as well, posting 18 points and six rebounds, while Quinn Cook helped pace the Blue Devils with 17 points of his own. The Blue Devils were simply the aggressors, getting to the free throw line 37 times, where they connected on 27, compared to just 16 times for Michigan State. They were also a +6 in the turnover department. As the Blue Devils celebrated, a big part of them likely thought they’d end up facing Kentucky for the national championship. However, instead they’re going to be taking on a team that they’ve already beaten this season: the Wisconsin Badgers. That was back in December and the Badgers are a much more confident team than they were then, especially coming off of their huge victory against Kentucky. The Blue Devils topped them by 10 then in a game where the point guards, Tyus Jones and Traevon Jackson, shined. It’d be foolish to take too much away from that first contest, but it is safe to say that if Duke can contain Sam Dekker to only five points and four rebounds as they did in the first contest, the Blue Devils will be taking home their fifth national championship.

Prior to the start of the tournament, when Kentucky’s invincibility was perceived to be at its highest, the Wisconsin Badgers were one of the few teams that the general public gave even the slightest chance at upsetting them. The veteran-laden Badgers had been dreaming of a rematch against Kentucky ever since they were eliminated by them in last year’s Final Four. Kentucky, with so much changeover since then, didn’t have the same kind of animosity or vengeance on their mind. Their sole focus was remaining perfect, and with 4:45 remaining they found themselves up by four and in control of the game. The Badgers refused to be denied, though. Sam Dekker hit a clutch step-back three pointer to break a 60-all tie and the Badgers made seven free throws in the final 25 seconds to give the Wildcats their first loss of the season, 71-64. While Dekker hit the biggest shot of the game, it was Frank Kaminksy who really gave the Wildcats fits throughout the entire contest. Going up against a much bigger, stronger, longer and more athletic Wildcats frontline than the one that locked him down in last year’s Final Four, Kaminsky showed how much better he’s gotten since that time, going off for a game-high 20 points and 11 rebounds while adding two assists and two blocks as well. His aggressiveness helped set the tone for the rest of the Badgers, who went to the line 22 times – 12 more than Kentucky. As big of a win as that was for the Badgers, all it did was clinch a spot in the national championship game – it didn’t win it for them. Awaiting them is a Duke team that knows they can beat them and brings nearly as much star power as the Wildcats with three star freshman and an upperclassman point guard who is playing the best basketball of his career. Kaminsky needs to aim for the 20-point, 10-rebound plateau again and Dekker has to be able to have success against the defense of Justise Winslow in order for the Badgers to win their first national championship since 1941. Both teams also benefited greatly from a big advantage in free throw attempts in the Final Four, so look for the way the game is officiated and which team adapts properly first to be a major determining factor on Monday night.