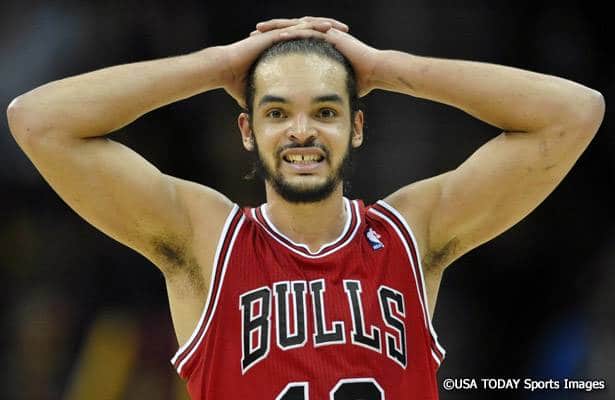 What would have been your prediction for the Chicago Bulls heading into March if you were told former MVP Derrick Rose had played in only 10 games and former All-Star forward Luol Deng was dealt away prior to the trade deadline?

Surely, unless you’re an extremely optimistic hardcore fan, the prediction would have been one dreaming of the upcoming draft lottery and not that of a club in the upper echelon of the Eastern Conference standings.

However, the Bulls have continued to defy the odds without Rose and Deng in the rotation, managing to hold off those itching to write the team’s eulogy in the process.

Despite the adjustment period, Chicago  (31-26) is currently fourth in the Eastern Conference standings and eyeing home court advantage in the first round of the playoffs. While this may serve as a meaningful accomplishment for some, All-Star center Joakim Noah says the Bulls have even bigger goals to achieve as the season heads down the stretch.  Chicago is just one game behind the third place Toronto Raptors.

“Four spot? We want that three [spot],” Noah told NBA TV after Wednesday’s victory over the Golden State Warriors. “We want that three and we’re going to keep fighting. We feel like we can beat anybody when we’re playing our game and that’s a good feeling. We’re competing hard every night and I know the people in the city of Chicago are proud. That’s what it’s all about, going out there and giving yourself a shot.

“Our team has gone through a lot the last couple of years. Losing D-Rose was a tough blow to our team because we know when he’s out there we have a legit shot to win the [championship]. We really believe that. So our mentally is to get better every day and wait for our star to come back and to get that ring one day.”

The Bulls have won seven out of their last eight contests. While victories over Los Angeles (Lakers), Atlanta (2), Brooklyn, Toronto, Denver and Golden State doesn’t necessarily qualify as a murderer’s row, Chicago has pulled out victories in all different varieties  during this span – showing their growth as a unit. The club’s only loss during this span was a 14 point setback to the two-time defending champion Miami HEAT on the road.

Noah believes the team, known for its tenacious defensive style, has evolved and learned to win games outside of its bread and butter as the season has progressed.

“Every game is different,” Noah said. “Sometimes you’re going to win with your defense. Sometimes your shots aren’t going to go down. You just got to find a way to win. We’re getting more and more comfortable offensively.”

Noah is currently averaging a career-high 12.1 points per game. The seventh year center is also posting a career year on the boards and in assists, averaging 11.5 and 4.6 respectively per contest.

But Noah’s performance isn’t the only reason the Bulls have managed to maintain relevant in the East.

The signing of veteran point guard D.J. Augustin last December has paid immediate dividends. After struggling mightily during stints in Indiana and Toronto, Augustin has seemingly regained the form which made him a starter early in his career with the Charlotte Bobcats.

Chicago will face Dallas, New York, Brooklyn and Detroit before embarking on a six game home stand starting on March 7 which includes Houston, Memphis, Miami, Oklahoma City and San Antonio on the menu.

Veteran forward Antawn Jamison signed a one-year deal with the Los Angeles Clippers prior to the season to aid in their title push. However, Jamison struggled adjusting to his role in limited minutes and was subsequently traded at the deadline to the Atlanta Hawks in exchange for the draft rights to 2005 second round pick Cenk Akyol.

The Hawks have been dealing with a plethora of frontcourt depth issues, due to injuries, throughout the season – so the deal on the surface made sense. However, Atlanta quickly requested waivers on the veteran which sent him back into the realm of free agency.

According to a source, both parties agreed early in the process there wasn’t a mutual fit.

Jamison wanted the flexibility of exploring his options of latching on with a title contender heading into the season’s stretch run, while the Hawks have been seriously contemplating adding forward Mike Muscala into the fold.

Muscala was the team’s 2013 second round pick and had been playing professionally in Spain. His signing is expected to be formalized on Thursday.

According to previous reports, Jamison has drawn exploratory interest from Chicago and San Antonio with nothing imminent on the horizon at this time.

Former All-Star forward Danny Granger was dealt by the Indiana Pacers at the trade deadline to Philadelphia in exchange for forwards Evan Turner and Lavoy Allen and a second round pick. The Pacers, the only team Granger ever played for, didn’t want to risk losing the veteran in free agency this summer for nothing in return. In Turner, the team got younger and also picked up an insurance policy in the event free agent to be Lance Stephenson receives a lucrative deal this summer.

The Sixers and Granger completed a buyout on Wednesday and the forward was subsequently waived.

According to numerous reports, the Los Angeles Clippers and San Antonio Spurs are the primary suitors for Granger’s services for the rest of the season.

However, according to an ESPN report,  the Clippers have edged ahead of the Spurs in the race to secure his signature on the dotted line.

The Clippers have been searching for additional depth amidst a rash of injuries in the lineup. Granger is rumored to be enamored with the prospect of playing time and chance at a title the Clippers will provide this season.

Granger, who played just five games last season due to knee trouble, was averaging 8.3 points and 3.6 rebounds for the Pacers at the time of the trade.