Orlando Magic power forward Channing Frye discusses the team’s three-game winning streak, their increased confidence, his move to the starting lineup, not getting too high or too low and more in this interview.

During Providence’s upset victory over 11th-ranked Arizona in the Wooden Legacy Classic over the weekend, point guard Kris Dunn showed why he’s arguably the best player in the nation and a top prospect in the 2016 NBA Draft.

In the final four and a half minutes against the Wildcats, Dunn was responsible for every point of a 15-7 Friars run. Then, with about 30 seconds left in the game, Dunn put the Friars ahead with a turnaround, fade-away jumper that looked like an old-school Kobe Bryant highlight. Finally, he delivered the dagger with 12 seconds left, getting out in transition and throwing down a one-handed dunk to put the game out of reach. Dunn put Providence on his back, finishing with 18 points on 7-9 shooting from the field as well as eight assists and two steals (despite playing just 21 minutes due to early foul trouble). 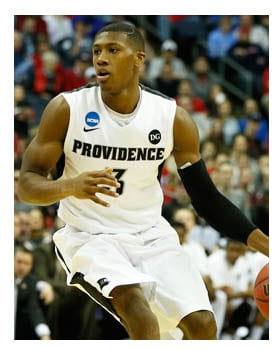 By defeating Arizona, Providence advanced to face 3rd-ranked Michigan State in the Wooden Legacy Classic title game on Sunday. The Spartans won, handing Providence their first loss of the season, but the Friars kept it close until the end. Dunn once again played very well, finishing with 21 points, seven assists and five rebounds – and winning the much anticipated individual matchup against fellow Player of the Year candidate Denzel Valentine.

These impressive outings from Dunn are almost expected at this point. This season, Dunn is averaging 19 points, 6.7 assists, 6.2 rebounds, 3.7 steals and one block. He’s having a career-year, even though he’s actually averaging two fewer minutes per game than he did last season.

Dunn has had multiple dominant performances so far this year. For example, he had a remarkable 32 points, six rebounds, five assists, eight steals and two blocks against Harvard. Last week against NJIT, he had 22 points, 10 rebounds, nine assists, seven steals and one block. Dunn has shown that he’s capable of filling the stat sheet every single night, which is why his season averages are so ridiculous.

While his game is becoming much more well-rounded, defense remains Dunn’s biggest strength. He’s one of the better perimeter defenders in the country, as he ranks second among all Division-I players in both steal percentage and steals per game. Dunn’s 6’4 frame and 6’9 wingspan cause a lot of problems for opposing guards. He forces a lot of turnovers by pestering opponents and disrupting passing lanes. Dunn should be able to translate his defensive success to the next level, although he’ll have to adjust to the tougher completion and more complex NBA schemes early in his career.

Dunn’s strong play has gotten him a lot of attention and it has only helped his NBA draft stock. He has shown growth in each of his collegiate seasons, which is exactly what NBA talent evaluators want to see. It seems that, barring injury, he has solidified himself as a top 10 pick in the 2016 NBA Draft. Some executives even believe Dunn belongs in the top five. The draft is obviously a long time from now and a lot can still change (especially once we find out the draft order and pre-draft workouts begin), but there’s no question that Dunn has significantly improved his game and impressed NBA decision-makers thus far.

The biggest knock on Dunn will be that he’s older than many other prospects in his draft class since he’s turning 22 years old in March. This is a legitimate concern, as an older player typically doesn’t have as much upside as a younger prospect. Some teams will question if Dunn is close to reaching his ceiling and instead decide to pick a younger point guard (such as Kentucky’s Jamal Murray, who will be just 19 years old on draft night and is projected to be selected around the same range as Dunn).

However, there are also some positives that come with Dunn’s age. Because he’s older and more experienced, he will be one of the more NBA-ready prospects in the draft. Rather than needing several years to develop before making an impact, he should be able to contribute at a high level right away. For a team that believes they’re one piece away, perhaps Dunn is a perfect fit. Damian Lillard of the Portland Trail Blazers and Elfrid Payton of the Orlando Magic are recent examples of point guards who were older than their draft peers, but still managed to be selected in the lottery and go on to play very well immediately. Lillard won the Rookie of the Year award and was named an All-Star in two of his first three seasons, while Payton started all 82 games for Orlando in his first season and finished fourth in the 2014-15 Rookie of the Year voting.

Even though Dunn has played very well and seems poised to be a high lottery pick in June, there are still some aspects of his game he must improve. He needs to work on his jump shot, as it remains his biggest weakness. His three-pointer, in particular, needs to improve. This season, he’s shooting just 27.2 percent from beyond the arc. That number has to increase significantly. If he’s struggling this much from the college three-point line, how badly will he shoot from the NBA three? That’s the question NBA executives will be asking if he continues to shoot the ball poorly.

In recent years, his other weakness had been turnovers. However, so far this year, he’s made huge strides when it comes to protecting the ball and making smart decisions. This season, his turnovers per game (2.3) and Turnover Percentage (12 percent) are career-lows. Both are down significantly; his turnovers decreased from 4.2 last season and his Turnover Percentage the previous three years had been 22.6 percent, 40.7 percent and 23.8 percent. Making his improvement even more impressive is the fact that his usage rating this year is the highest of his college career. That means the ball is in his hands way more this year, yet he’s turning it over way less than in the past. That’s huge for his development. He needs to keep that up because it makes him much more valuable as a floor general.

Dunn has worked very hard to improve his ball-handling and decision-making, and he credits former Providence star and current assistant coach God Shammgod with helping him. They first met during Dunn’s freshman year and the two bonded because they were both McDonald’s All-Americans when they were in high school. Shammgod joined Ed Cooley’s staff and they have been working together every summer since.

“He has helped me a lot,” Dunn told Basketball Insiders. “We’ve done a lot of drills to improve my ball-handling, read a ball screen, perfect my decision-making and things like that.”

Dunn loves his workouts with Shammgod and hopes to continue the sessions moving forward. The two have developed a strong bond, with each stating that they have a big brother-little brother relationship. Dunn has learned a lot from Shammgod, who is most known for his incredible ball-handling skills and the “Shammgod” crossover that he created while in college. Prior to becoming a coach, Shammgod’s professional career lasted 20 seasons and took him to many different countries around the world. He has plenty of lessons – on the court and off the court – to pass on to Dunn.

“In the summer, that’s my guy,” Dunn said. “I’ve been going to him every summer and I’ve been getting better every year because of him, so I just try to stay with him and work with him as much as possible. … I’m always picking his brain and asking him how to get better because he’s so knowledgeable when it comes to the game. But what a lot of people don’t know is the off-court stuff. He’s been a mentor to me on the court, but really I view him as a big brother who has also been there for me off the court. We’re always discussing things that have nothing to do with basketball and he has taught me a lot about life in general. There’s just so much that he has done for me and I appreciate all of it. He’s one of the first guys who I go to if I’m having a bad day or a bad game because he’s been there, knows what it’s like and how to bounce back. He has so much life experience that he can share.”

Shammgod praises Dunn’s work ethic, attitude and drive. The assistant coach believes that Dunn will be a special player in the NBA and has enjoyed watching him emerge as a star.

“We worked hard all summer, so it’s been great to see all of that work pay off for Kris,” Shammgod told Basketball Insiders. “Kris is like my little brother, that’s how I view him. Seeing him have success is the ultimate reward for me. He’s an elite player.”

Keep an eye on Dunn throughout the remainder of the season, as he’s one of college basketball’s biggest stars and capable of putting up monster numbers on any given night. NBA scouts and executives will certainly be watching closely too.