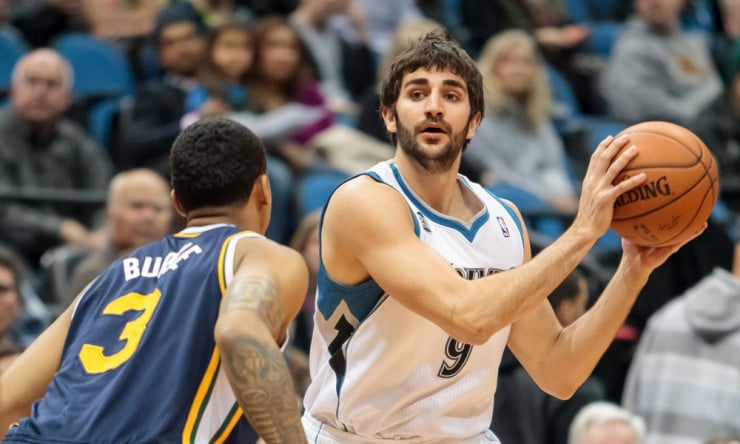 For a team which recently lost the face of its franchise over the past five or so years, the Minnesota Timberwolves have put together a pretty solid offseason. The team dealt All-Star forward Kevin Love to the Cleveland Cavaliers after it became apparent the player wanted to test free agency – and almost certainly leave Minnesota in the process.

The Timberwolves were able to net the last two No. 1 overall picks, Andrew Wiggins and Anthony Bennett, forward Thaddeus Young and a future first round pick. The team may not see an immediate rise in the standings in the short term, but the talent level increase could lead to a future boom.

The next order of business is the contract status of point guard Ricky Rubio. The guard is eligible to sign an early extension before the October 31 deadline or the Timberwolves can elect to let the market set his value in restricted free agency next summer.

Timberwolves general Manager Milt Newton says he would love to keep Rubio in town but maintains the franchise isn’t in a rush to give Rubio an extension at the moment.

“If we can get something done sooner, great. If not, we’re not necessarily in a rush,” Newton told Andy Greder of the Pioneer Press Thursday.

Rubio’s agent, Dan Fegan, is reportedly seeking a max deal for Rubio  and while Newton admits there have been contract  discussions it also is apparent no deal is imminent.

“Knowing Ricky the person, he wants to be here,” Newton said. “We just have to deal with his agent.”

The Timberwolves have banked a lot of their hopes over the past few seasons in Rubio. The team drafted him with the fifth overall pick of the 2009 draft passing on players such as Stephen Curry and DeMar DeRozan and Ty Lawson.

The club waited full two seasons for him to arrive from overseas, then the guard suffered a season ending injury as a rookie. Off the court, then general manager David Kahn also refused to give Love a five-year deal, opting to reserve that for Rubio which no doubt had a strong impact on the forward’s disgruntled mental state prior to his departures.

Minnesota is in a state of transition and Rubio has proven to be an effective, not spectacular, floor general. The question is how much should the Timberwolves invest in Rubio’s future potential, proactively. Or should the team wait for next summer where another franchise could choose to overpay and put pressure on Minnesota to match a max level deal.

The United States Men’s National Basketball Team just completed another successful overseas tour by winning the Gold Medal at the 2014 FIBA World Cup in Spain. Team USA carried the gold despite not having some of the country’s best players on the roster, for a variety of reasons, during the competition.

Next stop the 2016 Summer Olympics.

Competition for a roster spot on the next Olympic team will be fierce, with little room for error for the participants. The stacked field seemingly doesn’t allow for any sleeper candidates, not already on the radar, to make any waves.

However this isn’t stopping Detroit Pistons shooting guard Jodie Meeks from dreaming – big. Meeks was inspired by teammate Andre Drummond’s involvement with the gold medaling team in Spain this month.

“I’m happy for him,” Meeks told the Bellingham Herald of his happiness for Drummond. “It’s a great honor to play on the USA team, and I know he put in a lot of hard work. He has improved a lot between his first and second (NBA) year, and hopefully, he’ll do the same in his third year. Hopefully, one day, I’ll get a chance to participate in that and be with him.

“(Being on the Olympic team in 2016) would be an honor and a dream come true. I know it’s a long way down the line, and we still have a full season ahead, but anytime you have a chance to play for your country, it’s an honor.”

The Pistons signed Meeks to a three-year $19.5 million during free agency and the veteran will compete with second year guard Kentavious Caldwell-Pope for minutes at the two spot.

Meeks has also logged stints with Los Angeles (Lakers), Milwaukee and Philadelphia since entering the league.

Almost a decade ago, the NBA was facing an image problem. Then commissioner David Stern elected to enact a strict dress code in order to face the rising criticism. Some felt the move was racially insensitive to the culture a lot of the players grew up in. Others felt the move was less sinister in nature and was purely business and made to enhance professionalism.

Whichever side of the fence you landed on at the time there’s no doubt the code helped ushered in the NBA fashion era. More than ever guys are taking pride in their wardrobes and the league’s image by and large has been strengthened.

Future Hall of Fame guard Dwyane Wade admits struggling with the dress code at first and then embracing it as a way of life after the dust settled.

”It was like, ‘OK, now we got to really dress up and we can’t just throw on a sweat suit,”’ Wade told The Philippine Star. ”Then it became a competition amongst guys and now you really got into it more and you started to really understand the clothes you put on your body, the materials you’re starting to wear, so then you become even more of a fan of it.

”Obviously sometimes we push the envelope, and I think it’s because we’re athletes. ‘We’re not looked at as guys who should wear certain things. Being flamboyant is being OK.”

Quick Notes around the L

According to Real GM, the Washington Wizards have signed former first round pick Damion Jones

According to multiple reports, the Sacramento Kings have signed forwards Omri Casspi and Ryan Hollins