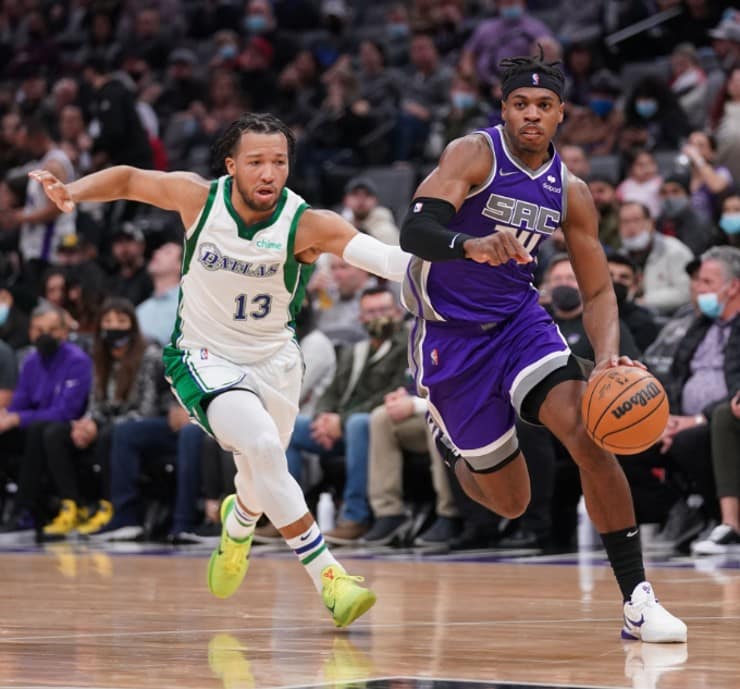 In tonight’s Western Conference thriller on New Year’s Eve, the Dallas Mavericks (16-18) are aiming to bounce back versus the Sacramento Kings (15-21) at Golden 1 Center. Will De’Aaron Fox and the Kings extend their winning streak to three games?

Leading into Friday night’s intraconference game, the Mavericks are 16-18 against the spread in the 2021-22 NBA regular season, while the Kings are 16-20 against the spread. The tip-off time for this contest is 6 p.m. ET. This competitive matchup will air live via Bally Sports New Orleans, Bally Sports Oklahoma, Bally Sports Southwest, NBA League Pass and NBC Sports California. Referring to Land of Basketball’s database, based on 174 head-to-head regular season games played all-time, Dallas is 97-77 versus Sacramento. As of now, the series is split this season at 1-1.

In Wednesday’s contest, the most recent meeting this season, Sacramento defeated Dallas 95-94 at Golden 1 Center. In other news, one day after the Mavs signed free agent guard Isaiah Thomas, the 32-year-old entered the league’s health and safety protocols. The team has a total of seven players out due to COVID-19. Five days ago, the Lakers opted not to re-sign Thomas to a second 10-day contract. Earlier on Friday, the Mavs organization signed forward Marquese Chriss to a 10-day contract. In four games played this season, Chriss averaged 6.3 points and 4.8 rebounds. He will wear the No. 32 jersey.

The Dallas Mavericks have signed forward Marquese Chriss to a second 10-day contract under the COVID-related hardship allowance. https://t.co/sVTevsogNx

There's just no end to the chaos as COVID-19 claims another Maverick, Isaiah Thomas, who had been with the team one day.
https://t.co/SanI7VQXCE

Additionally, in the Mavs’ 95-94 road loss versus the Kings on Wednesday, guard Jalen Brunson scored a team-high 25 points in 36 minutes played. Forward Kristaps Porzingis had 24 points, 7.0 rebounds and 3.0 assists in 35 minutes on the court as well. In the opening quarter, Dallas outscored Sacramento 30 to 20. Nonetheless, the Kings held them to just 13 points in the second quarter.

Of all players the team is missing right now, it’s definitely Luka Doncic. They shot 38-for-81 (46.9%) from the field and 9-for-24 (37.5%) from behind the arc. Following this defeat, the Mavs have won four of their last 10 games. They are now 8-10 away, 8-8 at home and 10-8 ATS away this season. They rank eighth overall in the Western Conference. The team has to keep winning if they want to maintain a top-eight playoff spot.

Referencing ESPN’s Basketball Power Index, the Kings have a 60.7% probability of winning.

Meanwhile, the Kings’ nail-biting victory over the Mavs, guard De’Aaron Fox led his team in scoring, finishing his performance with 16 points in 34 minutes of action. Both Harrison Barnes and Davion Mitchell earned 14 points, too. Tyrese Haliburton added one more double-double to his career total, with 12 points, 2.0 rebounds and 10 assists in 36 minutes played.

Sacramento outscored Dallas 46 to 40 in the paint. Not to mention, they shot 36-for-75 (48%) from the floor and 10-for-26 (38.5%) from three-point range. Notwithstanding the team winning only four of their past 10 games, they have won back-to-back games. Despite struggling, the Kings have one of the healthiest rosters in the league. They are now 9-11 at home, 6-10 away and 9-11 ATS at home this season. Sacramento ranks 11th in the conference.

As for the Kings, they are 6-3 ATS in their previous nine performances. Also, the total has gone under in Sacramento’s last six contests versus Dallas. On the flip side, the total has gone under in five of the team’s past six games when playing at Golden 1 Center against the Mavs. All in all, think about picking the Kings to win and cover the spread. If you have never placed a bet or you’re an experienced gambler wanting to brush up on what you already know, read our handicap betting guide for good measure.

Pick the Kings to win, they will cover the spread and the total will go over 218. Sacramento is a two-point underdog at home with BetOnline.