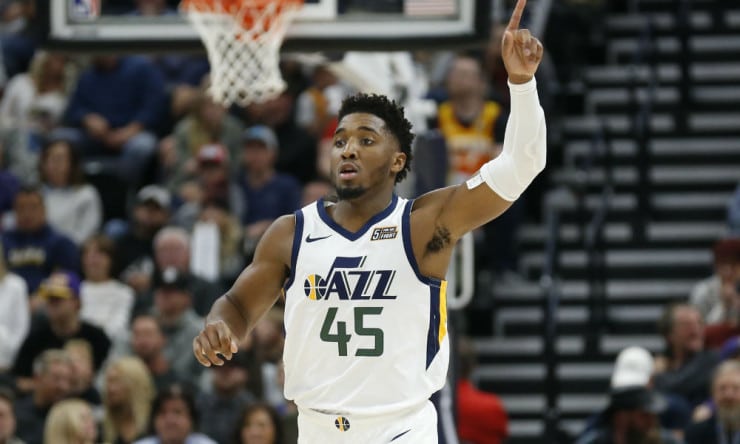 The Utah Jazz made quite the splash this past summer when they signed free agent Bojan Bogdanovic and traded for 12-year veteran point guard Mike Conley. Those were followed up by a fury of additional moves on a lesser scale that had the Jazz looking like title contenders once again.

Conley got off to a slow start as the floor general, which shouldn’t come as a surprise. Now that it appears he has found his comfort zone, as Utah’s offense is coming together. The former All-Defensive team guard has looked more like the Mike Conley of old, averaging more than 15 points and 5 assists in the month of November.

One of the key benefits of having a guy like Conley on your roster is his ability to get guys open and find them in good spots. That combined with taking the burden off of Mitchell as the primary ball-handler has resulted in success for the Jazz.

Entering his third season Donovan Mitchell was a prime candidate to become a breakout star in the league. He may not have hit that mark yet, but his trajectory is taking him there. The former Louisville Cardinal just turned 23 years old in September, but now doesn’t have to shoulder the entire offensive load in Utah. His shot selection has greatly improved with Conley at the helm.

Known as a volume scorer in his first two seasons in the NBA, Mitchell has emerged as an efficient offensive weapon. Through 19 games this season, the athletic shooting guard is averaging 25.3 points, 5.1 rebounds, and is shooting 84 percent from the line, 45 percent from the floor, and 38 percent from deep. Those are all currently career-high numbers for Mitchell. While the assists are slightly down (3.9 to 3.7), that can be attributed to his usage rate, which has decreased with Conley taking over the reins of the offense.

Mitchell’s Player Efficiency Rating has increased all three years, from 16.74 in his rookie year, to 17.26 last season, and now 21.29 through 19 games. With his usage rate dropping, so have his turnovers. That is an important statistic to coach Snyder, as the Jazz finished the season 27th in turnovers last year. Only Phoenix, Atlanta, and the LA Lakers were worse in that category.

The large contract that Utah gave Bojan Bogdanovic is proving to be money well spent. The versatile forward is thriving in this offense, making things easier for everyone. He has always been an underrated defender and has provided a great wrinkle on that end of the floor as well. He is the ideal player for Utah’s system, and it is showing.

Playing alongside a point guard that can shoot, and another incredible offensive threat on the wing, things have really opened up for Mitchell to flourish. Rudy Gobert continues to be a steady threat at the rim. The defense can no longer load up and force Donovan into difficult shots, and their offense is showing that.

The Jazz currently rank fifth in three-point percentage and in the top half of the league in overall field goal percentage. Over their last five contests, Utah is averaging more than 112 points per game.

As of last week, the only four players in the league with as many points, rebounds, and assists as Mitchell were Giannis Antetokounmpo, James Harden, Paul George, and Luka Doncic.

Quin Snyder currently has the Jazz humming on defense, which is their bread and butter. The offense has obviously gotten better, but there is still room for improvement. Joe Ingles has been a ghost this season, a far cry from the norm. That could just be him getting accustomed to his role off the bench.

Last night Mitchell played well in their victory in Memphis, making up for their 1-point loss in the same building two weeks prior. Utah now stands at 12-7 with a tough test coming up.

The next three games for Utah will not be easy. They travel north of the border to play the defending champion Toronto Raptors on Sunday, followed by a tough turnaround in Philadelphia against the 76ers the following night. They return home on Wednesday to play host to LeBron James and the LA Lakers. Fortunately for Utah, things get much easier after that.

Their two most difficult games over the course of their next 20 are matchups with the Miami HEAT and the LA Clippers. Outside of that, the schedule is full of Chicago, Atlanta, Charlotte, Orlando, Washington, Golden State, Detroit, and New York.

Gobert continues to be the anchor of the league’s best defense. The big man recently returned from his injured sprained ankle, and Ed Davis continues to recover from a broken fibula. When Ingles finally returns to his normal self, the Jazz should be ready to match all of the high expectations. For Joe, that means putting the ball in the basket. His scoring average is half of what it was last season, and it has been killing the offense on their second unit.

After setting the league on fire during his rookie season, Mitchell experienced the sophomore slump that ended with a first-round exit after shooting 32 percent from the floor in the playoffs. Now with a reloaded roster around him, the electric guard is proving he belongs in the All-Star game.

That being said, the key going forward for Mitchell is ditching the hero-ball antics. While the Jazz do need timely late-game buckets, it doesn’t necessarily mean Donovan needs to try to take over the game by himself. Utah has always relied heavily on their team success, and that is no different with this squad.

The fact is Mitchell was the only offensive weapon the Jazz have had in the past two years. Things are different this time around, though. The ceiling for Mitchell is high, and so are the expectations for the Jazz as they aim to return to the Conference Finals for the first time since 2007.