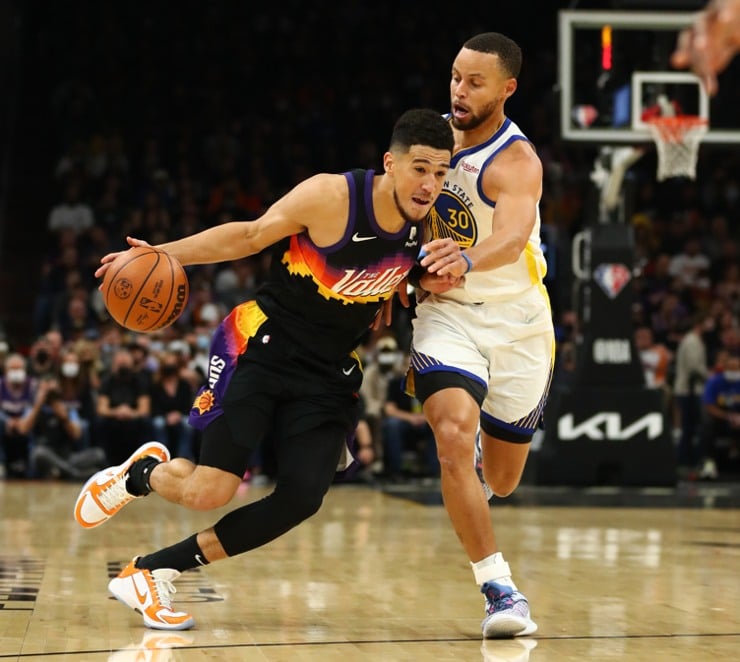 NBA Max Contracts for Guards in 2022

While forward Giannis Antetokounmpo and centers Nikola Jokic, Karl-Anthony Towns and Rudy Gobert also signed $200 million contracts, this article is focusing solely on guards. Without a perimeter shooter or agile defender in the backcourt, a team suffers. Continue scrolling to view the seven guards featured here with NBA max contracts.

First off, Russell Westbrook signed a five-year, $205 million contract with the Thunder on Sept. 29, 2017. This was two years before the team traded him to the Rockets. Last month, the nine-time All-Star opted in with the Lakers for the 2022-23 season. The guard is entering the final year of his contract.

Not to mention, he earned his first All-NBA Third-Team selection this past season. On Jan. 3, in the Hawks’ 136-131 loss to the Trail Blazers, Young scored a career-high 56 points. He shot 17-for-26 (65%) from the field. The soon-to-be 24-year-old is one of the highest paid guards in the NBA for the reasons listed above.

Last season, Doncic ranked third in the league in scoring, averaging 28.4 points per game. Along with being the Mavs’ top scorer, the guard averaged 9.1 rebounds, 8.7 assists and 1.2 steals per game as well. He earned his third NBA All-Star selection and All-NBA First-Team selection. Go to the main page for other articles pertaining to NBA max contracts.

Stephen Curry signed a four-year, $215 million contract with the Warriors on Aug. 2, 2021. The guard averaged 25.5 points, 5.2 rebounds and 6.3 assists per game with his team. Curry won his fourth championship and first NBA Finals MVP last season. He also won the league’s first ever Western Conference Finals MVP after averaging 23.8 points, 6.6 rebounds and 7.4 assists per game against the Mavericks.

In the Warriors’ season-opener against the Lakers, the guard posted his eighth career triple-double, finishing with 21 points, 10 rebounds and 10 assists. In the 2022 NBA All-Star Game, Curry scored 50 points and set a record for most 3-pointers made in a single All-Star quarter (6). He won his first NBA All-Star Game MVP, and the guard received his third All-NBA Second-Team selection.

After averaging 26.8 points, 5 rebounds, 4.8 assists and 1.1 steals per game last season, Booker received his first All-NBA First-Team selection. The guard ranked eighth in the NBA in scoring. And he averaged 46.6% shooting from the field and 38.3% from downtown.

The 10-year veteran underwent season-ending wrist surgery in February. Of course, in the 2020-21 season, Beal averaged 31.3 points per game, and he ranked second overall in scoring behind Stephen Curry.

If he can play at least 60 games each season for the remainder of his NBA career, this contract is fine for Washington. Even then, the Wizards have not made it past the first round of the playoffs since the 2016-17 season. Other articles related to NBA max contracts are on the main page.