Admittedly, it takes years before one can accurately judge an NBA draft class. However, there is something to be said for first impressions and the 2015 rookies have lit up the league in their first NBA season.

It’s somewhat surprising how effective this group has been in year one, since many of the top players in this draft were selected based on their long-term potential rather than their track record or NBA-readiness. Eleven of the 14 lottery picks were one-and-done college players or international teenagers, so immediate results weren’t really expected. However, a number of players from this class are ahead of schedule and already making their presence felt. 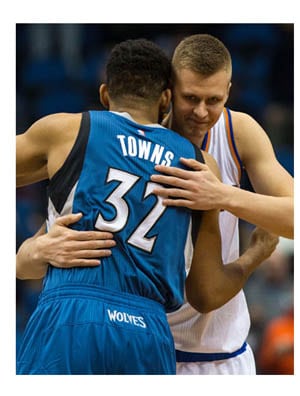 The only rookie in recent years to average more points than Towns and Okafor was Damian Lillard, who put up 19 points a night in his first year with the Portland Trail Blazers and went on to win that season’s Rookie of the Year award. But unlike Towns, Okafor and many of the other top prospects in this class, Lillard had spent four years in college, so he was expected to enter the league and contribute at a high level right away.

The fact that this year’s super-young rookies are already doing so well suggests that this could go down as one of the better drafts in quite some time. As previously noted, it does take time to thoroughly evaluate and properly assess a class. But if these early indicators progress and this draft produces a solid batch of stars, that would be excellent for the NBA because, quite frankly, it’s been awhile since there has been a class that’s star-studded and deep.

It’s too early to judge the 2014 class, although one could argue that it has been a disappointment thus far – outside of Andrew Wiggins – just because it was so hyped up and there are still so many question marks surrounding a lot of the players.

It may be too early to write off the 2013 draft too, but as of now, it has been pretty underwhelming. That draft has yet to produce a single All-Star and the No. 1 pick – Anthony Bennett – is currently out of the NBA after being cut by his hometown Toronto Raptors. The best players from the class were pleasant international surprises who exceeded all expectations after being picked outside of the lottery (Giannis Antetokounmpo and Rudy Gobert). The next-best from that class are C.J. McCollum, Nerlens Noel and Victor Oladipo – all of whom are very solid players, but not bona fide stars (at least not yet).

The last draft to produce a number of stars was 2012, as it yielded Anthony Davis, Damian Lillard, Andre Drummond, Draymond Green and Bradley Beal. However, the draft wasn’t very deep and many of the non-star players from that class are now out of the league or are journeymen.

The point is, it’s been a few years since the NBA had a loaded draft class (and, unfortunately, some experts are projecting that the 2016 NBA Draft will be relatively weak as well). So if the 2015 class could produce a batch of stars as well as a group of talented contributors, it could help restock the league’s cupboard.

It’s looking like Towns, Okafor, Porzingis, Russell, Mudiay, Booker, Turner and Jokic could be stars if they continue on their current trajectory and reach their full potential.

Towns seems poised to win Rookie of the Year, leading all rookies in scoring and rebounding. Despite just turning 20 years old in November, he’s averaging 18 points, 10.3 rebounds, 1.7 assists and 1.7 blocks while shooting 54.6 percent from the field and 81.1 percent from the charity stripe. The most impressive thing about Towns’ rookie year is that he has 41 double-doubles in 70 games. That obviously leads all rookies (no other first-year player has more than 18 double-doubles), but it’s also the sixth-most double-doubles among all NBA players. Just to put this number in perspective, Towns has more double-doubles than veteran All-Stars Anthony Davis (36), Chris Paul (34), Draymond Green (27), Kevin Durant (26), LeBron James (24) and Carmelo Anthony (22) among many others. He has also been incredibly efficient, with a 22.87 PER that ranks 15th in the NBA among all players (higher than a number of All-Stars). Towns has been so good this season that one could make the case that the 2015 NBA Draft has already produced its first star.

Okafor has been extremely impressive as well, even if the Philadelphia 76ers have struggled mightily. Okafor is averaging 17.5 points, seven rebounds and 1.2 blocks while shooting 50.8 percent from the field. Earlier today, he underwent an arthroscopic procedure to address a slight tear of the meniscus in his right knee, which hopefully doesn’t limit him at all going forward. Prior to that injury, Okafor was looking like a cornerstone for the 76ers. He’s years ahead of where most centers are offensively when they enter the NBA, showing the post moves, footwork, patience and basketball IQ of a veteran. He improved as the season progressed, and it was clear that he benefited from the 76ers trading for veteran point guard Ish Smith, who could run the offense, set him up for easy baskets and put him in position to be successful. Towns has Ricky Rubio dishing him passes, which is a huge advantage for him, but Okafor made the most of his situation and supporting cast in Philly and still posted very good numbers. He had some off-court trouble, but nothing major. While his behavior must improve, he is an intense competitor who was frustrated with all of the losses given his life-long success on the court. He’ll have to show more maturity off the court going forward, but there’s no question Okafor could emerge as Philly’s franchise player. It’s going to be fun to watch Towns and Okafor develop (and battle one another) for years to come.

Porzingis was the biggest surprise out of the top prospects. Everyone knew he had a high ceiling, but very few people thought he’d be one of the New York Knicks’ best players from day one. He is currently averaging 13.9 points, 7.2 rebounds and 1.9 blocks. He’ll have to improve his shooting percentages (41.5 percent from the field and 32.7 percent from three-point range), but that’s just nitpicking since Porzingis is such a unique player who can contribute in so many ways. He’s an athletic freak, he can shoot threes, he can defend at a high level and he breaks all of the stereotypes traditionally associated with overseas players. Carmelo Anthony is the star of the Knicks right now, but soon they’ll be building around Porzingis. Phil Jackson has been criticized for some of his decisions since taking over as Knicks president, but he hit a home run when he drafted Porzingis fourth overall. Nobody in New York is booing the kid now.

Russell has been criticized quite a bit since he was drafted ahead of Okafor and is under the microscope as a member of the Los Angeles Lakers, but he still has star potential. The way head coach Byron Scott has developed Russell this season has been baffling – from limiting his playing time to making negative comments about the rookie to the media. Still, it seems like Russell is starting to gain some confidence and showcase his talents. On the season, he is averaging 13.3 points, 3.5 assists, 3.5 rebounds and 1.2 steals in 27.7 minutes. In March, Russell has averaged 18.8 points and seems more comfortable running the Lakers’ offense and taking over when necessary. Russell may not be lighting up the league like some of his fellow rookies, but the potential is there and he’s making strides slowly but surely. It’s assumed that the Lakers will make a coaching change this summer and Russell could really benefit from that.

Rounding out the list of immediate-impact rookies are Denver’s Mudiay (12.1 points, 5.6 assists, 3.3 rebounds and one steal); Phoenix’s Booker (12.5 points, 2.4 assists and 2.3 rebounds while being a terrific shooter); Indiana’s Turner (10.5 points, 5.3 rebounds, 1.5 blocks despite still being just 19 years old); and Denver’s Jokic (10 points, 6.5 rebounds, 2.2 assists and one steal in 20.8 minutes, while shooting 51.1 percent from the field). Again, it’s very possible that years from now, players like Johnson, Winslow, Hezonja, Payne, etc. could also be considered stars; that’s just a testament to this class’ talent and depth.

Now, it’s always possible that the early numbers posted by some of these rookies could just be a fluke and they’ll come back down to earth. It happens – sometimes due to injuries, a change of scenery or just simply regression. One example of this is 2013-14 Rookie of the Year Michael Carter-Williams, whose production has decreased each season since he won the award and is now on the Milwaukee Bucks. Left hip surgery recently sidelined him for the remainder of the season, but he was coming off of the bench prior to the injury, showing how far his stock had dropped.

Even with that said, there’s no denying that the early returns are promising for this year’s group – especially because they are so young. In talking to people in NBA circles, there’s a lot of excitement to watch this draft class develop over the next decade. The thought is, if they’re already playing this well now, how much better can they be several years down the line when they’ve been in a development program, have some professional experience and, in some cases, a better supporting cast?

Since many of these players were drafted largely because of their high ceiling, their best basketball is almost certainly ahead of them. It’s still early, but years from now we could look back on this draft as one that significantly changed the landscape of the NBA and provided the league with a number of new stars.