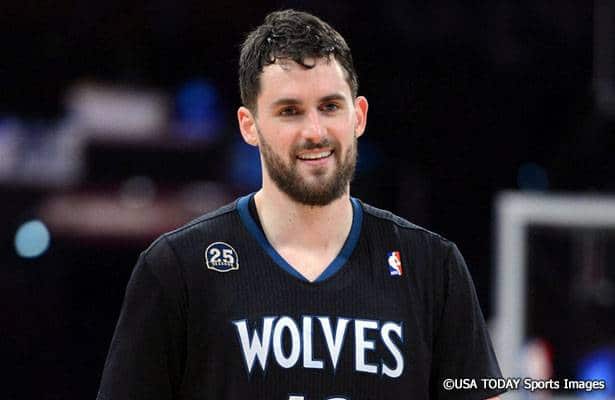 According to Ken Berger of CBS Sports, the Dallas Mavericks and Los Angeles Lakers are positioning themselves to try and acquire All-Star power forward Kevin Love from the Minnesota Timberwolves in hopes that the Timberwolves move him before Thursday’s trade deadline.

Up to this point the Timberwolves have shown no indication that they are willing to move the face of their franchise, Berger writes.

Love is going to become a free agent at the end of next season and as of right now it’s hard to imagine why he would re-sign with the Timberwolves. First-year general manager Flip Saunders came in and made some quality moves this offseason, but the team is still not competing at the level Love would like. Come next offseason, there are going to be several teams lining up, most of which have other stars who can help Love carry the load, to sign him. While Minnesota will have his Bird rights and the ability to offer him an extra year that other teams can’t, the consistent trips to the lottery and lack of optimism about the future could be more than enough to get him to sign elsewhere.

Only a few teams are going to be willing to part with serious assets to acquire him, though, without assurances that he’s going to re-sign with them long-term. That limits the Timberwolves’ trade prospects, but the Mavericks and Lakers are two franchises willing to take that risk without assurances.

During the David Kahn era, the Timberwolves were quite interested in Pau Gasol, who was playing inspired basketball in the month of January before suffering a minor groin injury that still has him out of the lineup. He’s a $19 million expiring contract and unlike Love, the Timberwolves could likely re-sign him to a long-term deal this offseason. At this late stage of his career, though, Gasol is a significant downgrade from Love and it’s likely not a move that the Timberwolves would accept since at this point they still have the ability to salvage this season and improve over the offseason to try to appease Love. That’s the kind of move you make when the pressure of losing him while getting nothing in return is immense, and it just isn’t yet.

It’s unclear exactly what the Mavericks would offer, but they seem even less likely than the Lakers to give Minnesota something worth coming off of their current stance. You can’t make a trade without trying, though. Consider this foreshadowing of what’s to come with Love. The Big Three in Miami will likely have new deals this offseason and the longstanding Carmelo Anthony saga will come to an end as well. Love’s going to be the top player in the game heading toward free agency, and as a result the Timberwolves’ phone will be ringing and speculation will surround them until the day a decision is made.

Given how similar situations have played out in the past, Saunders may want to back off of his stance that Love is unavailable, because he could end up passing on offers he’s going to regret not considering later.

Basketball Insiders launched our first digital magazine last week, an in-depth 2014 NBA Trade Deadline Guide. The issue can be purchased on Turn-Page, which allows you to view the magazine on your desktop, tablet and smart phone. It can also be purchased through the app store for Apple devices and Android devices. Here are some excerpts from the magazine’s features.

We’re at the time of year where almost every player who has some kind of value is mentioned in trade rumors. Only time will tell how much validity there is to those rumors and whether those players will be dealt or not, but if there’s anyone who seems like he has to be dealt, it’s certainly Houston Rockets backup center Omer Asik.

At one point this season, the Rockets put in a self-imposed deadline to move him in order to have the option of flipping whatever they received at the actual trading deadline in the case that the move didn’t pan out. They bypassed that date because they didn’t receive any offers to their liking, but the fact remains that holding onto Asik makes very little sense.

First, Asik doesn’t want to be there. He’s wanted out since the Rockets signed Dwight Howard, and while at the time there was some logic to holding onto Asik in the case that Howard, who dealt with nagging injuries throughout the last year and a half, continued to be plagued by the injury bug. However, Howard is looking much more like the iron man he was back in Orlando. Asik’s value to teams throughout the league is much higher than it is to the Rockets, but dealing him is far from easy.

Because of the way the Rockets structured his contract when they signed him to an offer sheet as a restricted free agent with the Chicago Bulls, he’s slated to make $15 million next year, although he’ll only count against the cap for $8.4 million. When the $8.4 million is the number you pay attention to, that’s a bargain rate for a young big man who proved to be one of the most productive starters in the league last season. Far too often, though, when talking about potential transactions we spend owners’ money far more frivolous than they would. The $8.4 million that Asik counts against the cap doesn’t concern them at all, because the check that they’re going to have to write for him is nearly double that. At $15 million, Asik is closer to overpaid than a bargain.

The Philadelphia 76ers were mentioned as one of the frontrunners for Asik during that aforementioned self-imposed deadline they put into place, and now Berger also reports that they’re back in the mix.

They’re $11 million under the payroll, which gives them the space to simply absorb Asik’s contract without having to give the Rockets anything in return. Only, the Rockets, up to this point at least, have maintained that they at least want to get a first-round pick in return for Asik. As Berger pointed out in his article, the 76ers have draft picks, but they’re far more interested in adding more, not giving any away.

While the Rockets have a talented player in Asik, there isn’t an owner in the league who would want to spend $36 million on two centers. It’d be one thing if they could at least play off of each other for stretches, but the Rockets tried that experiment earlier in the year and it failed miserably.

It’s coming up on extension time for Chandler Parsons, who is poised to receive a significant raise from the $926,500 he’s earning this season. They could potentially put off extending him until next summer when Asik’s contract would be off of the books anyway, but there’s still little reason to hold onto him, especially given the price. Even giving him up to Philadelphia for a traded player’s exception beats paying him $15 million while getting little-to-no production.

There are other reports out there that the Rockets are not dead-set on trading their backup center, and hey if your ownership is willing to drop $15 million on a backup that’s a nice luxury to have. But, this is an organization known for making smart, calculated moves and keeping Asik would not be one. It’ll be a big surprise if he’s on the team past Thursday.