Prior to the start of the 2013-14 NBA season, Damian Lillard had three goals.

“First of all, I want to make the playoffs, I want to try and make the All-Star team and I want to be an All-NBA player,” Lillard told Basketball Insiders in Las Vegas. “There’s a lot of stuff I want to do.”

Well, Lillard accomplished all three of his goals during the NBA season, leading the Portland Trail Blazers to the second round of the playoffs, making his first All-Star appearance as a Western Conference reserve and being selected to the All-NBA Third Team this afternoon.

This was a remarkable season for Lillard, who is only in the second year of his NBA career. Last year’s Rookie of the Year followed up his strong freshman campaign with an even more impressive sophomore year, and he has now solidified himself as one of the top point guards in the NBA.

It’s clear that Lillard is becoming a household name, especially after hitting the series-clinching shot to defeat the Houston Rockets in the first round of the playoffs and inking a new $100 million endorsement deal with adidas that will make the young point guard a focal point for the shoe company moving forward. Lillard will reportedly receive a $250,000 bonus from adidas for making the All-NBA Third Team, so this accomplishment is even sweeter for the 23-year-old.

Lillard, who was playing for Weber State and going unnoticed just a few years ago, still can’t believe how far he has come in the last several seasons. Several months ago, I asked Lillard if his life ever feels surreal these days.

“Always,” Lillard responded. “When I see my school playing on TV, I’ll think, ‘Wow, I was out there.’ That whole time, I hoped that I was going to the NBA, but I had no idea that all of this would happen. My coach that I worked out with there would tell me, ‘Don’t just go to the NBA, go be an All-Star.’ And in my head, I’d be like, ‘Well, I want to be an All-Star, but I don’t know how possible that really is.’ The fact that I’m here and I was able to become an All-Star so soon, it’s a blessing. It was a huge honor. A lot of people don’t get that opportunity at any point in their career and I was blessed enough to get it in my second season. All of the credit goes to the team though. I was able to do that because of how successful the team was. I understand that. It’s been a lot of fun. When you’re winning, these types of things happen because everyone loves winners. More individual things come when your team is successful; I’ve always understood that. It’s been a night and day from two years ago to now. Hopefully we can keep being successful as a team and there’s more to come.

“I just take everything for what it is. I understand where I started and what had to be done for me to get here – working hard and having high character. I still appreciate those things. I appreciate just being here too. I don’t think, ‘Alright, I’m here so now I’m a big shot and nobody can tell me nothing.’ That’s not what made me who I am. I appreciate the things that made me who I am and I’ll never get away from those things. … I still have the same company, the same people around me. I’m sticking to what I’ve always done. I haven’t changed.”

adidas Eurocamp Set to Get Underway

The 12th annual adidas Eurocamp is set to get underway this Saturday, and Basketball Insiders will be in Treviso, Italy to give you all of the latest news, notes and information from Eurocamp. This is the most prestigious international pre-NBA draft camp, which features top basketball players who will showcase their skills during the three-day event.

“I’m excited to be a part of adidas Eurocamp this year,” Rubio said. “It’s an incredible way for young players from all over the world to get discovered and develop their skills.”

Teams participating this year include the under-18 adidas USA Select, the France under-20 men’s national team and Carleton University from Canada.  For the second time, adidas Eurocamp Next Generation, an elite program to enhance both on-court and life skills, joins the event and features the top under-16 European players.

adidas Eurocamp will be held at La Ghirada Sports Complex “SportCity” in Treviso, Italy. Basketball Insiders will be in the building, so keep an eye out for our coverage of this event. Here is a look at the rosters for this year’s adidas Eurocamp: 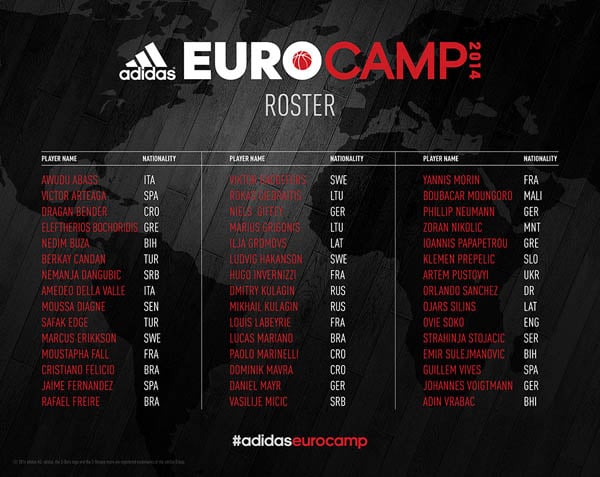 Which Team Has to Get the Draft Right?

Basketball Insiders’ Alex Kennedy, Steve Kyler, Yannis Koutroupis, Jessica Camerato and Lang Greene discuss which NBA has the most pressure on them to get the draft right. Check out the video here: