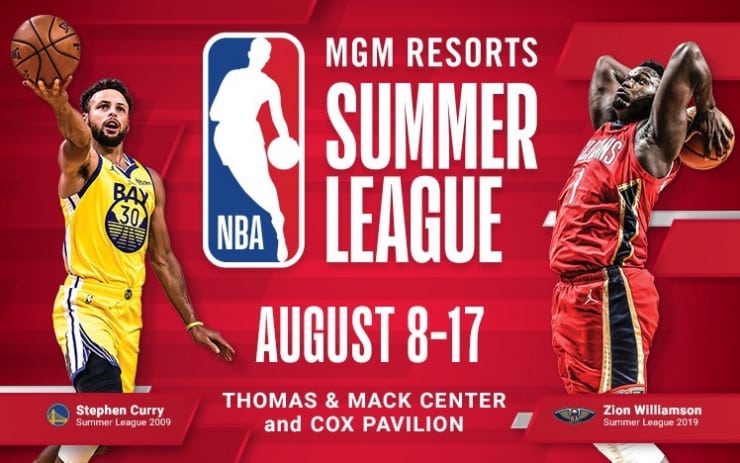 On Wednesday, the NBA announced the broadcast schedule for the MGM Resorts NBA Summer League 2021. Due to the COVID-19 pandemic, the NBA had to cancel the Las Vegas Summer League last year in 2020. Fast forward to today, the 17th annual NBA Summer League will air live this year in Las Vegas, Nevada from August 8-17. During the 10-day tournament, the 75 total games will be broadcasted on these network channels: NBA TV, ESPN, ESPN2, ESPNU, and ESPNews.

Plus, the games can be watched live with the ESPN app. WatchESPN is free, but according to ESPN.com, the user must be a subscriber of a major cable service, such as AT&T U-Verse, BendBroadband, or Xfinity. Anyways, through the NBA.com website, tickets can be bought via the NBA Events section of the site. Each of the 30 NBA teams will play a total of five games over the course of the short, competitive tournament.

The Thomas & Mack Center and Cox Pavilion stadiums will host six to eight games per day. According to the 2021 schedule, for games 17-22 on Tuesday, August 10th, only six games will be played this day. The 75th game of the competition, the final matchup, will be the championship game. The 28 teams that fail to qualify for the championship game will play their fifth and final game on either August 16th or 17th. The title game is scheduled for Tuesday, August 17th at 9:00 p.m. (EST) on ESPN.

The Summer League 2021 tips off with a matchup between the Boston Celtics and Atlanta Hawks at the Cox Pavilion. This game is scheduled for Sunday, August 8th at 1:00 p.m. (EST) on NBA TV. The first four teams selecting in the 2021 NBA Draft will also be playing on this day: Detroit Pistons (No. 1 pick), Houston Rockets (No. 2 pick), Cleveland Cavaliers (No. 3 pick), and the Toronto Raptors (No. 4 pick). At the Thomas & Mack Center, the Raptors vs. Knicks game is scheduled for 4:30 p.m. (EST) on ESPN2. Then, the Trail Blazers will face the Hornet at 6:00 p.m. (EST) on NBA TV.

For the opening game on the second day, the Pelicans will play the Bulls at 3:00 p.m. (EST) on ESPN2, followed by the Mavericks versus 76ers at 4:00 p.m. (EST) on NBA TV. There are several different games viewers can choose to watch over this 10-day span. Brandon Clarke was the most recent player to win the Las Vegas MVP award, in the Summer League of 2019. Clarke was drafted 21st overall by the Oklahoma City Thunder in the 2019 NBA Draft.