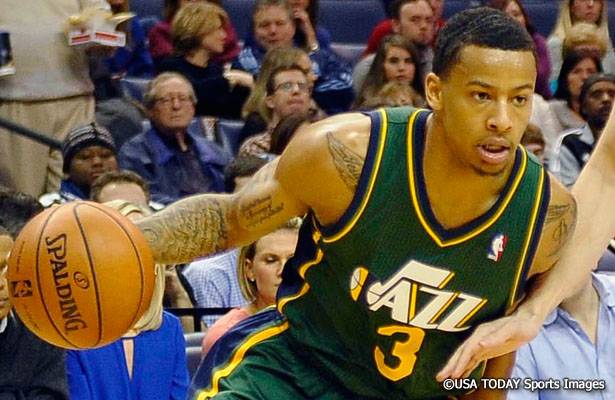 There have been a couple of really talented rookies showing their value over the course of this season, but by and large this group has been undeniably unimpressive. First overall pick Anthony Bennett is one of the league’s least valuable players, Nerlens Noel still hasn’t set foot on a court, and most of the top half of the lottery has been much closer to bust than boom.

Still, that leaves room for some unexpected rookie successes in this, the first Rookie Rankings to appear here at Basketball Insiders. We’ll track this every couple of weeks through the end of the season, but as we come up on the BBVA Compass Rising Stars Challenge at All-Star weekend in just a couple of weeks, now is a great time to take a look at the best this rookie class has to offer.

#5 – Tim Hardaway, Jr., New York Knicks
8.6 PPG, 1.4 3PM, 1.4 RPG, 14.78 PER
As Hardaway’s minutes climb, he grows ever more productive, which is pretty incredible considering how unproductive most of his teammates have been over the course of this season. Still, Hardaway has scored in double-figures in four of his last five appearances, averaging two three-pointers a game during that span. He doesn’t do much other than score, but it just so happens that scoring is something the Knicks are in dire need of. As the Knicks get themselves back on track, Hardaway continues to blossom, a rare bright spot in this misery of a season for New York.

#4 – Giannis Antetokounmpo, Milwaukee Bucks
7.0 PPG, 4.7 RPG, 1.8 APG, 11.71 PER
Antetokounmpo is the kind of player that can have back to back games of 13 points, 11 rebounds and 11 points, 7 rebounds, then put up a 6-point, 1-rebound dud the following night. But despite the fact that he’s a roller coaster of productivity, he’s one of the most exciting rookies in the class. It’s important to remember that this particular rookie is the youngest in the entire league at 19 years old, and that he’s actually still growing. As he approaches 6’10 and continues to fine-tune his skill set, Antetokounmpo could become a really dangerous NBA player. He’s too green right now, but the more we see him play, the more it looks like he’s going to get there.

#3 – Trey Burke, Utah Jazz
13.3 PPG, 5.7 APG, 3.1 RPG, 14.16 PER
At times dynamic, Burke is still finding his way in this league, particularly as it pertains to consistency. He has failed to hit double-digits in scoring in three of the last four games and has only shot over 50 percent from the field once in the month of January. The flashes of brilliance are heart-warming to Jazz fans, however, as Burke looks like a solid pro way more often than not. And the fact that Utah is over .500 in 2014 means he’s making the Jazz a better team, too. He’s going to be fine, but like many rookies, there are still quite a few kinks to work out before we can say that he’s officially “arrived.”

#2 – Victor Oladipo, Orlando Magic
13.9 PPG, 4.5 RPG, 3.8 APG, 1.6 SPG, 13.55 PER
He still isn’t a consistently efficient scorer, but Oladipo has gotten much better at avoiding those painfully awful games since January got underway. He has failed to score double digits only twice since the New Year, and the fact that he hauls in as many rebounds and doles out as many assists as he does only makes him that much more valuable. In a lot of ways, he’s been every bit as good as Michael Carter-Williams this month, and he absolutely is the building block Orlando thought he’d be when they took him with the second overall pick back in June.

#1 – Michael Carter-Williams, Philadelphia 76ers
17.4 PPG, 6.7 APG, 5.6 RPG, 2.4 SPG, 17.54 PER
There just can’t be any question at this point that Carter-Williams is the runaway favorite to win the Rookie of the Year trophy this season, thanks to incredible statistics buoyed by his uncontested role as point guard and leader of a horrible Philadelphia team with nothing better to do than get the kid as much run as possible.

But his numbers aren’t just a testament to his playing time and role; Carter-Williams is really, really good, as he’s proven to be a more adept scorer than anyone thought he’d be. That, of course, pairs well with his aggression in getting to the basket, finding open teammates, playing top-shelf defense, and even rebounding exceptionally well for a point guard. Wait until this young man gets some experience and puts on a little muscle. It won’t be long before he’s one of the conference’s top floor generals.

Pero Antic, Atlanta Hawks
5.8 PPG, 3.4 RPG, 12.46 PER
Before getting bad news about a stress fracture in his foot that will keep him out 2-3 weeks, Antic was really coming into his own, averaging 11.4 PPG and 5.9 RPG as a starter for the Hawks.

Kentavious Caldwell-Pope, Detroit Pistons
7.3 PPG, 2.3 RPG, 9.41 PER
There are nights when KCP sees 40+ minutes, which proves he’s more than just a role player, but he doesn’t score often enough to be counted on each and every game. Defensively, though, he’s been very good.

Ryan Kelly, L.A. Lakers
6.4 PPG, 2.8 RPG, 11.75 PER
The Lakers have found production from all kinds of role players this year, but Kelly is perhaps the most surprising of them. The 6’11 forward has had some very big games, and over his last 10 contests is averaging an impressive 10.4 PPG and 4.3 RPG.

Ben McLemore, Sacramento Kings
8.0 PPG, 2.8 RPG, 7.71 PER
It’s amazing what taking Rudy Gay out of the equation can do for a guy’s production. McLemore has played a ton of minutes over the course of the last week and his numbers have certainly benefited. The kid can score, but playing alongside Gay makes it hard to get touches.

Who else deserves to be mentioned here, and do any of the honorable mentions deserve a spot in the top five? Hit up the comments section with discerning options, or continue the conversation on Twitter @joelbrigham.