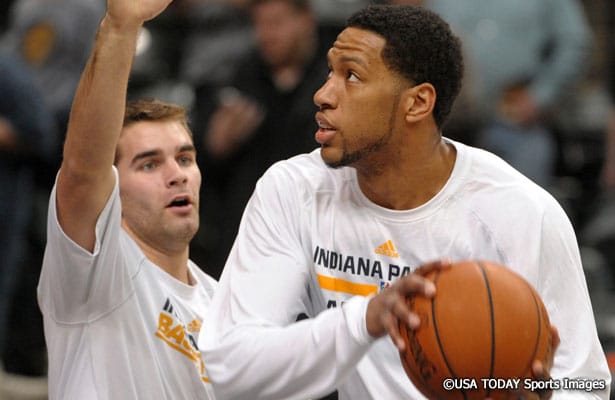 One week after being traded by the Indiana Pacers, Danny Granger is expected to sign with the Los Angeles Clippers, a source told the Indianapolis Star early Friday morning.

Granger, 30, will have to wait to sign a contract on Friday after he clears waivers.

Last Thursday, the Pacers dealt Granger to the Philadelphia 76ers and the two sides recently reached a buyout deal, allowing him to sign with a team with title hopes.

Via Candace Buckner of the Indy Star

This comes as no surprise as Granger was linked to the Clippers from the moment his buyout talks with the Philadelphia 76ers started to gain momentum. The Clippers were in search of wing depth with J.J. Redick currently out due to a hip injury.

Earlier this week the Clippers landed Glen Davis, a former champion who gives Clippers head coach Doc Rivers a familiar option on his reserve frontline. Just like they were during the summer time, the Clippers are once again winners in free agency.

Granger is years removed from playing his best basketball, but at this point of the season the Clippers couldn’t have found a more experienced or motivated swingman. This is a low-risk, high-reward move for them.

Look for the Bucks to replace Caron Butler with a young player from overseas, 10-day contract likely.

Via Gery Woelfel of the Racine Journal Times on Twitter

The Bucks bought Butler out this week in order to allow him to play the rest of the season with a contender rather than with them as they sit in last place. The Miami HEAT and Oklahoma City Thunder are said to be the leaders for his services.

The Chinese League is winding down, so there are options becoming available from that league along with the D-League. The D-League’s prospect watch currently lists Manny Harris, Darius Johnson-Odom and Terrence Williams as the best guards available, Devin Ebanks, James Nunnally and Shawne Williams as the best forwards available. Veteran center Mickell Gladness is the only true five man in their top 30.

The Chicago Bulls are closing in on signing former Sacramento Kings guard Jimmer Fredette, according to sources close to the process.

Sources told ESPN.com on Thursday that — while stressing a deal is not yet complete — serious mutual interest between the sides has made Fredette’s landing with Chicago look increasingly likely.

After completing a contract buyout Thursday with the Kings, Fredette can’t officially sign a contract with the Bulls or any other team before clearing waivers Saturday at 5 p.m. ET.

The Bulls have a need at point guard due to being playoff bound and Derrick Rose out for the rest of the year. Fredette may not jump out as the most ideal fit under the defensive-oriented Tom Thibodeau, but he holds enough promise offensively to make the move worthwhile for the Bulls.

Their primary concern is staying under the luxury tax threshold, which they’re only several hundred thousand short of right now. They have to structure the deal to make sure they stay under that, because they are not willing to become repeat tax offenders in a season where their best, and most expensive, player has been out of the lineup for most of it.

After being selected by the Kings in the lottery in 2011, Fredette’s career never took off. The Bulls present the best opportunity of his still young career, though. With them he’ll get the chance to prove he belongs and help secure his spot in the league beyond this season. His career is hanging by a thread right now, but with a strong showing with the Bulls the livelihood of it will be extended by at least another couple of seasons.