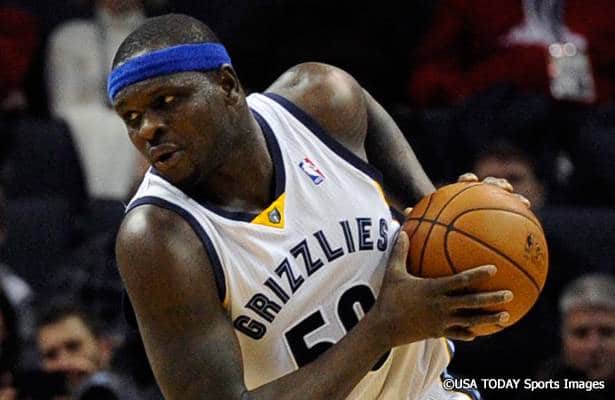 Because Randolph has the ability to be a free agent, the natural question has loomed for quite some time now whether he’ll remain part of their core if they would perhaps look elsewhere for that type of post production. Specifically, the fact that current Lakers forward and brother of Marc Gasol, Pau Gasol, will be a free agent this July led to natural speculation about whether they could make up Memphis’ frontcourt for the future.

But a person with knowledge of the Grizzlies thinking said Randolph will be the focus of their free agency affection and that the interest they have in Pau Gasol would be secondary. The relevant question on that front, it seems, is whether Pau would be so interested in reuniting with his brother in Memphis and contending for a crown that he might be willing to play a complementary role behind Randolph and Marc Gasol while accepting a contract that would likely be below market value. The person spoke on the condition of anonymity because of the private nature of such talks.

Randolph can opt out of his contract and become an unrestricted free agent this summer, or he can opt in and make $16.5 million next year. While it may seem crazy for Randolph to opt out and turn down next season’s large salary, the chance to secure a new long-term deal is attractive, especially considering Randolph will turn 33 years old this. It’s likely that this will be his last big payday.

Despite the fact that Randolph trade rumors surfaced earlier this year and the Grizzlies have been linked to free agent to-be Pau Gasol, Amick reports that Memphis’ top priority this summer is keeping Randolph.

This season, Randolph has averaged 17.1 points and 10.1 rebounds while shooting 45.8 percent from the field. Randolph and Marc Gasol form an excellent frontcourt duo, which is why the Grizzlies have been such a difficult postseason match-up in recent years and why they could be a tough out this year if they’re able to secure a playoff spot. They’re currently 40-28, which puts them in the eighth seed, but they’re only a half game above the Phoenix Suns.

Randolph has made it clear that he wants to return to Memphis, but it remains to be seen if the two sides will be able to ink a new agreement if he opts out this offseason.

Nets’ Top Priority is Re-signing Livingston [Billy] King said the [Nets] are making re-signing Shaun Livingston their top priority this summer. When asked why, he said it was because “he’s been pretty successful for us, helped us win games.”

King then said that “the market will set itself and then he has to go and make a decision on what’s best for him. Do you take a million more to go play and lose,” he asked. That’s likely going to be the decision Livingston is going to have to make this summer — the money or the system?

via Tom Lorenzo of NetsDaily.com

Brooklyn inked Livingston to a one-year, $1.2 million contract last summer and he has definitely outplayed it this season. This has been somewhat of a breakout year for the 28-year-old guard, who is averaging 8.0 points, 3.1 assists, 3.1 rebounds and 1.2 steals in 25.3 minutes for the Nets. He has been a key contributor for Brooklyn, starting 44 games and making his presence felt on both ends of the floor.

Livingston has only made $25,133,203 over the course of his nine-year career, a number that would be much higher if he wasn’t limited by serious injuries. Livingston is most known for the gruesome knee injury that he sustained as a member of the Los Angeles Clippers in 2008, which kept him from realizing his full potential. However, he has bounced back and put himself in a position where he’ll be coveted this summer. The Nets will certainly have some competition as they try to sign Livingston to a new contract, and it may be wise for Livingston to take a payday rather than giving Brooklyn a discount.

The guard hinted at this in a recent interview with the New York Daily News.

“[My enjoyment with Brooklyn and how I fit] definitely plays a factor,” Livingston said. “You have to weigh your situations, your options. The reason I’m in a situation where I can demand a contract is because I’m playing for this team, this coach, this system,” he said. “I realize that and I’m not over my head. But at the same time, it’s a business. You have to look at it like (the next contract) could always be your last. Especially me.”

I’ve talked to a few scouts who believe that Jabari Parker is leaning toward entering the 2014 draft. He’s apparently been looking into it.

To expand on my tweet from Friday, a number of scouts and executives have told me in recent weeks that Parker is leaning toward entering the 2014 NBA Draft. Parker and his camp have been doing their homework and weighing their options when it comes to the draft. One executive said that he believes there’s “a 90 percent chance” that Parker will be one-and-done. Parker and his family have said that no decision has been made, but that’s not the read that NBA decision-makers are getting.

Now that Duke has been eliminated from the 2014 NCAA Tournament, Parker can shift his attention to his future and what’s next. He’s currently being projected as a top-three pick in the draft, so it would probably be a mistake for him to return to school.

There are too many cautionary tales of players returning to school and then slipping in the draft, which cost them millions of dollars. Look no further than Jared Sullinger, who went from being projected as a top pick in 2011 to going 21st overall in 2012 after NBA doctors red-flagged him during the pre-draft process upon noticing he had a back issue. Had Sullinger been the first overall pick in 2011 (which was certainly possible), he would have made $4,286,900 in his first season and a total of $19,331,674 on his first contract. As the 21st pick, he made $1,089,100 in his first season and will make $5,305,350 total on his first contract. Perry Jones III and Willie Warren are other examples of players who returned to school only to have their draft stock take a significant hit.

The fact that Jahlil Okafor (a fellow Chicago native and Parker’s friend) is coming to Duke makes the decision a little tougher since the Blue Devils would be the favorite to win it all if Parker returned. However, there are many risks associated with returning to school and walking away from millions of dollars.