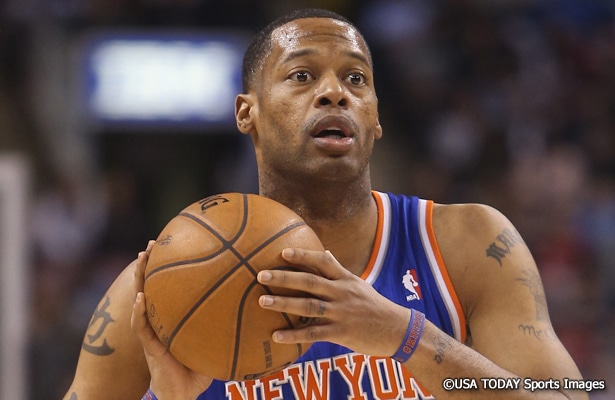 Free agent center Marcus Camby is progressing in his rehabilitation from foot surgery and expects to be fully healthy by February’s end to join an NBA team, a league source told RealGM.

Camby, who underwent surgery before the season for a torn plantar fascia, returned to on-court activities two weeks ago and has shown positive signs in his rehab. Teams must finalize postseason-eligible players by March 1.

Camby was waived by the Houston Rockets to ensure that the organization carried healthy players in the frontcourt, but he made clear a desire to heal the foot and further his 17-year NBA career.

It remains to be seen how effective Camby can be at this point in his career. The 39-year-old was limited in recent years, and that was before surgery to repair his a torn plantar fascia. Camby has a lot of wear and tear on his body after 17 years in the league.

Last season with the New York Knicks, Camby averaged 1.8 points and 3.3 rebounds over 24 games. His career averages are much better – 9.5 points, 9.8 rebounds and 2.4 blocks.

If the former Defensive Player of the Year is willing to workout for teams or play on a 10-day contract, that may help him get back into the league (like Kenyon Martin and Chris Andersen did). Teams are going to want to see him in action before committing guaranteed money to him.

With that said, teams are always on the lookout for big men, so it’s possible that Camby’s phone will ring once he’s healthy and ready to make his comeback.

Haslem stressed that he loves the game and the franchise as much as he ever has, even 11 years in. So he wanted to make one last thing clear, with a player option (for $4.8 million) coming after this season.

via Ethan Skolnick of Bleacher Report

This isn’t a big surprise, considering Haslem has been dedicated to the Miami HEAT for years. This is the franchise that signed Haslem after he went undrafted out of Florida and it’s the only team that he has played for over the course of his 11-year NBA career.

When Haslem landed in Miami, he was a big kid who was hoping to stick around in the NBA. Now, the 33-year-0ld is a three-time NBA champion, Miami’s all-time leading rebounder and an important veteran in the HEAT locker room.

Haslem was appreciative that LeBron James, Dwyane Wade and Chris Bosh took pay cuts to bring him to Miami and, as he said, it’s not like Haslem to walk away from the organization just because his minutes are down. He’s extremely loyal and that will be rewarded someday very soon. He will likely retire as a member of the HEAT and have his jersey hang from the rafters in Miami (as Skolnick predicted in the article).

This season, Haslem is averaging 2.7 points and 2.8 rebounds. He has appeared in 26 games, playing an average of 12.5 minutes.

NBA journeyman Jason Collins hasn’t found a team since announcing last April that he is gay.  Commissioner Adam Silver says the reason for his NBA unemployment has nothing to do with his sexual orientation.

“In terms of Jason not getting signed, based on everything I’ve been told, it’s a basketball decision,” Silver said. “Our teams want to win and Jason waited until the very tail end of his career to make that announcement.”

Collins’ name was brought back into the news Sunday night when Missouri defensive end Michael Sam publicly came out as gay.

“We want teams to make the best possible decisions from [a] basketball standpoint,” said Silver, who is in his 10th day on the job after replacing David Stern. “Ultimately, that’s what it’s all about. I’m sure Jason was never looking for a special favor or a special slot because he had publicly come out.”

via Darren Rovell of ESPN

Jason Collins’ story has resurfaced now that Michael Sam, a defensive end from Missouri, announced that he is gay during the NFL’s pre-draft process. The fact that Collins isn’t on a team was seen as a bad sign for Sam, as many people point to Collins’ announcement as the reason he’s no longer in the NBA.

However, as Commissioner Silver said, Collins was in the twilight of his career when he came out and may have been out of the league anyway, announcement or not.

After all, Collins is 35 years old and while he has been a strong veteran presence in recent years, he hasn’t been very productive. Throughout his career, Collins was a fringe player, with career averages of 3.6 points, 3.8 rebounds and 0.5 blocks. He averaged less than three points in each of the past seven seasons.

Collins showed great courage by coming out, but his NBA career may be over for reasons other than his sexual orientation. While it may be true that some teams don’t want Collins because of the potential media frenzy and distraction that his presence could cause, it’s more likely that Collins’ unemployment has more to do with his age and recent production.

As Silver noted, it’s possible that Collins could get a call once injuries start to mount. Teams always have a need for additional centers as the season goes on.