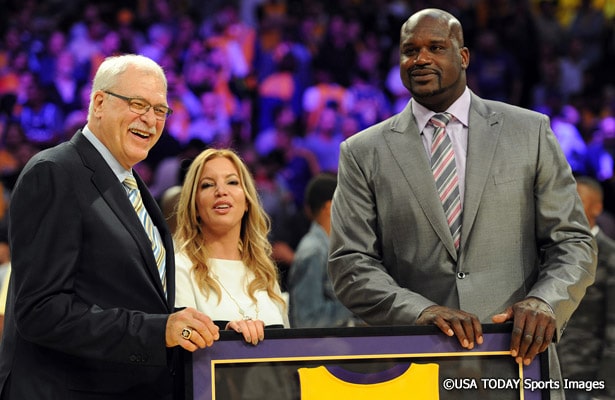 While a decision has not been made, Phil Jackson is leaning toward taking a front-office job with the New York Knicks, a source close to the team tells ESPN’s Stephen A. Smith.

Jackson’s role would be president of basketball operations, in complete control of all basketball-related matters, according to the source.

It is unclear whether the decision would include an agreement to coach the Knicks next season, the source said. A decision is expected sometime next week.

Via Stephen A. Smith of ESPN

With how horrific and disappointing this season has been for the Knicks to endure, bringing on Phil Jackson and giving him the keys to the ship is one of the few ways that they can help instantly improve their credibility.

The Knicks have a public relations problem on their hand as much as anything else. The outlook on the franchise is negative nationwide; with Jackson comes championship acumen and the public acknowledgement that they are not going the right direction or on the right path. It could also go a long ways in helping retain Carmelo Anthony, if that is indeed what Jackson would want them to do.

The only issue with Jackson is that he’s not going to come cheap; in fact, he’s probably going to be the highest paid executive in the league. If he’s a head coach as well, the price tag only increases. Also, Jackson has never served as the head of a front office. The Knicks would be banking on his coaching ability translating to being an executive. At this point, though, it’s a risk they almost have to take if he is willing.

The Detroit Pistons and Cleveland Cavaliers are also rumored to be interested in hiring on Jackson in an executive role. It’s going to be interesting to see how his marriage with Lakers owner Jeanie Buss factors into his decision. She wanted him to replace Mike Brown as head coach last year, but the Lakers ultimately signed Mike D’Antoni instead. The Lakers have floundered under his guidance, but a reunion with the Lakers, at this time at least, seems more unlikely than any of the other possible landing spots for Jackson.

“I have seen him play live a limited number of times, but I have to say that he’s really intriguing. He has a legitimate chance to go No. 1 in this draft. He’s that good. His upside is enormous. I won’t be surprised if he goes No. 1 on draft night. If we land the No. 1 pick, he’s a guy who we’re seriously going to look at.

The scout went on to compare Exum to Anfernee Hardaway and list concerns about both Andrew Wiggins and Joel Embiid – the two prospects who are mentioned most often as the potential top overall pick in the 2014 NBA Draft.

Exum has this aura of mystery right now as his body of work is nowhere near as sizable as any prospect, both domestic and international. Every time he has played under a big spotlight, though, he’s excelled and looked every bit like a player who should be considered as a top overall pick.

Exum has made it clear that he wants to play for a team that has the opening for him to play a significant role as a rookie. The Los Angeles Lakers are amongst the teams said to be most interested in him. He is represented by Rob Pelinka, the same agent as Lakers star Kobe Bryant.

Carmelo Anthony scored 29 points on Friday night but his biggest shot was directed at a report that said Joakim Noah was trying to recruit him to the Bulls.

“No, not at all,” Anthony said when asked if there was any truth to the story after Friday’s 108-81 win against the Utah Jazz. “I can’t have that conversation.”

Via Mitch Abramson of the New York Daily News

Noah has also come out publically and denied this rumored meeting that had the NBA world abuzz earlier this week. It’s not surprising at all; if the meeting did happen, the two would never admit to it – at least not unless Anthony joined the Bulls this offseason. However, the fact that they are only going to be in a position to offer him around $16 million without giving up pieces of major significance really works against them.

ESPN recently put out a piece reporting that Anthony could stand to gain the most by simply opting into his contract and becoming a free agent next offseason instead. Unfortunately for the Knicks, up to this point Anthony has given every indication that he’s set on exploring free agency.