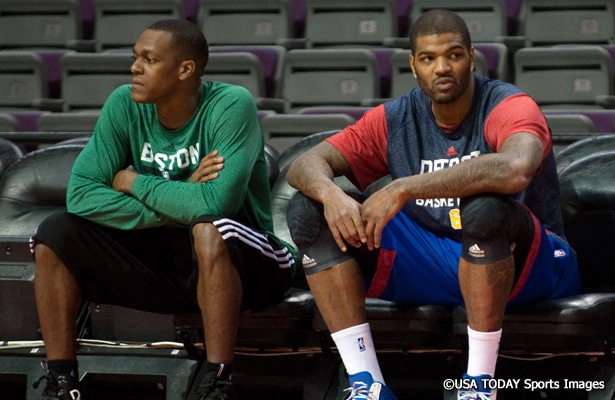 J-Smith and Rondo dream about playing together. Smith: “We tell each other (how) surreal that would be, for us to be able to reconnect again

It’s well documented that the Detroit Pistons have tried to acquire Rondo from the Boston Celtics, which would reunite Smith and Rondo.

When Smith was a free agent, he likely would’ve been interested in teaming up with Rondo in Boston, but the Celtics were in the midst of transition as they entered rebuilding.

It’s possible that the Celtics could trade Rondo to the Pistons, but Boston was reportedly asking for Andre Drummond in the past, which is a conversation ender for Detroit. Even though Detroit inked Brandon Jennings this past summer, reports have suggested that the Pistons would still be interested in Rondo as they view him as a significant upgrade.

Even if Boston holds onto their point guard until his contract expires, a Rondo-Smith reunion could be possible after next season, when Rondo will become an unrestricted free agent. During that summer, the Pistons will have only $21,844,497 in guaranteed commitments.

Rondo and Smith were teammates back in high school, starring for Oak Hill Academy.

Bynum May Play for Pacers on Friday

Andrew Bynum could make his debut with the Indiana Pacers soon.

On Sunday, Bynum said that he hopes to be “cleared to play next week,” believing that he could be on the floor by Friday, March 14 when the Pacers play in Philadelphia. Pacers coach Frank Vogel said the team planned to re-evaluate Bynum after the road trip.

“We’ll see after (Sunday’s) game goes and then we’ll probably meet about it (Monday),” Vogel said, “and try to come up with a firmer plan.”

via Candace Buckner of IndyStar.com

The Pacers aren’t going to rely heavily on Andrew Bynum since they have one of the deepest frontcourts in the league (Roy Hibbert, David West, Luis Scola, Lavoy Allen, Ian Mahinmi), but adding the former All-Star can only help them. As long as he’s healthy and buying in, Bynum can be a real threat.

While the Pacers want to get Bynum on the court so that he can start getting acclimated, they also want to preserve him for the playoffs. Indiana will most likely be going on a deep postseason run, and ensuring that Bynum is available for that stretch should be the priority. Bynum could be a significant contributor in the playoffs, especially against a small Miami HEAT team that seems to be on a collision course with the Pacers.

Bynum had some strong games earlier this season when he was appearing for the Cavaliers, so it’s realistic to think that he could be a difference maker for Indiana as a reserve.

Nerlens Noel would like to make his 76ers debut in his hometown of Boston on April 4, according to sources.  They confirmed that’s why the rookie center tweeted “4-4-14”  in reference to April 4, 2014 on Sunday afternoon.

The Sixers (15-47) play at TD Bank that evening against the Boston Celtics.

The sources said this is just a wish that he had not disclosed to the Sixers as of Sunday afternoon.

via Keith Pompey of The Philadelphia Inquirer

Earlier this season, Sixers head coach Brett Brown indicated that Noel may not play for the remainder of the year. However, that was months ago, and it’s possible that things changed.

Noel has always left open the possibility of playing this season when asked. He apparently wants to make his debut on April 4 because he’d be playing in his hometown of Boston. April 4 is more than realistic as a return date for Noel, who has been on the slow end of the spectrum when it comes to his recovery (which is according to Philly’s tanking plan).

Noel has yet to appear in an NBA game, and hasn’t taken the court at all since February of 2013 when he  tore the anterior cruciate ligament in his left knee on a freak play in transition. Philadelphia is currently 15-47 and the top priority there seems to be assembling the most ping pong balls before the draft.