Home » news » Nba Rumors Sixers Have Wiggins Atop Board 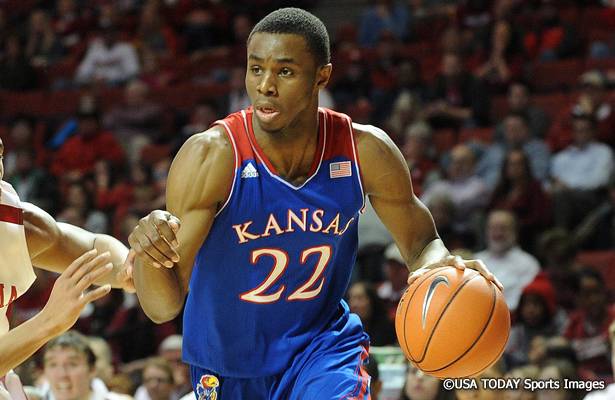 Sixers Have Wiggins Atop Draft Board

In the midst of a 20-game losing streak, the Sixers have had Wiggins atop their board all year and believe he’d be the perfect complement to Michael Carter-Williams, Nerlens Noel and Thaddeus Young. The athleticism on that team would be crazy.

Parker is another option, as is Kentucky’s Julius Randle (the Sixers could use someone who can draw a double-team down low). They also likely will have the Pelicans’ pick (it’s top-5 protected) and look to add a big or shooter to the team.

via Chad Ford of ESPN

It makes sense that the Sixers would have Andrew Wiggins rated as the top draft prospect on their big board, because a nucleus of Wiggins, Michael Carter-Williams, Nerlens Noel and Thaddeus Young would be incredible. Philadelphia could be scary good in several years if that core reached their full potential, and the Sixers would have to be considered one of the better up-and-coming teams in the league.

The Bucks currently have a worse record than Philadelphia, but that may change if the Sixers continue to lose. They have now dropped 21 straight games, which is just five shy of the NBA record held by the 2010-11 Cleveland Cavaliers. Every loss during their streak has been by a margin of five or more points, which is an NBA record.

There’s no guarantee that the Sixers will land the top pick, but they still may be able to snag Wiggins if they don’t win the lottery. Another player such as Joel Embiid (assuming his health isn’t an issue) or Dante Exum could end up going first overall, which would allow Philly to land their guy with the No. 2 pick. Or, if Wiggins isn’t there, it sounds like the Sixers will seriously consider Jabari Parker, who would also look excellent alongside Carter-Williams, Noel and Young.

As Ford mentions, Philadelphia will also likely get the Pelicans’ lottery pick, so this will certainly be a franchise-changing draft for them. It’s been an awful season for the 76ers, but Sam Hinkie seems to know what he’s doing and it’s for the good of the team long-term. If the Sixers can come away from draft night with Wiggins or Parker, as well as another top-tier prospect like Doug McDermott, Willie Cauley-Stein or Gary Harris with the New Orleans pick, the team will be in great shape going forward.

He explained Dirk’s leadership, character, and ability set a tone for the franchise, and he’s right on the money. And unlike some big-name aging stars, Nowitzki was willing to take a paycut to allow the Mavericks more chances at contention.

via Matt Moore of CBSSports.com

At the MIT Sloan Sports Analytics Conference recently, Rockets GM Daryl Morey shared a funny story from. Over the summer, when Morey saw that the Warriors had acquired Andre Iguodala, he thought that they were going to land Dwight Howard in a sign-and-trade with the Lakers.

Thinking that he had missed out on Howard, he called Mavericks owner Mark Cuban and asked if Dallas would trade Dirk Nowitzki. Cuban didn’t even consider it, which isn’t a surprise considering he’s never shown interest in moving his future Hall of Famer.

Now, Cuban says that trading Nowitzki is “never going to happen.” Nowitzki has spent his entire career with the Mavericks since being acquired by the team on the night of the 1998 NBA Draft, and it’s clear that Cuban understands the importance of continuity and having a positive culture.

Nowitzki will be an unrestricted free agent after this season, so it’s possible that he could end up joining another team. However, that’s unlikely. It seems he wants to finish his career with the Mavericks rather than jumping ship. While going elsewhere would likely give him a better chance at winning a second ring before he retires, Nowitzki is just as loyal as Cuban and the smart money says that their marriage will continue.

Nowitzki has said that he wants to play for two or three more years, so this will likely be his final contract.

Carmelo Anthony said he is willing to make changes to his game if Phil Jackson believes the prolific scorer has to do so to win an NBA title.

Anthony, who is a pending free agent, said the Knicks’ big picture “is definitely more attractive” with Jackson’s arrival.

“What I’ve been able to do these past 10-11 years has gotten me at where I am right now,” Anthony continued. “If Phil wants to come in and change that this late in my career, if it’s going to help me win a championship, I’m with it.”

“As far as knowing what it takes to win, Phil is the best to ever do it,” Anthony said. “So for me to be able to have the opportunity and have him by my side, for him to teach me, you know, because I’m still willing to learn the game of basketball.

“And I haven’t won anything [and] he’s won a lot. I can learn a lot from him and his system, things that he wants to incorporate here. I’m hoping and praying this all works.”

via Ohm Youngmisuk of ESPNNewYork.com

This is absolutely the right mindset for Anthony to have at this point in his career, and it’s good to hear for the Knicks.

Anthony is 29 years old and clearly wants to compete for a championship. He has watched his friends LeBron James, Carmelo Anthony and Chris Bosh win multiple titles in Miami, and it seems he’s willing to do whatever it takes to hoist the Larry O’Brien trophy as well.

It sounds like he’s excited about the arrival of Jackson, and open to learning from the 13-time champion. Anthony will opt out this summer and become an unrestricted free agent, but he has indicated that his preference is to re-sign with the Knicks and finish his career in New York.

Hiring Jackson shows that the Knicks are serious about building a contender around Anthony and winning, which should help their odds of re-signing him. The next step would be getting the perennial All-Star to buy in to the new direction of the franchise and allowing Jackson to put his mark on the team, and it sounds like Anthony is completely open to that.