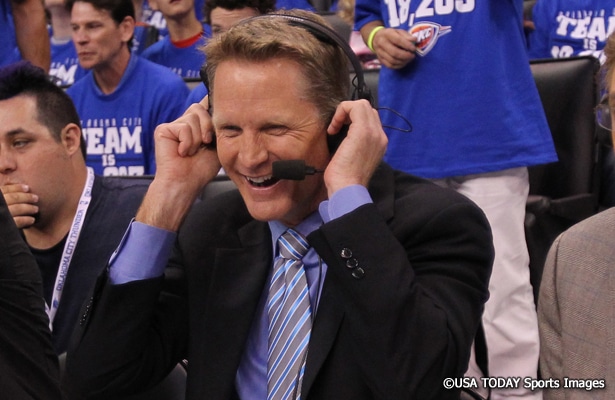 Could Kerr Be Next Coach of Knicks?

If – that’s if – Phil Jackson runs the Knicks don’t rule out the team’s next coach being…Steve Kerr.

A current NBA coach says that Steve Kerr wants to coach and that “he’ll be really good. He’s smart and he’s a good leader.”

With Phil Jackson in talks to potentially run basketball operations for the New York Knicks, plenty of rumors like this one will pop up.

After this dreadful season, Mike Woodson is clearly on the hot seat and Jackson (or any incoming executive, for that matter) would likely want to bring in their own head coach.

Kerr played for Jackson for several years on the Chicago Bulls and the two men remain close. Kerr is currently working as a broadcaster, but he was the general manager of the Phoenix Suns from 2007 to 2010 so he does have some experience working in an NBA organization.

In the past, Brian Shaw was often linked to Jackson as a coach he’d be interested in hiring should he take over a front office, but now that Shaw is the head coach of the Denver Nuggets, Jackson would have to find someone else. Kerr is certainly a possibility.

White Works Out for Warriors

White last played in the NBA last season, appearing in 12 games for the Boston Celtics. He is a five-year NBA veteran, who has also had stints with the Charlotte Bobcats and Oklahoma City Thunder, as Spears mentioned. White’s career averages are 6.0 points and 3.2 rebounds per game.

After being waived by the Chicago Bulls in training camp this year, White signed with the Sichuan Blue Whales of the Chinese Basketball Association. He spent the year in China, averaging 20.2 points and 8.5 rebounds while leading the team to a 14-20 record.

The Warriors are looking to bolster their frontcourt, which is why they are interested in White. Other teams may also express interest in the 27-year-old before the end of the season.

The Sugar Land Skeeters have invited the 34-year-old McGrady to spring training, giving him a chance to earn a spot on the independent Atlantic League team.

A seven-time NBA All-Star, McGrady has been training to become a pitcher with the team.

“We’re intrigued by the progress Tracy has made thus far and really commend him for putting in the work,” Skeeters manager Gary Gaetti said.

McGrady was a talented baseball player as a child, but he gave up the sport as a senior in high school so that he could devote all of his time to basketball.

The seven-time NBA All-Star retired from the NBA over the offseason, and started training for his stint as an independent league pitcher.

The 34-year-old will audition for a roster spot during spring training. With his 6’8 frame and 7’2 wingspan, McGrady could pose some problems for opposing teams as a pitcher.

The Skeeters are no stranger to bringing in big name players. Roger Clemons had a stint pinching with Sugar Land several years ago.