The Milwaukee Bucks may have had a disappointing season thus far, but there are a lot of reasons to be excited about the team’s future. Perhaps the biggest source of this excitement is Giannis Antetokounmpo and the way his game has evolved over the last few weeks.

Ever since All-Star Weekend, Antetokounmpo has taken his game to another level. In his last 11 games, Antetokounmpo is averaging 19.5 points, 10 rebounds, 7.6 assists, 1.9 steals and 1.8 blocks per game, while shooting 48.2 percent from the field.

On February 22, against the Los Angeles Lakers, Antetokounmpo registered his first triple-double of the season, contributing 27 points, 12 rebounds, 10 assists, three steals and four blocks in 42 minutes of action. Since that game, Antetokounmpo has put together two more triple-double performances and now, in less than two weeks, is tied with Hassan Whiteside for third in triple-doubles this season. 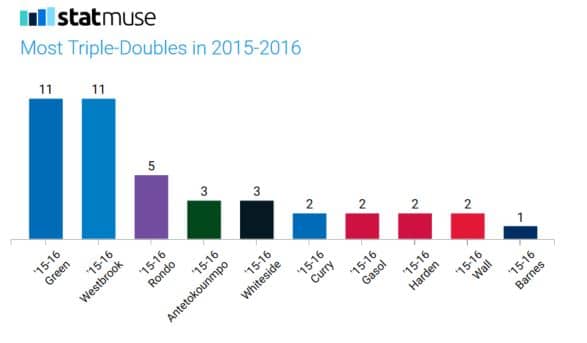 After the game, Kobe Bryant spoke to Antetokounmpo and advised him on how to become the great player he is capable of being.

“I said, ‘Listen, that’s just a choice you’re going to have to make,’” Bryant said. “‘If you want to be that great player you have to make certain sacrifices and you’ve got to go after it.’ He has the physical tools, the intelligence. Now it’s just a matter of him believing in himself and going after it. He has the talent to be a great player.”

More significant than the fact that Antetokounmpo is putting up huge stat lines is the fact that he is doing it out of position. He has recently taken over as the de facto point guard for the Bucks after Michael Carter-Williams was lost for the season to a hip injury.

We’ve seen Antetokounmpo attempt to play point guard before. Bucks head coach Jason Kidd experimented with the idea in the 2014 Las Vegas Summer League. The results were mixed at best and we didn’t hear much about the idea of using Antetokounmpo as a point guard much since that time. Now, it seems as though those plans are back in action.

“We’re not calling him the point guard, but he’s dictating the offense and he’s doing quite well with it,” Kidd said. “He wants that. He has the skillset to do that. He has the IQ to do it and he’s doing it well. Being consistent with that at 6’11 causes a problem. And you look at some of the passes that he’s able to throw from half court, a bounce-pass to Jabari [Parker] on the run. Those are things that you can’t teach and he has it in him and he’s displayed it.

“The ball is moving, our pace is up, all the stats are up. [Giannis’] skillset is like no other. He has the ability to put it on the floor, he’s working hard on his jump shot, he can post up, he can pass. Giannis is just going through the process, understanding things don’t happen overnight.”

Kidd is right that Antetokounmpo’s skillset is like no other. He is so long and athletic that he can get the ball up the court in as few as three dribbles. His ball-handling has improved significantly since he entered the NBA and he is now able to keep opponents off balance both in transition and in the half court. And now Antetokounmpo is throwing accurate passes all over the court in a wide variety of circumstances, including in transition, cross-court, from the post and in the pick-and-roll. Antetokounmpo still isn’t a pure point guard, but what we’ve seen out of the 21-year-old recently is very exciting.

In these clips, we see how effective Antetokounmpo can be facilitating the Bucks’ offense with his back to the basket.

Antetokounmpo is displaying great patience in the post, waiting for teams to double him so that he can launch a pass to an open teammate. Teams are consistently sending double-teams, underestimating Antetokounmpo’s ability to find and hit the open man. Antetokounmpo isn’t exactly a dominant scorer in the post, so teams may eventually stop cheating on him and force him to be more of a scorer than facilitator with his back to the basket.

But even if opponents take away Antetokounmpo’s ability to facilitate out of the post, there’s almost nothing they can do about his play-making in transition. At 6’11, with a long stride and strong handle, Antetokounmpo is able to jet past his opponents and draw numerous defenders, leading to easy buckets for teammates that are leaking out and running the court.

Not every assist that Antetokounmpo racks up is the product of any heightened point guard skills. There have been times where he makes a simple pass to a player like Jabari Parker or Khris Middleton, who proceed to make a nice play off the dribble to score. Reviewing Antetokounmpo’s recent run as the Bucks’ de facto point guard was a good reminder that there is a lot of liberty taken in determining what constitutes an assist. There were several plays in which a teammate scored after taking more than one or two dribbles, which seemed to be far outside of what would generally be considered an assist. However, even with those liberties, Antetokounmpo has still racked up an impressive number of legitimate assists in these recent games.

Part of the reason for that is Antetokounmpo is pushing the pace and doing most of his damage in transition. Another reason is the Bucks’ inability to space the court, which is allowing opposing defenses to stay compact and muck up Milwaukee’s pick-and-roll attempts. However, Antetokounmpo is showing that in limited circumstances, he can operate as the pick-and-roll ball-handler, and he should only get better with more time and experience (and hopefully with better shooters and screen-setting big men around him in the future).

The Bucks still have a lot of issues to figure out. They need to determine what to do with Carter-Williams in the long-term. Carter-Williams’ inability to shoot with any sort of consistency or range is a major problem and limits him to being a Shaun Livingston type of guard. Livingston also can’t shoot with any sort of range, but his length, defensive effort and ability to facilitate an offense make him a very nice backup point guard for any team. If Carter-Williams is set to be that sort of guard, the Bucks need to figure out who will be the long-term starting point guard and to what extent Antetokounmpo will act as the de facto point guard.

Antetokounmpo arguably allows Milwaukee to use Carter-Williams as the starting point guard, but off the ball for long stretches. But that perpetuates one of the Bucks’ biggest problems: they lack shooters and are incapable of spreading out opposing defenses consistently. Antetokounmpo’s development has helped to offset that in this recent run, especially with the rapidly developing chemistry between him and Jabari Parker. Still, this team needs more shooting and needs to figure out how much it can rely on Antetokounmpo to be its leading playmaker. And Antetokounmpo needs to add consistency to his jumper and stretch his range to the three-point line. Right now he is getting by despite not having a jumper, but once he adds that to his arsenal, it’s hard to imagine how defenses will slow him down.

Antetokounmpo’s recent play doesn’t solve all of the Bucks’ structural problems, but it sure does provide excitement and hope for what sort of player he can be and what sort of team Milwaukee can be in the future.