Earlier this week, Michael Kidd-Gilchrist signed a four-year, $52 million contract extension with the Charlotte Hornets. Drafted second overall in the 2012 NBA Draft, Kidd-Gilchrist was eligible for a rookie extension prior to the start of the 2015-16 season. By agreeing to this extension, Kidd-Gilchrist is passing on becoming a restricted free agent next offseason, where he could have potentially landed a max offer sheet in the range of four-years, $90 million.

There are many who will argue that $52 million over four years is plenty of money for a small forward that has missed 47 games over the last two seasons, averaged just 10.9 points, 7.6 rebounds and 1.4 assists per game and did not attempt a single three-pointer last season. But as new methods of evaluating player performance are developed, we are better able to assess how much a player is worth based on his actual impact on winning games, rather than just box score numbers.

While Kidd-Gilchrist may not put up impressive box score stats, anyone that has paid attention to the Charlotte Hornets the last few seasons knows just how important he is to his team’s success. Over the last two seasons, Charlotte has gone 62-55 with Kidd-Gilchrist in the lineup and 14-33 without him. Charlotte head coach Steve Clifford and point guard Kemba Walker touched on this point after Kidd-Gilchrist agreed to the extension.

“When he’s on the floor, we play well; when he’s not on the floor, we don’t. … As much as anybody that we have had in the two years I’ve been here, he’s been the guy that we can’t play well without for any long period of time,” Clifford said.

“His motor is different,” Walker said. “The type of player he is, you have to have him on the court. We need him on the court every single night. When he’s out there, your chance of winning is definitely higher — definitely.”

It should be noted that each of these players’ on/off court numbers are affected by the quality of their teammates, along with several other factors, but it’s clear that the Hornets are a much better team with Kidd-Gilchrist on the court. This is true despite the fact that Kidd-Gilchrist is a below league-average player on offense (-0.82 Offensive Real Plus-Minus). It’s no secret that Kidd-Gilchrist had terrible shooting mechanics coming out of college, which got even worse with some tinkering. However, Kidd-Gilchrist has been rebuilding his shot with Mark Price for some time now, and the results are encouraging. His mechanics are more fluid, he is a more confident shooter and his percentages are on the rise. 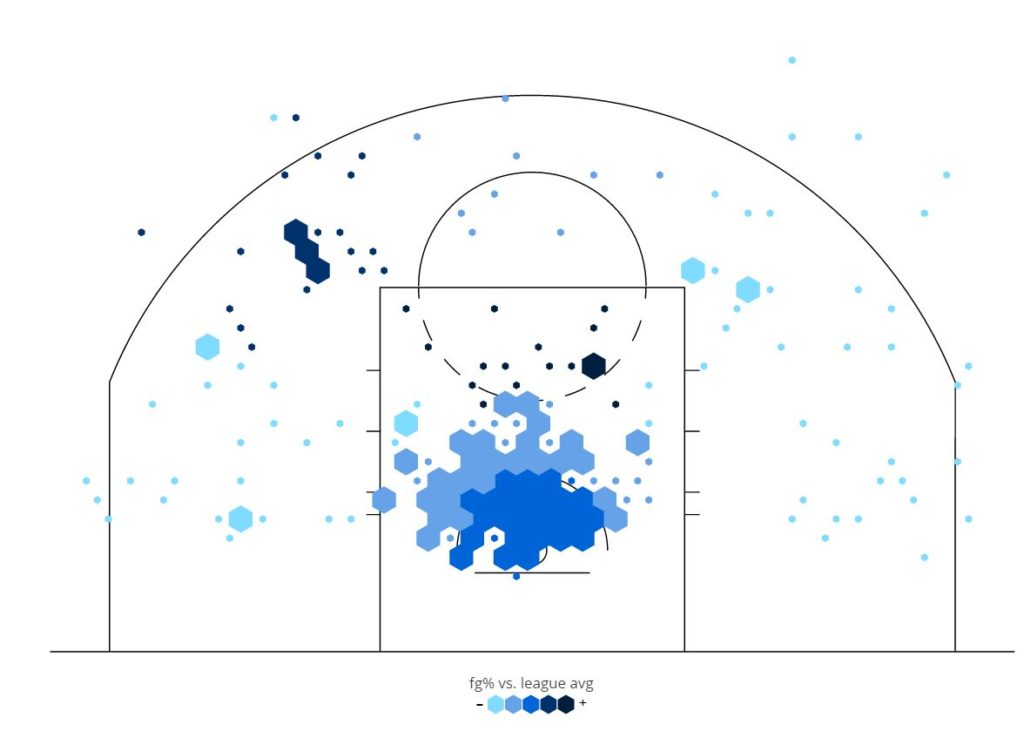 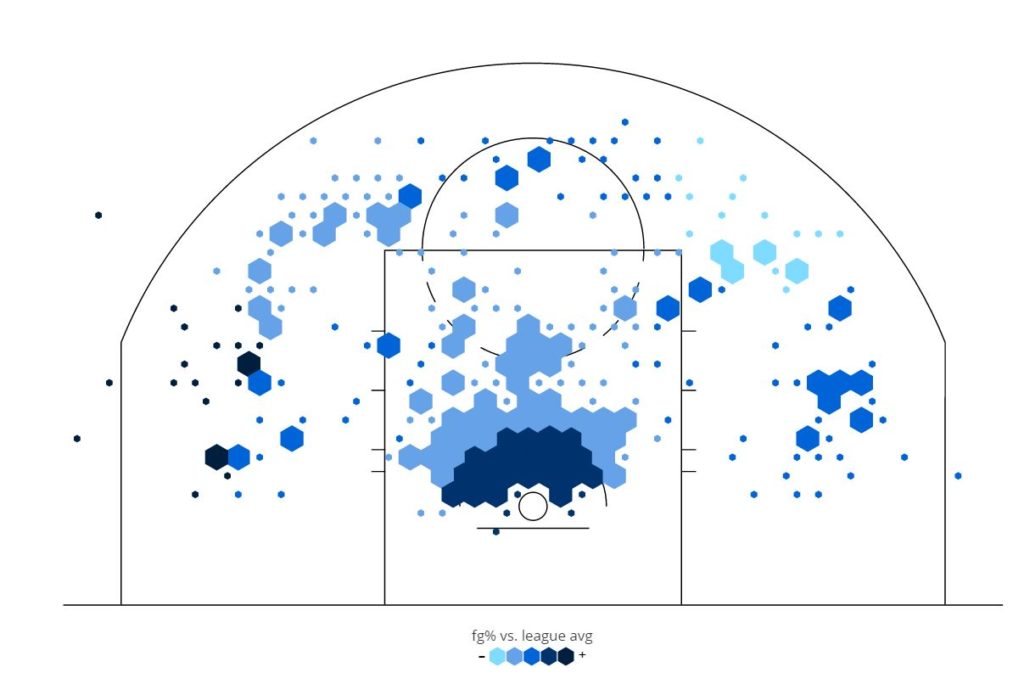 While Kidd-Gilchrist is still a work in progress, we should remember that he’s just 21 years old. Adding three-point range is the next natural step for him, which will probably take a few seasons. However, Kidd-Gilchrist has already found other ways to contribute on offense, including timely cuts to the rim (75th percentile), scoring in transition and beating his defenders off the dribble, which is why he is still a net positive on offense for the Hornets.

Though he is a positive factor on offense, despite his limitations, Kidd-Gilchrist’s real value comes from his defensive impact. Last season, the Charlotte Hornets ranked ninth in defensive efficiency, giving up just 101 points per 100 possessions. However, when he missed 12 games during November and December, the Hornets gave up 109.7 points per 100 possessions, which would have been the worst rating in the league over the course of the entire season (just edging out the Minnesota Timberwolves). And when he missed the last 11 games of the season, the Hornets gave up 105.5 points per 100 possessions, a mark which is tied with the Denver Nuggets’ 26th ranked defense. Furthermore, Kidd-Gilchrist ranks fourth among all qualified small forward in Defensive Real Plus-Minus (3.63), behind only Draymond Green, Tony Allen and Kawhi Leonard (last season’s Defensive Player of the Year).

Kidd-Gilchrist is a long, athletic and motivated defensive-wing. It should be no surprise that he has this much of an impact on defense, especially considering the fact that Kidd-Gilchrist said he wants to be the best defender in league history.

“I want to say ever; not just in the league (now). The best defender this league has seen,” Kidd-Gilchrist told the Charlotte Observer.

“I don’t like getting scored on. I take it personally,” Kidd-Gilchrist said.

With all of this in mind, the question isn’t whether Kidd-Gilchrist is worth this extension, but why didn’t he hold out for a better offer or test his market as a restricted free agent? Consider that other wing-players recently cashed in big deals that are either on par with, or in excess of Kidd-Gilchrist’s deal:

Guys like Leonard and Butler are top-20 players in the league (if not higher) and are deserving of their big contracts. Khris Middleton is an advanced statistics darling that doesn’t put up huge box score numbers, but makes the Milwaukee Bucks a much better team, much in the same way Kidd-Gilchrist does for the Hornets. And while Harris and Carrol are both good players, Harris only plays one side of the court at this point and Carroll is already 29 years old. While Kidd-Gilchrist is not a perfect player, he is young, improving and already one of the best defenders in the league. Had Kidd-Gilchrist waited until next summer, he would be entering a weak free agent class with an inflated salary cap and could have potentially signed an offer sheet in the range of $90 million (assuming he plays well this upcoming season, shows more improvement and stays healthy).

There is something to be said for the security that comes along with signing a deal now rather than waiting and risking injury. And it’s almost unfair to criticize a player for not holding out for more money when players are so often criticized for not taking less money to help their respective teams add more talent (just as Kobe Bryant). But it seems that in this case, Kidd-Gilchrist seriously undervalued himself and his importance to the Hornets. The benefit is that the Hornets have a very talented 21-year-old locked in on a very reasonable deal, which will allow them to spend their money elsewhere to add more talent. So while there are questions as to why he may have decided to sign for less than he is probably worth, we should also appreciate a player that doesn’t put his sole focus on money, which seems to be case for Kidd-Gilchrist.

“Why wait? I’m learning from the best,” Kidd-Gilchrist said, referring to playing for owner Michael Jordan, Clifford and assistant coach Patrick Ewing. “I don’t do this for the money.”

Reasonable people can debate whether Kidd-Gilchrist should have bet on himself the way Jimmy Butler did last summer. But don’t be surprised if in a few seasons, we consider Kidd-Gilchrist’s deal to be one of the best values in the NBA.