For the past five years, it is LeBron James who has had a monopoly on the NBA Finals—at least from the Eastern Conference’s perspective.

And truly, the only players who consistently showed an ability to push him to his limits were a pair of Pauls—Paul Pierce and Paul George.

Amazingly, as we peruse the roster that the Indiana Pacers will trod out this coming season, only three players remain from the team that we saw take the HEAT to six games in the 2014 Eastern Conference Finals. That was the second consecutive season that the Pacers did battle with the HEAT for the right to represent the Eastern Conference in the NBA Finals, and it was a year where Paul George proved himself, beyond a shadow of a doubt, to be worthy of mention amongst the NBA’s superstars.

What a difference a few years makes.

As we count down toward the commencement of the 2015-16 season, George is joined by Chris Bosh as the two players in the conference who may hold the fate of the pecking order in their hands. After missing 76 games last season, George is ready to attempt to lead the Pacers back to the playoffs, and eventually, much further.

Still, like Kevin Durant’s 2012 Western Conference Champion Oklahoma City Thunder, the Pacers are a reminder to us all: nothing is promised in the NBA.

Back in 2013, when it took the HEAT all of seven games to topple George and his running mates, the basketball universe became convinced that the Pacers would be contenders for years. The following year, when the HEAT took them out in six games, we still had every reason to believe that the Pacers would eventually find their way, especially since they increased their win total from 49 to 56 from one year to the other.

Yet, suddenly, it seems, as George returns to action, he will look around and no longer see Roy Hibbert, David West or Lance Stephenson. Danny Granger is long gone, as are Evan Turner, C.J. Watson, Luis Scola, Donald Sloan and other players whom Pacers management was hopeful could help to push the team over the top.

Instead, it is only Lavoy Allen, George Hill, Solomon Hill and Ian Mahinmi that George will recognize.

The question now is whether or not, in the long run, the Pacers will be better for it.

In the NBA, you either want to be good enough to have a shot at winning the championship or bad enough to have the opportunity to draft a player who can help you win a championship. Over the years, we have seen quite a few teams spend years between those two extremes and ultimately have nothing to show for the extended time wallowing in mediocrity. Conversely, we recently saw Danny Ainge secure a truckload of draft picks in return for proactively and perhaps prematurely opting for a rebuilding project. Paul Pierce, Kevin Garnett, Jason Terry, Jeff Green and Rajon Rondo were all dealt for future pieces, and it all seemed to happen so abruptly.

Now, the Pacers are set to travel that same journey.

At just 25 years old, assuming Paul George can regain his pre-injury form, he could easily be regarded as a top ten player in the league once again. With West and Hibbert moving on, the Pacers will surround 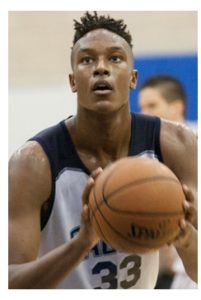 him with a supporting cast that may be less experienced, but, in theory, younger and hungry.

In Monta Ellis, the Pacers are pairing George with a player who is not only supremely underrated, but also perhaps the most talented that George has played with. The hope for the franchisee is that rookie Myles Turner—whom the franchise selected with the 11th overall pick in the 2015 draft—can eventually emerge as a cornerstone player.

During the pre-draft process, Turner impressed everyone with his timings and instincts. He also seemed to earn the reputation as being a plus-defender, despite what some believe is a lack of mobility. Some out there believe that Turner may eventually join Justise Winslow as being one of the steals of the 2015 draft, and although we will not go so far as to make that declaration, we do think it safe to say that with Ellis and Turner by his side, Paul George will have an opportunity to help lead the Pacers back to respectability.

Still, how far this team goes will depend on whether and how quickly George can revert to his pre-injury form.

It wasn’t all that long ago that the Indiana Pacers were humming along. Back in December 2013, behind the quiet, firm, wise leadership of David West, the Pacers raced out to a 20-3 record and put everyone in the NBA on notice. They mostly did so behind the spirited play of Paul George. George is one of the few players in today’s NBA that impacts the game, equally, on both ends of the floor. There simply are not many players out there—not Kevin Durant, not Stephen Curry and not Carmelo Anthony—that can be counted on to not only shut down the opposition’s top offensive option, but to do so while still giving his team plus-contributions on the other end of the floor.

In that regard, George has already proven to us, even with a small sample size, that he is capable of doing that. It is that gift and that ability to be effective that separates the stars from the superstars. It is that which separates the LeBron James from the Kevin Durants.

George’s ascension was perhaps delayed by his sharing the floor and splitting minutes with and yielding usage to Danny Granger, but with Granger’s injuries woes and George moving to small forward, it was during the 2012-13 season that he became a household name. Back-to-back selections as an Eastern Conference All-Star and a mighty progression that occurred in those two seasons, George tantalized us all with his busting potential. Given the opportunity out of necessity, he certainly proved himself capable of being the top dog on a championship contender, even if he was somewhat exposed in each of the two deep playoff runs on which he led his Pacers.

What we learned of George in both the 2013 and 2014 Eastern Conference Finals was that, although he was fully capable of being “that guy”—the guy that could challenge the likes of Derrick Rose and LeBron James for conference supremacy—he was not ready to be that guy every single day. At least, he was not ready at that time.

That is why the leg injury that George suffered while playing an exhibition for Team USA in Las Vegas during the Summer of 2014 was so disheartening. Before our very eyes, he was putting together all of the tools and talents at his disposal and becoming a player that many believed was a Most Valuable Player in the making.

Then, suddenly, it all came crumbling down.

Shortly thereafter, the other pieces of the team that surprisingly became a contender in the Eastern Conference began to find themselves elsewhere.

Together, we will have the opportunity to see if what we witnessed over those two years was the beginning of what will be a majestic rise, or if it was a mirage. It may have been a flash of brilliance never again to be witnessed. After all, leg injuries do sometimes have effects that linger on forever.

Either way, with the Eastern Conference improving, George returning and the hope that he will make a full recovery, the Pacers will certainly be a team worth watching this coming season.

And with good fortune, they will again emerge as a team worth watching in the playoffs.