It felt like an eternity. The tension suffocated the masses in Brooklyn’s Barclays Center. Collective silence. Focused discernment.

Could the Los Angeles Lakers truly cut against the grain and pass on Duke’s Jahlil Okafor with the second overall pick in the 2015 NBA Draft? Were the reports true in that Mitch Kupchak had fallen in love with the southpaw from Ohio State University?

With his heart racing and his mouth dry, Russell never anticipated being so nervous on draft night. Finally, though, the moment had come; it was time to make the walk from the green room to being a franchise cornerstone for arguably the most storied franchise in NBA history.

For the first time since 1982, after coming off of their worst season in franchise history, the Lakers owned a top five pick in the NBA Draft.

Now, they owned Russell, too.

It took Russell 72 seconds to make his way from the green room up to the stage. Along the way, he stopped and greeted many of the faces that had become familiar to him. And after he greeted commissioner Silver on stage. They embraced briefly before Russell looked up into the heavens and pointed a finger into the sky.

Finally, he had made it.

Now, after the flight of Dwight Howard and the refusal of Carmelo Anthony, with the attrition of Kobe Bryant and the failure of the front office, all eyes are firmly on D’Angelo Russell.

He has entered a situation wherein he will deal with tremendous scrutiny and face substantial pressure.

And you know what they say about pressure… it busts pipes….

But it also creates diamonds.

The first time I met D’Angelo Russell was during the NBA’s Draft Combine in Chicago. I’d heard a lot about the star point guard from Ohio State University and had seem some of his finer work on the basketball court. Certainly, he possessed the skills necessary to succeed at the NBA level, but his psyche and his mental makeup were more important than his physical attributes, because success at the highest level depends just as much on how a player thinks and responds emotionally as it does on whether he can thread the needle on a pick-and-roll or nail an open 15-foot jumper.

“I’m the best player in the draft,” Russell said when asked why he should be picked.

“It’s a blessing to be in the position I’m in right now,” he said. So it was no coincidence that in his life changing moment on draft night, he stared up into the heavens and said “Thank god, man.”

In Chicago, what Russell revealed about himself, to me, was that he was reserved, calculated and honest. The questions he was asked and the answers he provided were true, well-thought and at-ease. His demeanor and candor both gave the impression of a player who was comfortable in the spotlight, comfortable being put under the microscope and unafraid of facing the criticism that may await him.

And it certainly didn’t take long for the criticism to come.

Russell made national headlines after declaring himself as being the top player in the draft, and frankly, it surprised him. What it was, for him, was a lesson as to what life would be like in the National Basketball Association—especially in Los Angeles.

In New York City, on the day before the draft, Russell had come a long way over the course of the prior six weeks, but despite the journey, he retained the same calm, cool, collected demeanor. Most of the questions that Russell answered were met with a shrug or raised eyebrows.

Finally, I asked Russell about what the past six weeks had been like for him. He spoke of the exhausting travel and the anxiety of not knowing where he would spend the next few years of his life. And he also spoke of the attention that his comments in Chicago got.

“Yes, it definitely surprised me,” he said, after thinking about it for a moment. But Russell would not back down from his declaration that he was the top player in the draft class.

“It got more buzz than I expected,” he admitted with a shrug, pointing out that any player in his position should feel that he is the best player when he steps out on the floor.

“That wasn’t my intention,” he said. “But I do truly feel that way.”

Now, Lakers general manager Mitch Kupchak and the scores of basketball fans residing in Southern California hope that his self-confidence was well-founded.

“I can’t even talk right now,” Russell said to ESPN after he walked off the stage with Commissioner Silver. As he adjusted his brand new Los Angeles Lakers baseball cap, Russell got choked up.

“The journey that I’ve been through, the stress, the pain that my family has been through, it’s just tough. It’s a surreal moment that I can’t even explain.”

As Russell made his way from the stage to the interview room to meet the media, I flanked him. Russell sighed at least 10 times and looked around. He was taking the moment in, but would later reveal that he was surprised to have gone to the Lakers. Although there were reports originating from Los Angeles in the days leading up to the draft that Kupchak was leaning toward selecting him, Russell had no idea.

“Man, it’s a blessing to be here,” he said, nestled away in a quiet corner of Barclays Center a few minutes after his life had changed forever. “I can’t really put a nail on how I’m feeling right now. I feel like busting out like a baby in tears,” he said.

“I’m definitely surprised to be here right now. Just a few months ago, I was graduating high school,” he said.

And when asked directly whether he knew the Lakers were leaning toward him, Russell said he did not.

“I didn’t know at all. I’m still in shock… But I’m here, and I am ready to make an immediate impact.”

And it certainly did not take long for him to have the opportunity.

Russell joined a contingent of fellow young Lakers in Las Vegas to participate in the Vegas Summer League. Alongside Julius Randle, Tarik Black, Jordan Clarkson, Larry Nance, Jr. and Robert Upshaw, Russell was happy to finally be back to playing full-court basketball after having spent the past several months preparing for what life in the NBA would be like.

“Definitely,” he said when asked if it felt good to get back on the basketball court.

“To go against some different opponents finally, I know I haven’t played in a five-on-five setting since I started playing for the Lakers… College games, that was the last time.” 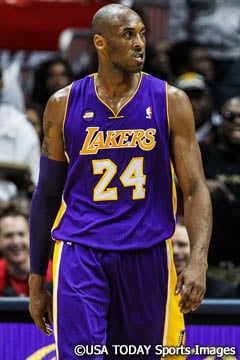 In his first taste of NBA competition, Russell took eight shots in 27 minutes and finished up with eight points, five rebounds and six assists. His Lakers lost an 81-68 decision to Karl-Anthony Towns’ Minnesota Timberwolves, but fortunately, these games do not count for anything.

“You could tell we were all rusty,” Russell said after the competition. “I was just trying to break sweat and get that first wind out. I was really just trying to fit in and gain chemistry as quick as possible.”

“Quick” is a rather appropriate term. The hope for all involved is that he can become an impact player in the immediate future, especially since Jahlil Okafor has seemed to hit the ground running with the Philadelphia 76ers.

Fair or not, that is who Russell will be linked with and compared to from here on out.

Although it does not count for much, Russell has already shown the keen point guard instincts and abilities that will be required of him to eventually call himself a peer of the likes of Damian Lillard, Stephen Curry or even Eric Bledsoe.

Russell has already shown the ability to utilize his size and strength. He has done an admirable job of keeping opposing point guards on his hip and using his physical attributes to keep defenders at bay and off balance. With his exquisite ability to see the floor, what it has enabled Russell to do is survey an opposing defensive scheme, determine where best to get the ball and create space and opportunities for his teammates. Something as simple as being a left-handed player, dribbling left and utilizing the left side of the basketball court and keeping an opposing guard away from the strong hand, it is a technique that Chris Paul has mastered over the course of his 10-year career. Despite not being impressively quick, Paul usually gets to where he wants to go on the floor, so if Russell has even a fraction of Paul’s ability to see the floor, it is not unreasonable to hope for comparable results.

Already, from Russell, we have seen an ability to understand space. On more than a few possessions over the course of his first two games, Russell has easily hidden behind screens and found opportunities for his own shots. He is a strong shooter and will, with repetition, probably become as strong of an off-the-dribble shooter as an in-prime Mike Bibby.

As a big man, rebounding and footwork are two things that are easily transferrable to an NBA court. As a point guard, the same thing can be said for court vision. Finding teammates backdoor, executing well-timed and well-placed bounce passes to big men rolling toward the basket and finding teammates on the weak side of the floor—these are all skills that the best of point guards possess. In flashes, Russell has already shown these abilities.

His journey is only beginning, but even at this early stage, having been there from what was the beginning of this process, it is easy to see why Kupchak and the Lakers opted to cut against the grain and pin the hopes of their franchise, at least partially, on the young point guard.

Back on draft night, as he marched from the stage that he shared with Commissioner Silver for a brief moment, Russell had tears in his eyes and a Los Angeles Lakers cap on his head.

From Central High School in Louisville, Kentucky to Florida’s Montverde Academy and to Ohio State University, Russell has shown tremendous promise and a polished and focused confidence from the very beginning.

“It was all a dream,” is what he probably thought in the moments immediately following his selection by the Lakers.

And now, it is a reality.

Russell has arrived and without Dwight Howard, and without Carmelo Anthony, Kevin Love, LaMarcus Aldridge or Marc Gasol, he is now the torchbearer for these Los Angeles Lakers.

All eyes are on him, but Russell will not shy away from the spotlight nor the expectations.

Yes, pressure busts pipes, but anyone who has spent time around Russell or has closely observed his game can already see a slight glistening.

Pressure bust pipes, but it also creates diamonds, and anyone within viewing range of Russell can already see the makings of a diamond—one that will eventually be of the 14-karat variety.