It’s Not Over for Joel Embiid

Back in October 2013, the Miami HEAT visited Brooklyn’s Barclays Center to take on Paul Pierce and the new-look Nets in a rather spirited preseason game.

I’ll never forget an interview from that night. I sat down with Greg Oden, who had recently signed a one-year, minimum contract with Miami in an attempt to rejuvenate his career.

Oden discussed what life was like as a youngster drafted with the expectations of the world thrust upon his mighty shoulders. He recalled the tribulations of his journey since being drafted with the first overall pick in the 2007 NBA Draft.

Having one’s career and promise waste away is bad enough—having scores of others continually remembering and reminding one another of the fact makes it even worse. That Oden was selected by the Portland Trail Blazers ahead of the likes of Kevin Durant, Al Horford and Joakim Noah—one MVP and two All-Stars—made his life a bit more miserable.

Less than a year later, when we had a chance encounter at Los Angeles International airport, Oden—after playing a total of just 212 minutes over the course of the 2013-14 season with the HEAT—told me that he wasn’t sure what his future held.

Embiid missed his entire rookie season after being the third overall pick in the 2014 NBA Draft because he needed surgery to repair a broken navicular bone in his right foot. Recently, it was reported that the 21-year-old would undergo a second surgery on his right foot that is expected to sideline him for the entire 2015-16 season.

In the days leading up to the 2014 NBA Draft, the topic of discussion was Embiid, how far he would slip and whether he would ultimately prove to be worth the risk to whichever team had the courage to select him.

With Bill Walton, Yao Ming and Zydrunas Ilgauskas each serving as cautionary tales, the world waited to see which general manager and team would take the ultimate risk on the young center whose promise made him worthy of being selected with the first overall pick. Sam Hinkie was, to nobody’s surprise, the willing GM since he can afford to be patient as the Sixers rebuild and “trust the process.”

It is sad to imagine that Jahlil Okafor will suit up for the Sixers before Embiid, but that is the reality. Now that we know Embiid will probably not play in his first regular season NBA game until the beginning of the 2016-17 season, let’s evaluate if Hinkie made the right decision at No. 3 and where Embiid’s career can go from here.

Of course, Embiid will draw comparisons to Oden. But at this point, the hope in Philadelphia is that he will end up more like Blake Griffin.

It seems so long ago that Griffin was selected with the first overall pick in the 2009 NBA Draft. In a draft that ended up being far deeper than anyone had imagined in the weeks leading up to it, Griffin was designated to be the only “sure thing,” which made the Los Angeles Clippers’ decision at No. 1 rather easy. Unlike Embiid, Griffin managed to take the floor for his Clippers. In his summer league debut, he scored 27 points and grabbed 12 rebounds in a dominant win over the Los Angeles Lakers, making Clippers fans very optimistic.

However, in the final preseason game of the 2009-10 season, Griffin sustained a stress fracture of his left kneecap. Initially, it was thought that Griffin would miss the first 20 games of the season or so, but after three months passed and Griffin’s kneecap did not show signs of improvement, it was decided that he would undergo surgery to repair the injury and miss the entirety of his rookie season.

Today, as we have grown accustomed to seeing Griffin defy gravity and play the game of basketball with reckless abandon and what seems to be a conscious disregard for human life, it is easy to forget the amount of concern there was for Griffin before things began for him. Few people remember that lost rookie campaign and the doubt that surrounded him at the time.

So, with Griffin as the example, it may be a bit premature to begin writing the obituary on Embiid’s career. The most natural question at this point, though, is whether the Sixers made a mistake in selecting the 21-year-old Cameroonian.

Obviously, hindsight is 20/20, so while the easy answer to that question seems to be “yes,” one could reasonably go the opposite way and still argue that Embiid was the right pick for the Sixers based on the information that was available to the franchise at the time. With Andrew Wiggins and Jabari Parker both off of the board, Embiid was still widely regarded as the next best thing, and quite a few other NBA teams would have selected him at number three as well. Remember, if healthy, Embiid was being discussed as a legitimate top overall selection. His stock was that high and executives loved his potential.

And truth be told, even with one year in the books, it is difficult to argue that Embiid was the wrong pick. Aaron Gordon, Julius Randle, Marcus Smart and Noah Vonleh each had injury issues of their own during the 2014-15 season, and now Dante Exum now joins that list as well with a torn ACL. Not to mention, fellow top picks like Vonleh, Nik Stauskas and others didn’t exactly shine in their rookie season. 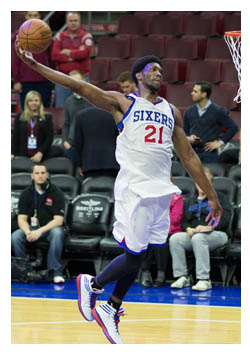 Taking the matter one step further, one could reasonably ask who would be selected with the third overall pick if the 2014 draft were redrafted today. Despite the concerns over his long-term health, one could still make a case for Embiid. The grace and fluidity of his movements on the court were jaw-droppingly impressive. That Embiid has modeled parts of his game after Hall-of-Famer Hakeem Olajuwon and didn’t begin playing basketball until 15 years old only underscores the fact that he has an immense amount of untapped potential and could, in theory, help to fortify the interior for an NBA team.

If there is one thing that observing the pre-draft process has taught us over the past few years, it is that there are very few sure things as it relates to NBA prospects. Despite the advances in statistical and medical measures, there are certain intangibles that no amount of screening can measure, and most often, it is those intangibles that determine which NBA prospects sink or swim.

Obviously, the ability to stand up to the rigors of an 82-game regular season goes a long way toward fulfilling one’s potential and being a plus-contributor, but it is simply too early to admit defeat with regard to Embiid. And it is certainly too early to determine that the Sixers made a mistake in drafting a big man with such a high ceiling.

With Jahlil Okafor rising as the face of the franchise, the Sixers can simply focus on rehabbing Embiid and bringing him along slowly and carefully. With good fortune, in the long run, missing the first two seasons of his career may just be a meaningless footnote in the grand scheme of things.

As the years progress, it will become more and more evident that with the likes of Victor Oladipo, Otto Porter, Alex Len, Nerlens Noel, Kentavious Caldwell-Pope and Giannis Antetokounmpo (to name a few), the 2013 draft class will be understood to be a much deeper class than many of us had anticipated.

After just one year, the same cannot be said for the 2014 draft class. Regardless as to which stance you take, it is too early to designate the class as being one that is full of studs or comprised mostly of duds – a surprise considering how much hype surrounded the class of players in the years leading up to their arrival.

Similarly, despite a season-ending setback for the second consecutive season, it is too early to label Embiid a bust or give up on his NBA career. Despite it all, at just 21 years old, it is still possible that the best and brightest days for the phenom are still ahead.

At this point, even Greg Oden would agree with that.