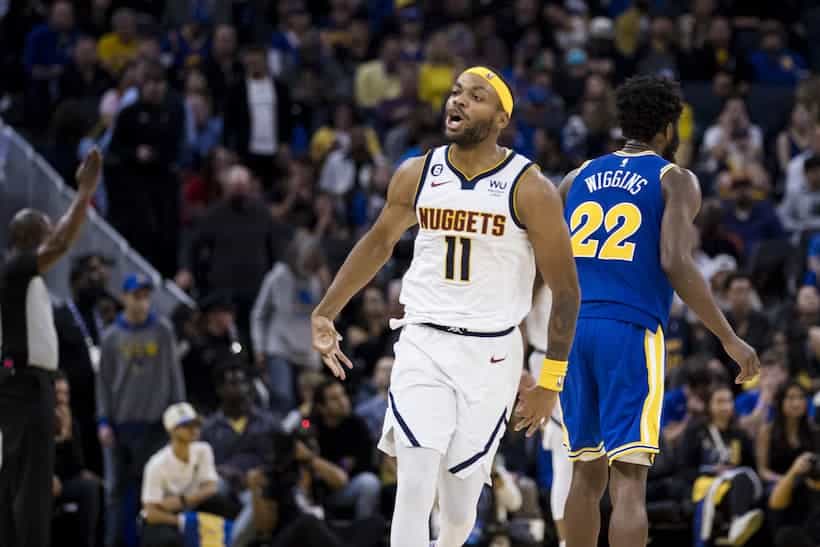 There were more than a few blow-outs in the NBA last night. Four of the seven team that played last night lost by a double-digit margin. Still, we had some exciting plays happen across the league and we’re here to rank them. Next, we’ll take a look at the top 10 plays from Monday night’s action.

In the first quarter of Memphis vs San Antonio last night, second-year pro Ziaire Williams drove to the basket without hesitation. He quickly crossed over a Spurs player and double-clutched a layup on the right side of the basket. Williams drew the contact and converted the and-one. Memphis would go on to win the game 121-113.

Beachamp has played in 29 of Milwaukee’s 40 games this season and the rookie is finding his role with the team. He has eight starts as well on the season and the best highlight of his career may have been last night vs the Knicks. Jrue Holiday missed a three-pointer and Beachamp was sky-high to grab the rebound and slam it don for a viscous dunk all in one motion. Milwaukee pulled off the comeback win vs New York, 111-107.

Jarren Jackson Jr. has elevated the Memphis Grizzlies and their defense since his return. Last night vs the Spurs he finished with five blocks and had two in a row after back-to-back blocks in the same sequence. Jakob Poeltl attempted a shot that was rejected by Jackson Jr and rookie Jermey Sochan got the rebound and got his attempt blocked as well. The Grizzlies won the game 121-113. Jackson Jr. finished with 16 points, 6 rebounds, and 5 blocks.

7. Domontas Sabonis threads the needle through three defenders for the assist

All-star PF Domontad Sabonis is the definition of a point-forward in this league. Nikola Jokic and himself are easily the two best passing big men in the league. Sabonis leads the Kings with (6.8) assists per game this season while also scoring (18.7) per. Last night, Sabonis set a screen for Malik Monk and got an easy dunk after the big man threaded the needle and put a pass through three defenders.

The New York Knicks crumbled the game vs the Milwaukee Bucks last night at home to lose 111-107. In the game, Julius Randle was on the excellent defender in Jrue Holiday. He was mismatched however, and Randle was getting easy position in the post. Two-time MVP Giannis Antetokounmpo saw Holiday needed help on defense and blocked Randle’s shot attempt off the glass. Randle would have likely scored if not for Giannis’ stellar block.

5. Daniel Gafford splits the defense for a one-handed and-one dunk

The Wizards lost by 20 last night to a short-handed New Orleans Pelicans squad. Daniel Gafford took a pass in the fourth quarter and drove to the basket to split the defense and throw down a one-handed slam in which he was also fouled. Gafford split Jonas Valanciunas and Jaxson Hayes to throw down the dunk.

For much of the game last night, the Milwaukee Bucks were fighting to stay alive vs the New York Knicks. Jalen Brunson has a career-high 44 points, but it wasn’t enough to stop Milwaukee in the end. Jrue Holiday nailed a clutch step-back three when Milwaukee had a 100-99 lead with less than a minute left in the game. Holiday and the Bucks would scrape out a 111-107 win vs the Knicks last night.

JRUE KNOCKS IT DOWN!! pic.twitter.com/6SK2q1FNvQ

3. Denver rookie Christian Brown dishes a behind the back no-look assist

The Denver Nuggets easily handled the LA Lakers last night and some of the bottom of the bench players made an appearance for the team. Rookie Christian Brown had the ball with under a minute left and drove to the basket and threw a behind the back assist to his teammate for the easy slam. His assist was the final bucket of the night for Denver as they went on to win 122-109.

New Orleans were short-handed on the road last night vs the Washington Wizards, but that did not affect the team. CJ McCollum had a 34-point outing for the Pelicans as they easily won their 25th game of the season. When the game was still relatively close, Najee Marshall threw a half-court alley-oop to Trey Murph III who threw down the slam in the third quarter. The Pelicans are showing the rest of the NBA just how much depth they have on their team.

1. Bruce Brown beats the buzzer to end the third quarter

Bruce Brown had s stellar season with Brooklyn last year and that earned him his contract with the Nuggets this year. Last night in their 122-109 win vs the Lakers, Brown took a pass and went the entire length of the floor to put up a one handed runner in full speed and beat the buzzer to end the third. This extended Denver’s lead tp 94-79 heading into the fourth.