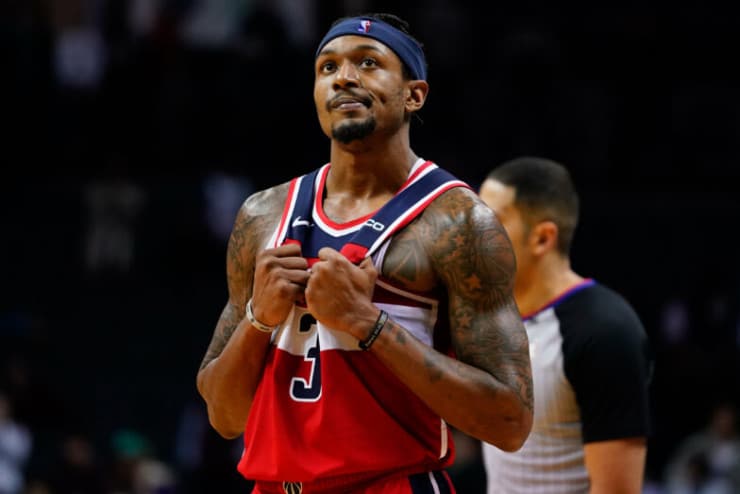 This NBA offseason has been a frustrating one for some die-hard fans, especially Washington Wizards‘ fans. On June 18, 2021, news broke concerning shooting guard Bradley Beal announcing his commitment to play for the USA Basketball Men’s National Team. A few weeks ago, it was reported by USA Basketball that Beal would not play in the Tokyo Olympics. And, this was because the 28-year-old three-time NBA All-Star had to enter the COVID-19 health and safety protocols. This was a once-in-a-lifetime opportunity for the Missouri native.

In an interview published by CBS Sports on July 15, 2021, regarding the chance to play for USA Basketball, Beal told CBS’ Michael Kaskey-Blomain, “It’s an honor. It’s something that you take for granted. Not a lot of guys in the league get this opportunity. We all know that. We didn’t live up to what we wanted to a few years ago (in the 2019 FIBA World Cup), and so now we have an opportunity to get back what’s rightfully ours.”

In 2010, Beal won the FIBA-Under 17 World Cup MVP. Though, everyone can see his passion for basketball. Needless to say, it is an awful experience for any athlete to have to bow out of the Olympics. In addition to this unfortunate news, there is all kinds of speculation across the Internet concerning Beal’s future with the Wizards. From Boston.com, it was reported two days ago that Beal would welcome a trade if he was moved to the Boston Celtics. The report also included three other teams: Golden State Warriors, Miami Heat, and Philadelphia 76ers. This latest news information was originally reported by Bleacher Report’s Jake Fischer. Last Saturday, Fischer stated, “Boston’s path to securing Beal would appear far more costly, as the Celtics’ offer almost certainly has to include Jaylen Brown and all of their future draft picks they are able to part with.”

Word has spread across front offices around the NBA: Bradley Beal is weighing whether to request a trade from the Washington Wizards.

“He knows he has to make a decision before the draft,” said one source with knowledge of Beal’s thinking. More @BR_NBA: https://t.co/M1vhNx0ZRn

Although the report could still be accurate, many fans are asking for more evidence to help support this claim. This is Beal’s team; he was drafted by Washington third overall in the 2012 NBA Draft. Would the Wizards be wiling to trade their star player for Jaylen Brown and potential future draft picks? This remains to be seen. Plus, everyone should keep in mind that although Beal was open to a trade, at least he never demanded an immediate trade. The latest news is likely just trade rumors and meaningless gossip.

Moreover, the 2020-21 Wizards finished 34-38 (.472), ranking third in the Southeast Division and eighth overall in the Eastern Conference. The team lost four games to one in the first round of the postseason against the 76ers. The Wizards have not appeared in the NBA Finals since the 1978-79 season, and they have not won the championship since the 1977-78 season, when they defeated the Seattle Supersonics in Game 7 105-99. Not to mention, the Wizards were called the Bullets back then.

After the season ended, the organization agreed to part ways with head coach Scott Brooks. Perhaps Coach Brooks leaving the team is leading Beal to ask more questions about his own future. According to one report by NBC’s Pro Basketball Talk, Beal was irked over the organization hiring Wes Unseld Jr. over Sam Cassell for the vacant head coach position. How much does this play into trade talks?

Well, we all know that Beal is a competitive player, so three consecutive losing seasons by Washington might not be cutting it for him. Then again, a great player should be willing to give a new coach a chance. Last season, in 60 games played, the six-foot-three guard averaged 31.3 points, 4.7 rebounds, and 4.4 assists per game. The 9-year NBA veteran also shot 48.5 percent from the field and 34.9 percent from beyond the arc. In the 2021 All-Star Game, in 31 minutes played, Beal scored 26 points.

On October 17, 2019, Beal signed a two-year, $72 million extension with Washington. He earned $28.7 million this past season, and he will earn $34.5 million in the upcoming 2021-22 season. Beal’s player option for the 2022-23 season is also $37.2 million. So, folks should keep in mind that Beal is still showing his loyalty to the Wizards. He is only considering a trade request before the draft. The key word here is “considering.” Having said this, not even LeBron James is safe from a trade in this league. Ok, maybe only James is safe.