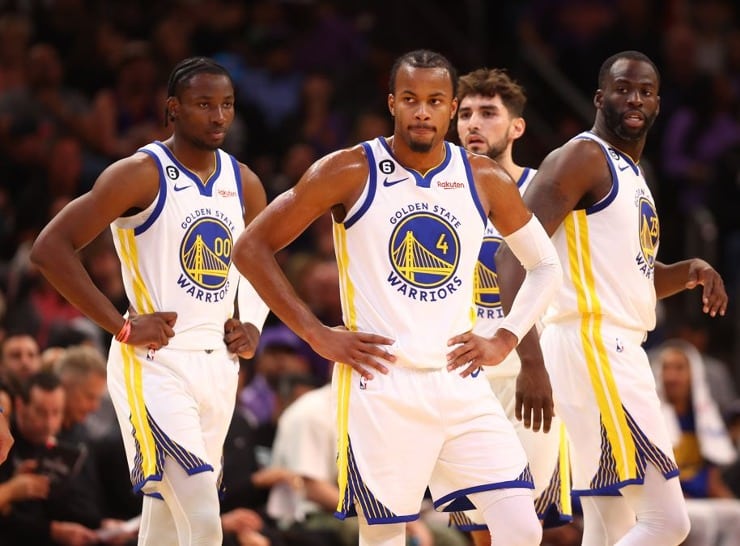 One of the latest NBA trade rumors pertains to Golden State Warriors general manager Bob Myers dealing away Jonathan Kuminga, James Wiseman, and Moses Moody for a solid wing and future draft picks. However, that scenario is unlikely for a few logical reasons.

“The Warriors have greater interest in adding a versatile multi-positional wing than an extra big man, per those sources,” reports Anthony Slater of The Athletic. “Assuming health, either Draymond Green, Looney or both will be on the floor in almost every relevant playoff minute…”

The three recent lottery picks remain likely to be with Golden State beyond the deadline.https://t.co/OU1CMtndZX pic.twitter.com/MCNyjuu76V

“So the priority would be to add an adaptable rotation option who could upsize and downsize depending on who else Steve Kerr is using at any given time,” added Slater. “This is also why Kuminga, Wiseman and Moody remain likely to be with the Warriors beyond the deadline.

“They aren’t actively shopping their three recent lottery picks, according to those sources with knowledge of the Warriors’ thinking. That isn’t to say they couldn’t be moved in the right deal, but a rival team hoping to obtain them would be searching to get Moody or Wiseman on a bargain, and the Warriors aren’t in sell-low mode.”

If the price is right, Golden State should be interested in trading for Washington Wizards breakout star Kyle Kuzma. Of course, Wizards G.M. Tommy Sheppard expects fair compensation, in the event a team engages in trade talks. The Warriors would probably have to trade at least Kuminga and a first-rounder to acquire Kuzma.

Additionally, the fifth-year wing is having the best season of his career. Kuzma is averaging career highs of 21.7 points and 4.0 assists per game. Plus, along with logging 7.6 rebounds per game, the Utah product is shooting a career-best 45.7% from the field and 33.8% beyond the arc.

Some of these NBA trade rumors are misleading. Golden State has enough big-man depth as it is. The Warriors losing one of their top-3 centers for a decent forward in return would potentially be a blessing in disguise. It’s not like the team is dominating the paint with this current roster. The Dubs are allowing 117.9 points per game, which ranks 26th overall.

Sources: Malik Beasley has requested a trade. The Golden State Warriors & the Miami Heat appear to be front-runners to land this fantastic player.

At the moment, Jakob Poeltl of the San Antonio Spurs is another trade target for Golden State’s front office. San Antonio is undergoing a rebuild, so there’s a chance another team will make a sound offer. The seventh-year center might end up in the Bay Area. But the Celtics and Toronto Raptors are also interested, per multiple reports.

For the Warriors, adding a veteran center into the mix would help embrace the old, cliché philosophy of quality, not quantity. Nonetheless, one of the three Golden State centers mentioned here would be the odd man out. Is Myers bluffing? Only time will tell. Other NBA trade rumors are on the main page.