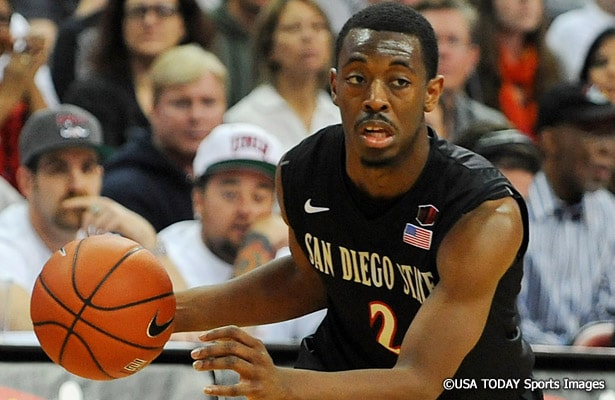 Day three of the 2014 NCAA Tournament is over. Dayton made headlines again, upsetting Syracuse after defeating Ohio State in the first round.

Who shined the brightest on the third day of March Madness? Basketball Insiders put together a list of the day’s studs:

Thames picked up today where he left off on Thursday. He scored 30 points on 9-of-19 shooting from the field, and made 4-of-9 from the three point line. He also contributed one rebound, six assists and one steal. Thames is not currently projected to be picked in the upcoming NBA draft. However, the senior has played well in the tournament so far and after scoring nearly half of his team’s points in today’s win, he earns a spot on today’s list of studs.

Dayton Flyers – First (11) Dayton upset in-state rival Ohio State. The Flyers then set their sights on (3) Syracuse. Dayton faced the best zone defense in college basketball and managed to manufacture open looks with crisp ball movement. In addition, the team managed to shut down Syracuse from three point range, holding them to 0-for-10. Dayton is now 11-0 when it holds its opponents under 60 points.

Dayton featured its usual balanced attack, tonight led by Dyshawn Pierre. Pierre scored 14 points on 5-of-12 shooting from the field and 1-of-2 from three point range. He also contributed six rebounds and one block. Jordan Sibert also contributed 10 points and hit a big three-pointer with 47 seconds to go to extend Dayton’s lead to 52-46. Sibert also contributed four rebounds, two assists and two steals. The bracket-busting Flyers move on to the next round, where they will face either Kansas or Stanford.

Branden Dawson, Michigan State – On opening day, senior power forward Adreian Payne erupted for a career-high 41 points. Payne was the biggest star on opening night and led the (4) Spartans over the Delaware Fightin Blue Hens. On Saturday, Payne came back to earth and scored 12 points.

Taking the lead this time was Branden Dawson, who scored 26 points (a career-high) on 12-of-15 shooting from the field, and 2-of-2 from the free throw line. Dawson also contributed nine rebounds, one assist and one steal. (12) Harvard made it interesting by overcoming a 16-point deficit, and took the lead 62-60 on a three-pointer from Laurent Rivard. Travice Trice responded with a three-pointer of his own, and the Spartans would never trail after that.

Dawson is a junior, but if he declares for the draft this year he projects to go in the second round. If Dawson can help Michigan State advance deeper in the tournament with more performances like this, he could help his stock and grab the attention of teams looking for a physical wing player who features a developing post game.

Joseph Young, Oregon – After advancing past BYU, (7) Oregon faced (2) Wisconsin. The Ducks pushed the Badgers, leading at halftime by 12. The Ducks were led by Joseph Young, who scored 29 points on 10-of-19 shooting from the field, 4-of-7 from three point range and 5-of-6 from the free throw line. Young also contributed three rebounds and two assists. However, the Badgers fought back in the second half and took a 77-75 lead on a Ben Brust three pointer with 1:09 left in the game.

Young had an opportunity late in the game to tie the score, but missed a three-pointer. Credit Young for having an efficient night and putting the Ducks in a position to knock off the Badgers. In spite of the loss, Young earned himself a slot in tonight’s list of studs.

Shabazz Napier, Connecticut – Shabazz Napier makes the studs list for the second time this tournament after leading (7) Connecticut over (2) Villanova. Napier scored  25 points on 9-of-13 shooting from the field, 4-of-8 from the three point line and 3-of-4 from the free throw line. Napier also contributed  five rebounds, three assists and two steals. At one point, Napier hit three consecutive three pointers to put the Huskies ahead 54-45 with roughly six minutes left in the game. Last year the Wildcats were able to slow down Napier, but couldn’t stop him this time around, and that was the difference in this game.

The senior guard has come a long way in his development and is now showcasing himself before leaving Connecticut for the NBA. Napier currently projects as a second-round pick. With performances like this, expect general managers to take a closer look at the electric point guard this summer.

Which player impressed you the most on Friday? Leave your thoughts in the comment section.