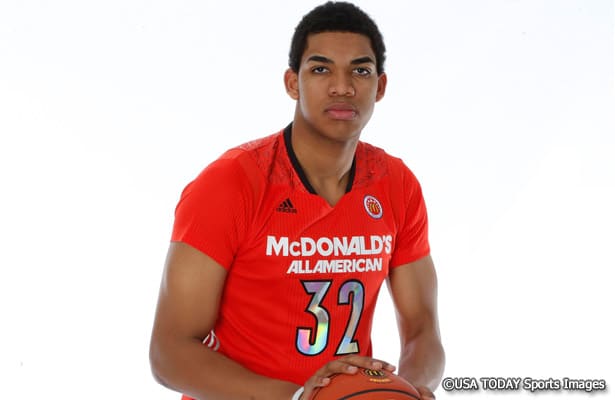 Today was my first day in Portland at the Nike Hoop Summit, an annual event pitting 10 US high school seniors against some of the best U-20 players from the rest of the world.  The full rosters are available here. Over 100 scouts and executives were able to take in an hour and a half World Team practice and a 40-minute Team USA scrimmage against local collegians.  The World team practice consisted mostly of intrasquad scrimmaging and five-on-five drills.  Given the small sample size, it would be premature to provide full scouting reports on the players in attendance, but a few things stood out today.

The Kentucky commit and Dominican Republic national teamer was outstanding shooting the ball, making well over 50 percent of his NBA threes during shooting drills and draining them in the team scrimmage as well.  He also has a quick, compact release without bringing the ball down to his waist like many shooters.  Shooting  is an increasingly prized asset among big men, as more and more evidence is showing that bigs who can stroke the three are a tremendous boon to NBA offenses.  Most NBA teams like to have their centers hang back on the pick-and-roll to protect the lane, but big men who can pick-and-pop from beyond the arc obviate that strategy.

At 7’0 with a 7’3.5 wingspan and 9’5 standing reach, Towns has legitimate center size.  He also has a relatively high skill level in the post for this point in his career, with decent touch on jump and one-legged hooks with both hands.  He can also put the ball on the floor off closeouts, and had a spectacular dunk over Nikola Jokic off one foot after his man had to rush out to guard him.  He also has decent passing vision, although he does revel in some rather insouciant pass fakes from the post.

Towns does have little two-foot explosiveness at this point, so he’s not going to go over or through people after receiving passes inside. He will also need to learn to absorb contact when finishing. Towns did not do much on the glass today, and like most big men his age he got winded at times during the scrimmage.* Defensively, he showed the ability to challenge shots with his length and moves his feet laterally relatively well for his size.  He was matched up quite a bit with the stronger Trey Lyles, but managed to avoid getting beat up down low.

*These can be hard because there are not any TV breaks and few timeouts.

Personality-wise, it is clear that he is not a natural “beast” the way one would prefer in a big man. But it is clear he is also trying to work on that, making a big effort to talk on defense in contrast to a lot of the (admittedly ESL) World players and celebrating after big plays like the aforementioned dunk.

But Towns’ shooting ability is what really made him stand out.  As team USA’s roster shows, high schoolers at any position who can stroke the NBA three are rarities; legitimate centers who can do so are almost unheard of. His coaches deserve credit for letting him develop that skill instead of pigeonholing him into playing exclusively in the post.

This 6’6 Ukrainian burst onto the scene last summer with a dominating performance for his national team at the U-16 European championships.

*You are going to want to check out the in and out dribble at the 3:35 mark.

He does not turn 17 until June, so he is basically the age of a young high school junior.  He may be the best young European prospect since Ricky Rubio, and possibly the best offensive wing on either team right now.  Mykhailiuk deferred throughout the first half of the scrimmages; he got few opportunities playing at the three in an offense with a two guard front and two post players. But once he got the chance to handle the ball out top, he immediately made an impact and looked like the best player on the court–no small feat considering the World team has players as old as 19.  He drained three NBA threes, including one from three feet behind the line off the dribble on a pick-and-roll going to his right.  He has excellent form and a quick release on his jumper, utilizing the two foot “hop” to square his body to the target.

What really sets him apart from the typical European wing prospect is his athleticism.  He is excellent off one foot, even getting an alley oop run for him out of a timeout in the scrimmage.  Some Europeans are good off one, but Mykhailiuk can get up off two feet as well. He looks like he can be an above-average NBA athlete on the wing, with athleticism that could be comparable to a young Manu Ginobili if he continues to develop.

Mykhailiuk also has solid feel and a reputation as a good passer, although he wasn’t really able to handle enough to show that aspect of his game today.  The Ukrainian also has solid lateral quickness and good hands defensively, though he is of course quite thin at this point in time.  Of all the prospects here, Mykhailiuk is the one I was most looking forward to seeing, and he did not disappoint at all on day one.  It will be fascinating to see him go up against the stronger American wing defenders like Justise Winslow and Stanley Johnson in the game on Saturday, although the coaching staff may not feature him as much as older prospects whose draft fates are more likely to be helped by playing well.

Talk has been that Team USA is trying harder to win this year, notably by bringing the prospects in earlier for additional practices to compete with the World team. However, the squad is almost devoid of shooters, to the point that the team made precisely two jumpers outside the paint in the entire 40 minute scrimmage.  While the team features solid post players like Chicagoans Jahlil Okafor and Cliff Alexander, they were completely unable to make the defense pay for double teaming.  The game against the local collegians was ugly, although Team USA was able to assert itself defensively.  Stanley Johnson was particularly outstanding on that end, coming up with numerous steals on-ball, in the passing lanes and even denying the ball inbounds.

It seems like this USA team, while full of seemingly high character kids, may struggle.  Perhaps even more important than the lack of shooting is that this 2014 class lacks the kind of dominant scorers Team USA usually has at point guard and on the wings.  Meanwhile, the World team features much more athleticism of late with the inclusion of more U.S.-based players like Emmanuel Mudiay, Trey Lyles and Towns, along with European-based Clint Capela and Mykhailiuk.

Up next tomorrow: Two Team USA practices and one World team practice, followed by the game on Saturday. Stay tuned for more updates, and full scouting reports on every player in attendance.