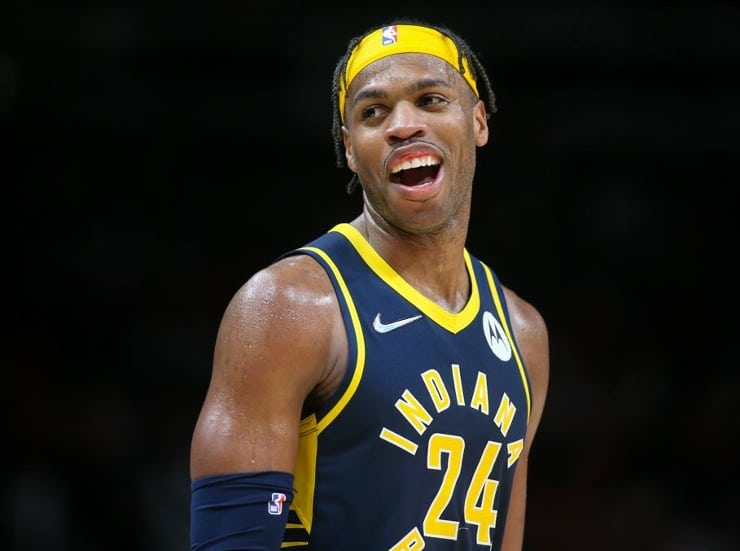 Per multiple NBA betting sites, the Pacers have bottom-five odds of winning the championship in 2023. Though, some sportsbooks are not ruling out a playoff appearance. Find out which oddsmakers are giving them a chance.

Of course, the Los Angeles Lakers have two first-round draft picks for a blockbuster trade. However, G.M. Rob Pelinka decided to pass on Hield. He was not the only one.

According to The Athletic, the Pacers were seeking the Lakers’ two first-round draft picks, nothing less.

All Lakers’ stakeholders, head coach Darvin Ham, the Buss family, and Pelinka were on the fence on whether or not to trade Russell Westbrook. So, a deal was never made.

They wanted the decision to be unanimous. This trade could have worked. While his defense is questionable, Hield’s shooting accuracy would have helped the Lakers.

Additionally, teams are not interested in trading for Brooklyn Nets guard Kyrie Irving at the moment. Per sources, this news includes Los Angeles. It means the Lakers will try to win a championship with Russell Westbrook.

During Hield’s rookie 2016-17 season with the New Orleans Pelicans and Sacramento Kings, Hield averaged 10.6 points, 3.3 rebounds, and 1.5 assists per contest in 82 games played. He was then selected to the NBA All-Rookie First Team.

we play basketball this week!👏 pic.twitter.com/pDFTUwuAiK

In February, the Kings traded Hield and Tyrese Haliburton to the Pacers for Justin Holiday, Jeremy Lamb, Domantas Sabonis, and a 2023 second-round draft pick.

In 26 starts with the Pacers last season, the Oklahoma product averaged 18.2 points, 5.1 rebounds, 4.8 assists, and 1 steal per game. Therefore, the team is better off keeping Hield.

On February 11, 2022, the guard made his Pacers debut against the Cleveland Cavaliers. In the Pacers’ 120-113 loss, Hield almost recorded a triple-double, amassing 16 points, 9 rebounds, and 8 assists.

Buddy Hield turns 30 this December. Unless G.M. Chad Buchanan is aiming to trade for a superstar, the Pacers are better off retaining the Bahamian. Returning to the playoffs should be one of Buchanan’s goals. It might be in Hield’s best interest to stay as well.