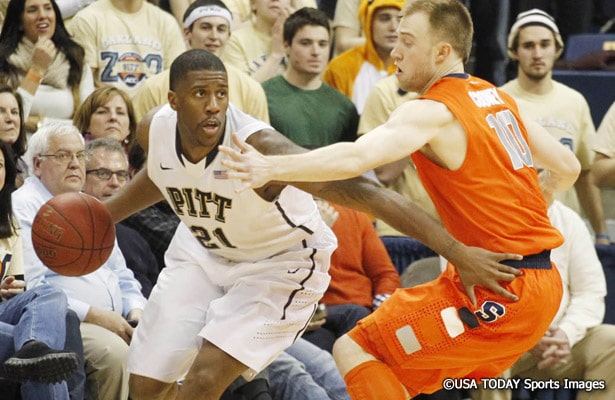 In today’s day and age, it’s quite common for basketball players to cross train. Whether it be in boxing, mixed martial arts, soccer, etc.  there’s almost always something that can be taken away from training in a different sport that helps on the basketball court.

Chess may only be a sport under the loosest of definitions, but in the case of Pittsburgh’s Lamar Patterson, it has served as a great source of cross training.

Patterson, a 6’5 senior shooting guard who has climbed the draft boards at a rapid rate in his final year of eligibility, is not going to be mentioned among the top athletes in the draft. He’s not going to measure in with a 40+ inch vertical or come in with the quickest full-court sprint time at the 2014 NBA Draft Combine.

Yet, he is very likely to hear his name called on draft night in June because he has still found a way to be an effective player at the highest level. What he lacks in vertical explosiveness and pure speed, he makes up for with his high basketball IQ and natural instincts.

“When I was younger I used to love chess,” Patterson said. “When I used to play chess, you basically have to be a step or two ahead of your opponent and that’s basically how basketball is, for me at least. You have to think ahead and see the play develop before it actually happens.

“I always like guys like Jason Kidd. He was never really that athletic, but he was a great player. He always had the mindset, the IQ that gave him an edge on different people and other players.  Basketball is a strategic game also as it is an athletic game; you use power and strength. If you have the mind right you can be an effective player.”

Patterson has had to answer questions about his athleticism, or lack thereof, throughout his career. This season, in which he is averaging 17 points, four rebounds and four assists for the 20-7 Panthers, is the biggest testament yet that he has what it takes to be a pro.

“I like to say guys who don’t rely their game on athleticism usually last longer in the NBA because once the wheels start falling off [the athletic players] don’t know how to play the game,” Patterson said. “I never really depend on being superior in that category so I know how to adjust and use my mind and use my basketball IQ to be effective on the court.”

This offseason, Patterson really focused on his conditioning and ensured that he would enter the season in the best shape of his life. He did so upon the advice of his older brother Perry Patterson, who was a quarterback at Syracuse from 2004-06. Perry threw for 1,865 and 12 touchdowns in his senior year. Like Lamar with basketball, Perry grew up dreaming of playing football professionally. His pursuit of an NFL career came up short, though, and he doesn’t want to see his brother suffer the same fate.

“He’s always been in my ear saying, ‘You’ve seen what happened to me and you’re so close right now. Just don’t let the same thing happen to you.’” Patterson said. “I’ll definitely have to give that to my brother.”

One of the areas where Patterson’s offseason work has paid off the most is with his three-point shooting. Patterson is hitting threes at a 39 percent clip this year, and has already made 15 more threes this season than any other year in his career with four games left in the regular season along with the ACC postseason tournament and the NCAA tournament.

“I always love to just shoot,” Patterson said. “I could shoot for hours. Summer time, I couldn’t even tell you [how many shots I attempted] because I never kept count, but I never really believed in keeping count. I always like to shoot until my arms got tired. It started to pay off.”

Patterson’s strength is in his all-around game, though. He can contribute in a variety of ways and has gone from being a role player to star over the span of four years. Some talent evaluators and decision makers will look at the fact that he is a 23-year-old senior as a negative, but it’s because of his age that he has such a good understanding of how he can be most effective on the court and why he’s so physically prepared for play in the NBA.

Throughout his time at Pittsburgh he’s shown a tremendous amount of growth. This year has been the biggest step forward in his development yet, but Patterson believes there’s still much more to come.

With the 2014 NBA Draft fast approaching, Basketball Insiders will continue to take a look at some of the top prospects in the country and tell their stories. Make sure to stay tuned as later this week we’ll feature California’s Justin Cobbs and Arizona State’s Jordan Bachynski.