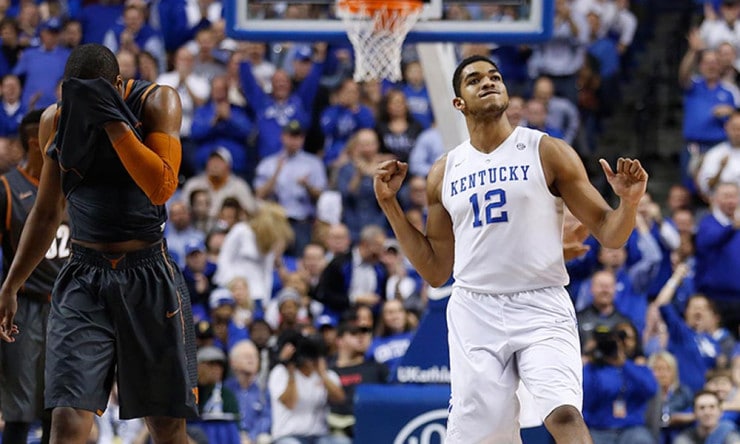 After having some issues with the size and physicality of Purdue, the Cincinnati Bearcats came out with a different level of intensity against the Wildcats in the Round of 32. However, just like every opponent the Wildcats have faced so far this year, it was only enough to hang close for a short period. They led 24-23 when Tyler Ulis found Willie Cauley-Stein for what may be quite possibly the nastiest poster dunk of the tournament so far. The Wildcats never trailed after that slam and eventually pulled away from the Bearcats, 64-51, for a spot in the Sweet Sixteen and a matchup against Bob Huggins and the West Virginia Mountaineers. The Bearcats had some success in defending the Wildcats with a matchup zone, which perhaps may be something the Mountaineers can try to emulate themselves. Still, no matter how good or bad their offense is, the Wildcats are still the tournament’s most imposing team defensively. They held Cincy to 31 percent shooting from the field, 14 percent from deep and forced 14 turnovers as well. It’s hard to imagine them not surviving and advancing if they continue to lock down opposing offenses like that. Also, don’t expect for the Wildcats to allow 21 offensive rebounds again as they did against Cincinnati; that was extremely out of the ordinary for them.

With most of their lineup in tact including Juwan Staten and Gary Browne, the Mountaineers reached the Sweet Sixteen after they were a trendy 5-12 upset pick only a few days ago. For the second game in the tournament, West Virginia used its length and athleticism to control the tempo against Maryland. The Mountaineers picked up 11 steals on Sunday – just about their national leading average (10.9). One of the keys was to keep Maryland off the charity stripe, and WVU succeeded by limiting the Terps to 13 attempts and 9 makes. Devin Williams finished with 16 points and 10 rebounds while aiding the WVU defense. On the season, WVU has yet to lose when keeping teams under 70. That now becomes the key against top-ranked Kentucky in the next round. After forcing Maryland into 20+ turnovers and keeping them off the free throw line (therefore limiting easy points), WVU played to their blueprint. Bob Huggins quipped after the game that it was “beautiful.” A Sweet Sixteen matchup with undefeated Kentucky may seem daunting, but neither side forgets the 1-2 seed showdown in 2010 in which the Wildcats struggled to solve the WVU defense and fell in the regional final. John Wall and DeMarcus Cousins believe that Kentucky team was better, prodding this year’s Cats team to finish the year off perfect. The winner would in all likelihood be the favorite to come out of the region next weekend.